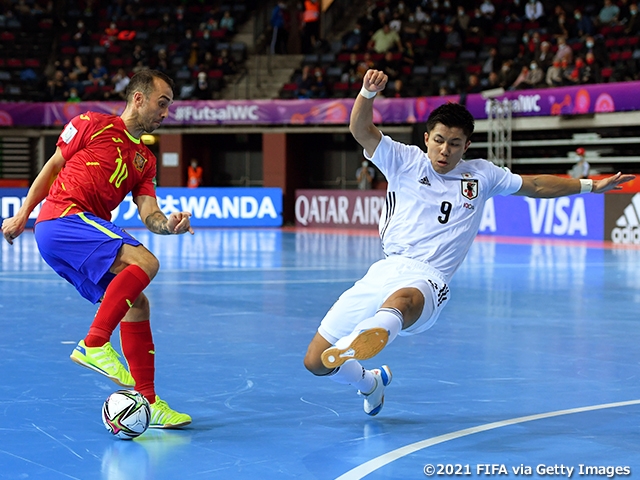 Ahead of the match, coach Bruno GARCIA gave a pep-talk to the team, “20% of the people watching this match will be focused on the technical aspects of futsal. The remaining 80% will be enjoying the exciting and spectacular nature of futsal.” The coach went onto mention, “All of those people will be watching how you play. They will be watching how you make runs until the end, how you throw out your body to make a save, and your determination to win the match. As a member of the national team, it is your obligation to showcase a performance that can send a message to the viewers. That is what ‘fighting from you heart’ means.” The Spanish coach concluded the meeting by saying, “What is on your left chest? It is the emblem of Japan National Team. Today is going to be our day!”

Following their win over Angola, coach Garcia named PIRES Higor in goal, with YOSHIKAWA Tomoki, SHIMIZU Kazuya, HENMI Katsutoshi Rafael, and OLIVEIRA Arthur as the starting field players. Entering the match with a 4-0 formation, where they placed no pivot, Spain scored the opening goal when BORJA converted a cutback in the fourth minute.

Despite conceding the opening goal, Japan showcased great composure to equalise a minute later, when MUROTA Yuki and NISHITANI Ryosuke forced a turnover deep in the opposing end, setting up the shot of HOSHI Shota, which deflected off a Spanish defender before finding the back of the net. With the team gaining momentum from the equaliser, Henmi scored a goal in the eighth minute to give Japan the lead.

The two sides displayed an evenly matched performance, but it was Japan who showed their efficiency in defence while Spain made uncharacteristic errors. Shimizu and Yoshikawa created opportunities by applying aggressive pressure to force turnovers, as they struck shots that threatened the Spanish goal. Spain also had their moments as ADRI and SOLANO took advantage of their individual skills to create chances.

With 17 seconds remaining in the first half, Japan committed their sixth foul, when HOSHI Ryuta’s sliding tackle was called a foul. Despite giving Spain a chance to score from the second PK mark, Japanese goalkeeper PIRES made a spectacular save to preserve the lead into halftime. 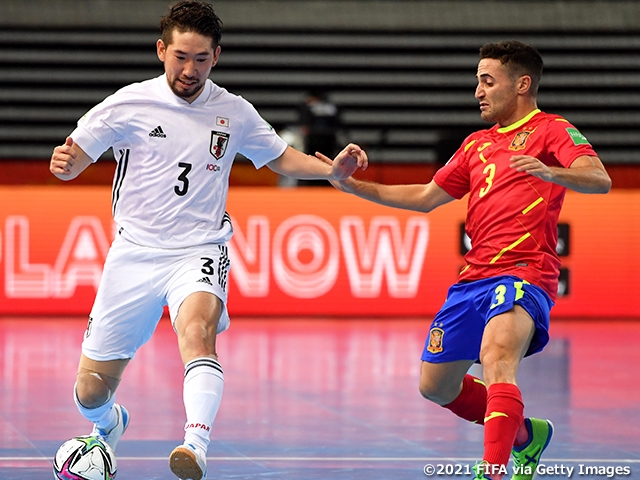 In the early minutes of the second period, MORIMURA Takashi made his first appearance in this World Cup, as he stepped up to take the free kick earned by Shimizu. Despite getting his shot blocked by the goalkeeper, the lefty gave Japan a boost to their momentum, as he made effective runs in the attacking third to create opportunities.

While Japan continued to build their game around defence, Spain made their adjustments during halftime, applying more pressure to contain the Japanese players from pressing forward. In the 26th minute, CHINO converted the cross delivered by Solano to equalise the match. Despite the efforts made by Japan to score a goal, it was once again Spain who scored the next goal, as CAMPOS converted a free kick in the 30th minute.

After the two sides exchanged several chances back and forth, Japan deployed their powerplay with two minutes remaining on the clock. However, their attempt gets countered by the opponent, as Spain struck a shot from distance that sailed into the open goal, doubling their lead in the closing minutes. Despite leading the match at halftime, Japan lost the match 2-4. 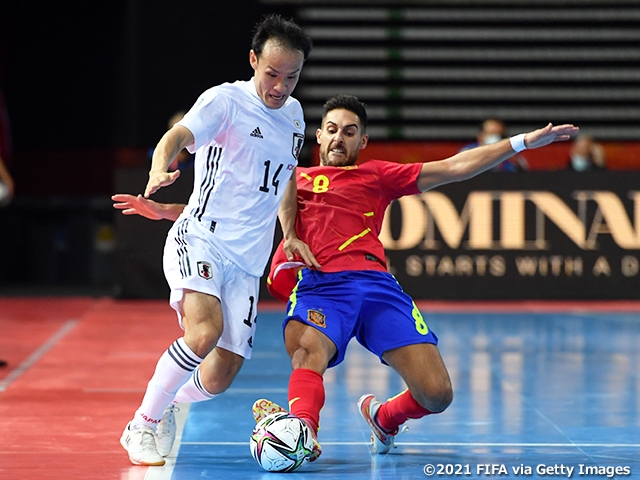 In the other match played in Group E, Paraguay defeated Angola 4-1. With Japan and Paraguay sharing a record of a win and a loss, their fate will be decided when the two sides square off against each other on Monday 20 September at Vilnius.

Bruno GARCIA, Coach
In order to compete against a strong team like Spain, we knew that we must showcase our best performance throughout the entire 40 minutes. Although we were able to do that during the first period, we saw plenty of room for improvements in the second period. We made crucial errors that led to us conceding the second and third goals, and knowing how critical our opponent was, we just couldn’t afford to make those mistakes. While this match gave us a painful learning experience, we also gained materials that we could work on to improve our game. We must make the most of this experience and move on. Everyone is looking to see the type of dedication, effort, and persistency this team shows. Those are the qualities this team must bring to the matches, and I believe that it is our obligation as the Japan National Team to showcase a performance that brings pride to the Japanese people. It is something we must keep in mind regardless of the outcome of the match. The match against Spain is in the past, and we have the match against Paraguay ahead of us. This match against Paraguay will be the key to achieve our goal of advancing through the group stage, and I am convinced that we can achieve our goal. We have the momentum and strengths to do so. We will win our next match to clinch the knockout stage, so please root for us.

FP #10 HENMI Katsutoshi Rafael (SL Benfica/Portugal)
We were able to showcase a good match today, as we managed to work hard from the start, but it is unfortunate that the result didn’t follow. Although we were able to create many good opportunities, our opponent was more critical in those situations while also taking advantage of our mistakes. It reminded us that a simple mistake can jeopardise the game at this level. It felt great scoring the go-ahead goal against Spain in the first half, but I wish we could have won the match.

FP #11 HOSHI Shota (Nagoya Oceans)
Despite having the lead at one point, we allowed our opponent to come back from behind, and it showed our lack of experience. We needed to be more committed to winning the match and execute the small things without making mistakes. My goal came from a counterattack, and I feel like I was able to showcase my strong point in that play. It would have been better if we won the match, so I will continue to work hard and try to create opportunities that would help the team win the next match. 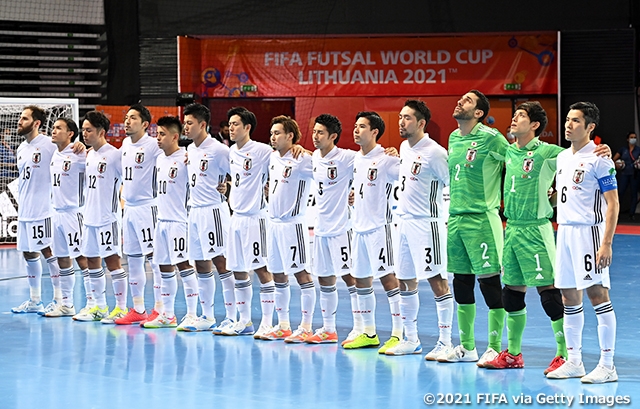