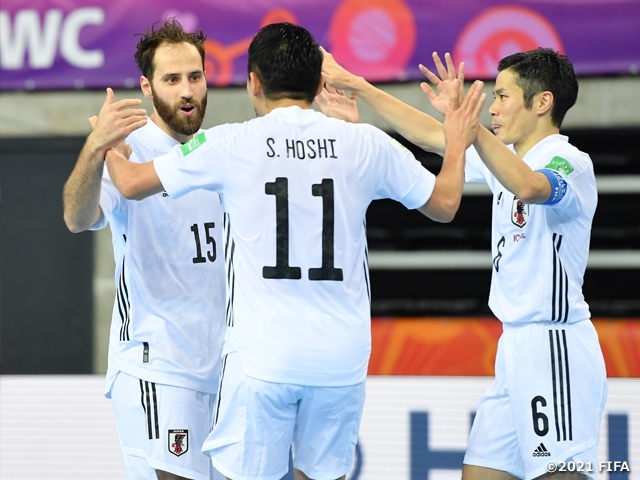 On Tuesday 14 September, the Japan Futsal National Team played their first match of the FIFA Futsal World Cup Lithuania 2021™, where they won 8-4 against Angola.

The match started with Japan taking the initiative, as Henmi struck the first shot of the match. The Japanese players applied aggressive pressure from the front line and focused on finishing their attacks with a shot. Coach Garcia analysed their opponent as a team that thrives in open spaces and consists of players with great individual skills. Facing such opponent, Japan took a collective approach to keep the ball moving, whiling mixing in variety of set-plays to keep the opponents on their toes. 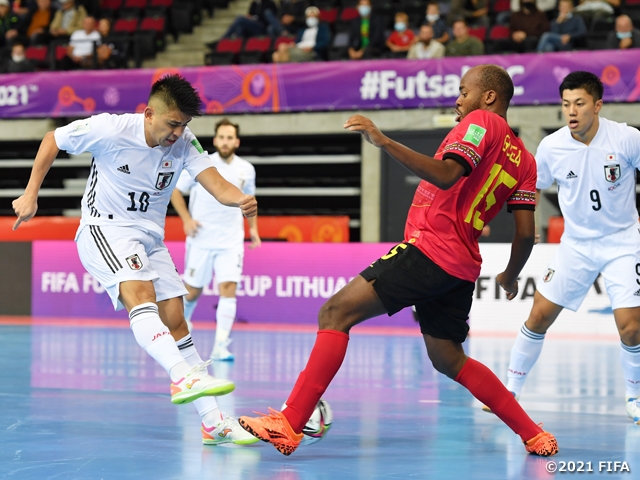 Although Japan struggled to capitalise on their early opportunities, they managed to score the opening goal in the 13th minute, when Oliveira received a pass from Henmi and struck a right footed shot that went through the legs of an Angolan player and pierced the corner of the goal. Just a minute later, MUROTA Yuki converted the deflection of a shot taken by HOSHI Shota to double the lead for Japan. With momentum on their side, Japan continued to create chances, as NISHITANI Ryosuke and MORI Gensuke actively took shots to keep the opposing goalkeeper busy. However, with time running out in the first half, Angola gradually picked up their pace and managed to take advantage of a mistake made by Japan to score back a goal in the 19th minute. Just as everyone thought that the match was entering halftime, Oliveira was fouled with zero seconds left on the clock. After the play was reviewed by video support (VS) service, which is being implemented for this World Cup, Japan was given a FK with one second remaining, which was superbly converted by Oliveira, giving Japan a 3-1 lead at the break. 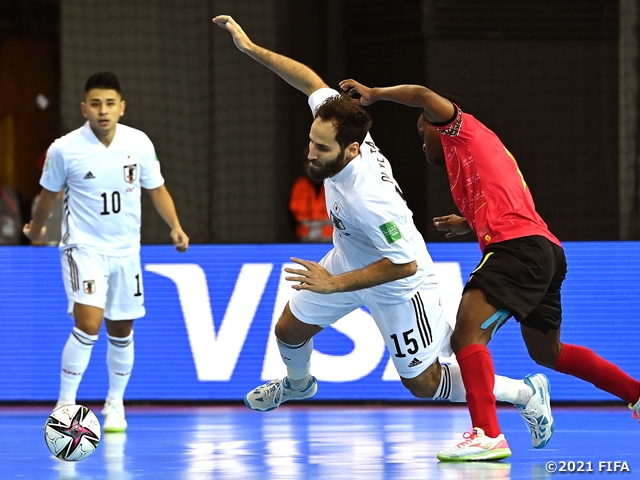 Despite dominating Angola 41 to 17 in the number of shots taken in the first half, Japan conceded a goal to Angola in just 21 seconds into the second half. Japan quickly responded with another goal scored by Oliveira in the 23rd minute, as the Brazilian born striker completed his hat-trick, which triggered a goal spree from the two sides. Angola scored their third goal in the 24th minute with an own goal, which was followed by a goal scored by HOSHI Ryuta with the assist coming from his brother HOSHI Shota. After both sides exchanged a goal apiece, Japan held a 6-4 lead at the half-hour mark. 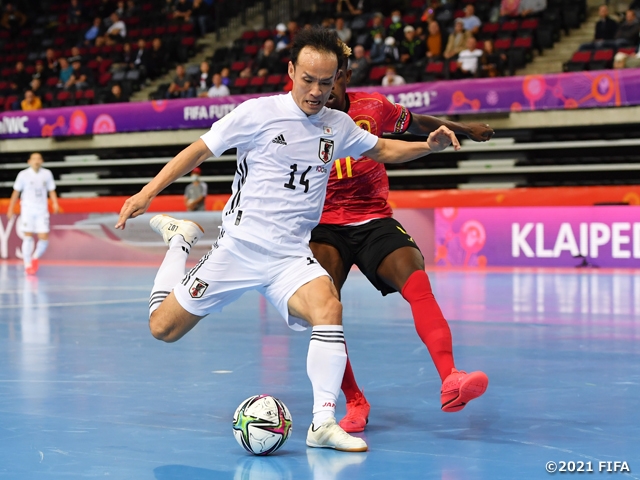 Trailing by two goals, Angola deployed their powerplay in the final five minutes of the match, but the Japanese players showcased great composure to defend against them. Conversely, Japan forced a turnover in the 37th minute, allowing Oliveira to score his fourth goal of the match. With Hoshi Shota adding another goal to their tally with three seconds remaining, Japan walked away with an 8-4 victory to start the World Cup. 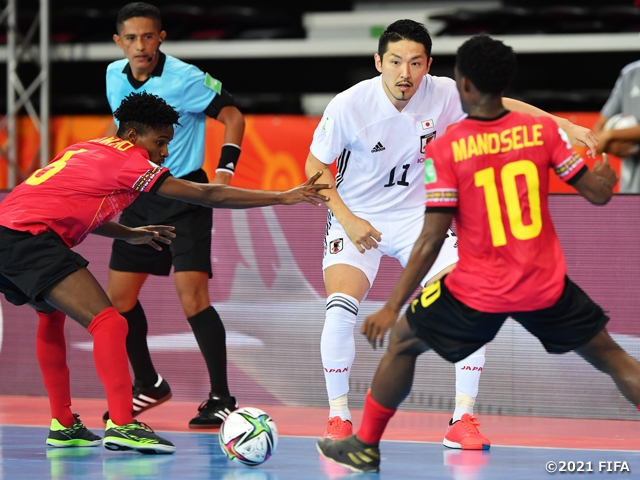 Mr. KONISHI Teppei
Since this tenure under coach Bruno Garcia has started in October 2016, we have strengthened this team to become the centre of attention at the World Cup. After failing to qualify for the FIFA Futsal World Cup Colombia 2016™, we have worked to regain our position in Asia, as we finished third in the 2017 Asian Indoor and Martial Arts Games and second in the 2018 AFC Futsal Championship. Despite falling short from winning the title, we feel that we were able to make our return to where we belong. After making our return to the top tier in Asia, our next goal was set to renew our highest finish at the World Cup and become the centre of attention at the tournament. So we are glad that we were able to win our first match. I know how much the players and staffs worked for this victory, so I am very happy for them. The support of many of our colleagues who are passionate about futsal have also helped us to win today. I think the significance of this victory will become clearer after the end of this World Cup. We will find out how futsal can contribute to the Japanese football world and at the same time, raise the value of the sport. If Japan can become the centre of attention at this tournament, the results will become even bigger and clearer. We will do our best to prepare for our next match against Spain, so please continue to support us.

Bruno GARCIA, Coach
The fact that we were able to start the World Cup with a victory for the first time makes this match that much significant. 12 of the 14 registered players on today’s roster were playing in their first World Cup, and many of our staffs were also entering their first World Cup. From that point of view, I think it was a very important victory for us. In terms of the group competition, both Spain and Japan have won by four goals, but Japan is currently in the lead with the advantage in total goals scored. Despite having very little information on Angola, we analysed their most recent match and prepared ourselves through our training match against Morocco here in Lithuania. Because this group of players lack the experience playing in the World Cup, we made inexcusable mistakes in front of our goal that led to us conceding goals. However, instead of dwelling on our mistakes, I think it is important that we address those mistakes and make the necessary adjustments ahead of our next match.

FP #7 MUROTA Yuki (Espolada Hokkaido)
Our priority was to win the match, so we are satisfied in that sense. Personally, I lost my composure during the second half which caused me to make mistakes, so that is something I need to reflect on. As a team, we were able to aggressively attack the ball and run through the entire match. We focused on each transition, threw out our bodies to defend our goal, and made efforts to win each deflection. Each of these plays have contributed and allowed us to score eight goals and ultimately win the match. On the other hand, we started to play passively after conceding the fourth and fifth foul, so we must be able to control our fouls to avoid those situations.

FP #8 KATO Minami (Shriker Osaka)
With this being my first World Cup, I was thinking “I am finally here” until the game kicked-off. Since we started preparing ahead of the World Cup, we held our trainings in Japan, Spain, and Portugal. There were times when I felt the World Cup was so far away, but I started to brace myself as we approached this day. I made my debut with the national team in 2016. I remember being overwhelmed when I first heard the national anthem on the pitch, but it was nothing compared to what I felt today. We are not totally satisfied with our performance as a team, but there were definitely many aspects that went well. Now that the team is off to a good start, I hope to get myself involved in the team’s goals.

FP #14 NISHITANI Ryosuke (Nagoya Oceans)
The fact that we were able to score eight goals in our first match is a great achievement. Although we saw plenty of room for improvements, we should celebrate this victory as a team, while I celebrate my first goal at the World Cup. I was overwhelmed when I heard the national anthem before the match, especially after we failed to qualify for the World Cup in 2016. Because of that bitter experience, this past five years felt so long and made me think about many things. The team looked unsatisfied after the match, but as our coach mentioned, we should celebrate this victory for now. This match reminded us of the importance of a single goal, so we will use this experience to improve ourselves ahead of our next match. 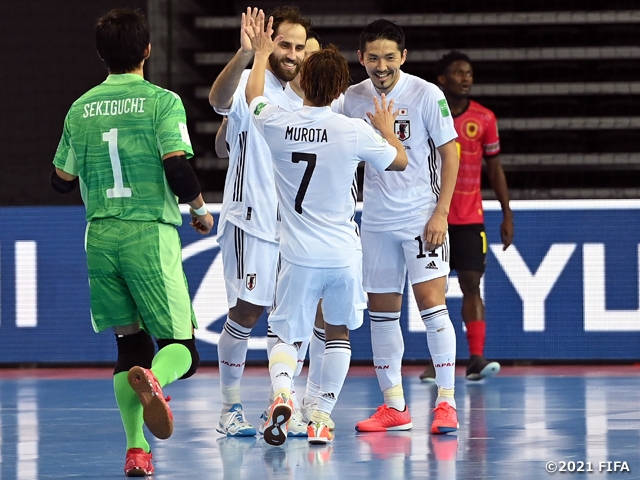