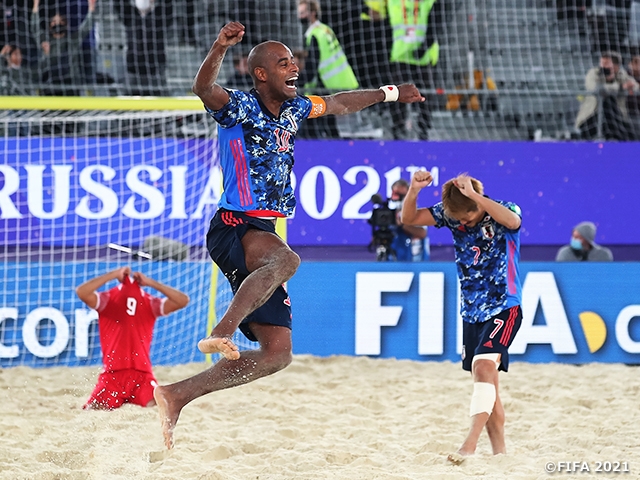 The match started with Japan taking the initiative against Tahiti, who entered the match with just 10 players, two fewer than their original registered squad, due to injuries and positive results of COVID-19.

Japan scored the opening goal in the fourth minute, when the cross delivered by UESATO Takumi induced an own goal. A minute later, YAMAUCHI Shusei earned a PK, in which he converted himself to double the Japanese lead. 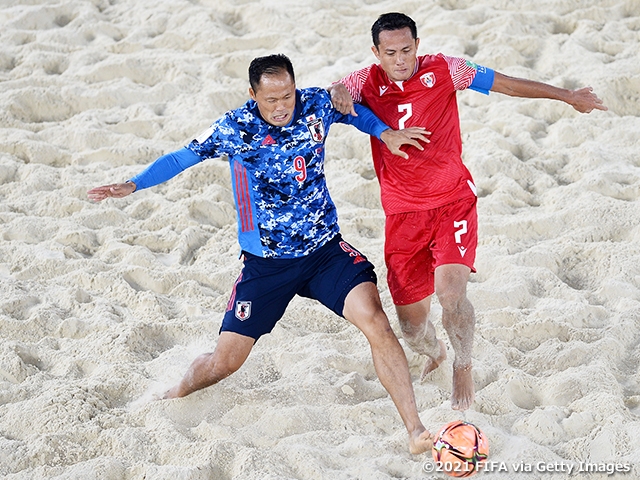 With a two goal lead, Japan displayed great composure to keep the ball moving in the second period, but the match started to intensify as Tahiti picked up their pace in offence. Tahiti earned a PK in the 20th minute, when their shot deflected off the hand of Yamauchi, as they successfully converted the spot kick to cut down their deficit in half.

Tahiti created opportunities by having their goalkeeper carry the ball upfront and take shots from distance with their field players blocking the view of the Japanese goalkeeper KAWAI Yusuke.

Although Japan was able to keep their one goal lead intact for the remainder of the second period, they conceded the equaliser in sixth minute of the third period, which allowed Tahiti to gain momentum and score the go-ahead goal in the 36th minute.

With just 23 seconds left on the clock, Japan made their final attempt to keep their tournament run alive, as MOREIRA Ozu delivered the ball to the right side to set up a volley shot for OBA Takaaki. The shot taken by Oba took a bounce in front of the opposing goalkeeper before finding the back of the net, equalising the score for Japan just before the final whistle.

Japan took the lead in the first minute of extra time when OKUYAMA Masanori redirected the header of AKAGUMA Takuya, but Tahiti responded with a spectacular volley shot to equalise just 30 seconds later.

The decisive moment came in the 38th minute, when Oba delivered a cross from the right side, allowing Akaguma to lift the ball in the air to strike a bicycle shot. The shot taken by Akaguma struck the post before bouncing into the net, giving Japan the lead once again. 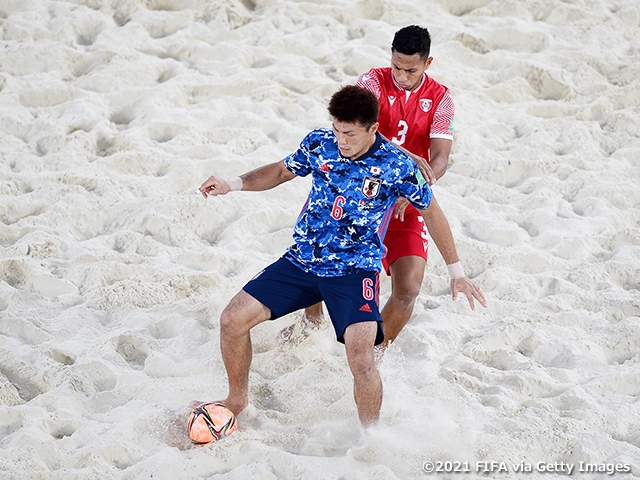 Tahiti made their final efforts to level to match, but led by the tenacious efforts showcased by Kawai, Japan managed to hold onto their lead, clinching their second straight semi-finals at the World Cup.

The semi-finals will take place on Saturday 28 August, where the Japan Beach Soccer National Team will now face Senegal, who defeated Brazil at the quarterfinals. Following the match, player-coach Moreira shared his aspiration by shouting, “We are going to win a medal!”

FP #11 OKUYAMA Masanori (Loewe Yokohama)
Although we were able to enter the match with great intensity, we made the match difficult on ourselves by playing passively after Tahiti started to gain momentum in the second and third period. However, we managed to showcase our resilience to win the match in a dramatic fashion. It really helped that we entered the match fully motivated to make history by reaching the semi-finals in two consecutive World Cups. We have overcome tough matches to build great momentum ahead of the next match. We are a bit fatigued, but from here on, who ever shows more desire to win the match will advance to the final, so we hope to prepare ourselves to win the mental battle. We experienced playing in the semi-finals last time, and our staffs have done a great job preparing the environment for us, so we have no issues regarding our condition. I have the impression that Senegal is a team with great athleticism, but I feel that we can create opportunities by taking advantage of our agility. I believe that we can win the match as long as we can showcase a tenacious effort in defence.

FP #6 AKAGUMA Takuya (Lazo Apego Kitakyusyu)
I knew Oba was going to pass the ball to me, so I really focused on setting up the bicycle kick properly. I saw many of my bicycle shots getting blocked during the match, so I changed where I contact the ball, which allowed me to navigate the ball to the side net. Although I struggled to convert the early opportunities, I continued to take shots and I am glad I was able to make the decision to take that last shot. I have the impression that Senegal consists of players with great athleticism and capable of taking advantage of their physiques to score goals, so we will do our best to win the physical battles. We are aware that many people are rooting for us from Japan. Thinking of our fans, teammates, and players who couldn’t make it here, we cannot be whining that we are tired. Another win will allow us to surpass our result at the previous World Cup. I believe that we can achieve our goal as long as we work together as a team and give our best effort until the very end.

FP #7 OBA Takaaki (Loewe Yokohama)
Despite conceding the lead, I had a strange feeling that we were not going to lose today. (Reflecting on the late equaliser he scored in the third period) I knew the ball was coming to me as soon as I made eye contact with Ozu. When the ball actually arrived, I was full of confidence that I was going to score, and when it went in, I knew that we were going to win the match. I was fully committed to help the team from start to end, and I am glad that I was able to contribute to the team’s victory. I am grateful to all the people who has supported us, as we would never make it this far without their support. We celebrated our victory after the match, but we are now fully focused on our next match against Senegal. We are here to make history. We will try to keep our cool and compete with strong determination. I believe that the team with a stronger will power is going to win the match, so we must try to recoup and build on our mentality, while recovering our bodies. We will continue to stay on the same page as a team and showcases our style of beach soccer on the pitch.