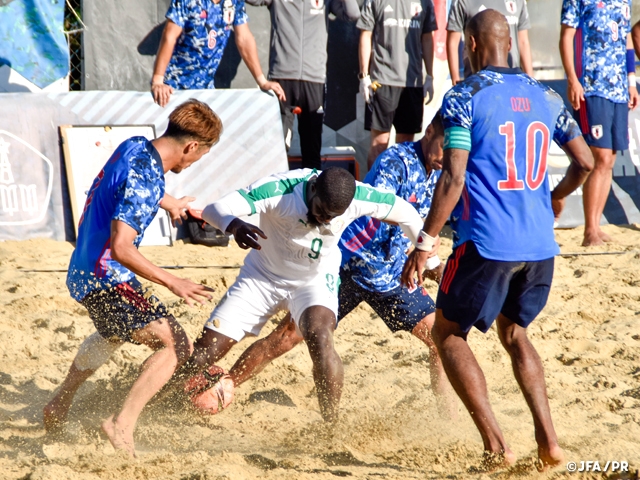 Due to the affect of the corona-pandemic, the Japan Beach Soccer National Team were limited to holding international activities, as they trained domestically to prepare for the FIFA Beach Soccer World Cup. With the team holding their preparation camp in Russia, they played three training matches within four days to polish up their game intuition.

On Tuesday 10 August, the team faced their AFC rival Oman Beach Soccer National Team. Entering their first training match in nearly two years, Japan struggled to find their rhythm in the early minutes, as they conceded the opening goal to start the match. Despite equalising with the goals of AKAGUMA Takuya and MOREIRA Ozu, Japan lost the match 2-3 after conceding the decisive goal with just 10 seconds remaining on the clock.


On Thursday 12 August, the team squared off against the CONCACAF representative El Salvador Beach Soccer National Team. Following the opener scored by Akaguma, YAMAUCHI Shusei, who is entering his ninth World Cup, scored a bicycle shot to make it 2-0. Despite conceding the equaliser at the end of the first period and the lead in the second period, the team walked away with a 6-5 victory with OBA Takaaki scoring the game winner at the end of the third period.

Following the match, coach Moreira commented, “It’s great that we were able to win, but we still have plenty of room for improvements. We must not sit on our laurels and prepare for our next match.”

The final match to conclude the three game series was against the CAF champions Senegal Beach Soccer National Team on Friday 13 August. Consisting of players with great athleticism who are capable of taking shots from any angle, the African side got off to an early two goal lead in the first period. Led by the goal scored by Akaguma at the beginning of the second period, Japan managed to get within a goal before entering the final period.

With Moreira and OBA Takaaki scoring a goal apiece in the third period, Japan managed to level the score at 4-4, sending the match into overtime. After the two sides exchanged a goal apiece in overtime, the winner was determined by a penalty shootout, in which Senegal prevailed with a score of 2-4.

As a result, Japan finished the three game series with a record of one win and two losses. Through these matches, players were able to implement their trainings to real match situations while also gaining match experiences against foreign players to hone their game intuition ahead of the World Cup.

The Japan Beach Soccer National Team will take an off-day on Saturday 14 before entering the official tournament period of the FIFA Beach Soccer World Cup Russia 2021™ on Sunday 15. 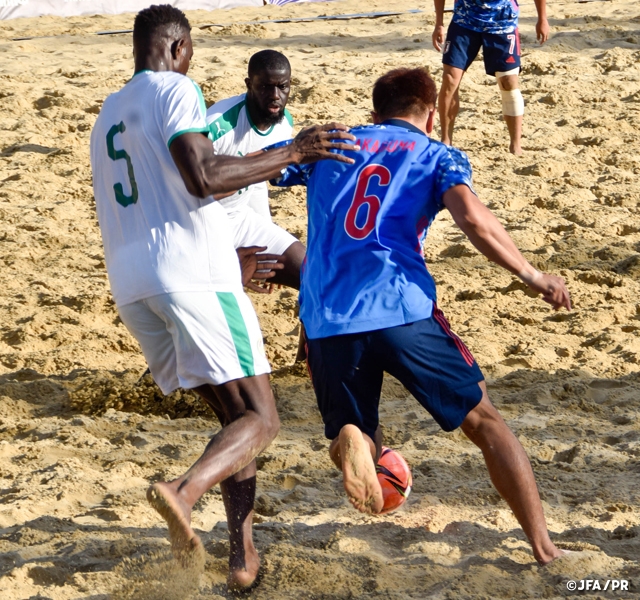 GK #12 GINOZA Tomoya (Sol Mar Praia Okinawa)
This is our first tour held overseas in two years, so I have been extremely excited from day one. We went through all the tactics we covered in our domestic training camps before entering the matches. With this being our first match against foreign teams in two years, we struggled to adjust to the pitch condition and the opponents’ unique rhythm, but we also managed to do well in some respects, such as set-pieces, so we are satisfied with our overall performance. However, as coach Moreira pointed out, we didn’t play with enough intensity. Which reminded us that we need to play with the pride and awareness of being a member of the Japan National Team and prepare ourselves to showcase a persistent effort on the pitch. We have a wide range of players, from veterans to players making their first World Cup. Working with coach Moreira and coach TABATA Teruki, we will use the remaining time to correct the issues that occurred in these training matches before entering the World Cup. We thank you for your continued support for us.

FP #5 HARAGUCHI Shotaro (Tokyo Verdy BS)
First of all, I would like to thank JFA and all the people who were involved to give us the opportunity to take part in this World Cup. Thank you very much. We were also given the opportunity to play our first international matches in nearly two years, which allowed us to polish our game intuition ahead of the World Cup. The team is now in great condition, and I am in my top form as well. My participation with the national team is supported by many people, including my team, company, sponsors, and family, so I hope to showcase a performance that can give back to them.

FP #11 OKUYAMA Masanori (Loewe Yokohama)
Our first series of matches against foreign teams in nearly two years ended with a bitter result of one win and two losses. However, we were able to find out what we need to fix as a team and as individuals, get a feel of the physical battles against foreign players, and managed to implement some of the things we worked in our previous training camps. The matches also allowed us to reconfirm the importance of having the pride and commitment to represent our country. The result of the World Cup will have a significant impact on the development of beach soccer in Japan, so we will give our utmost effort to prepare ourselves within the remaining time. We are hearing news of disasters occurring in Japan. I sincerely hope for the safety of everyone. 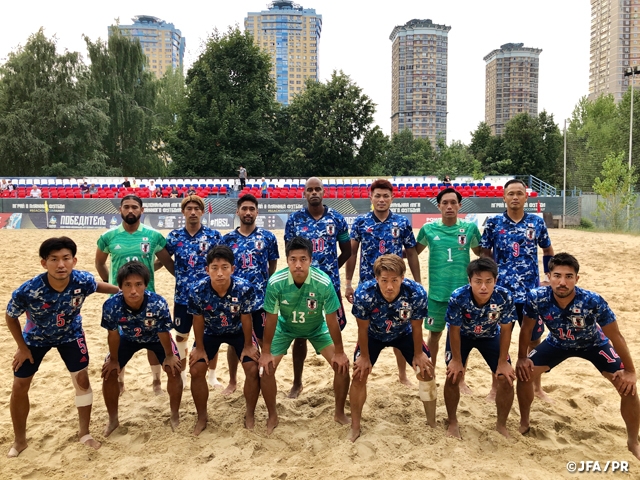