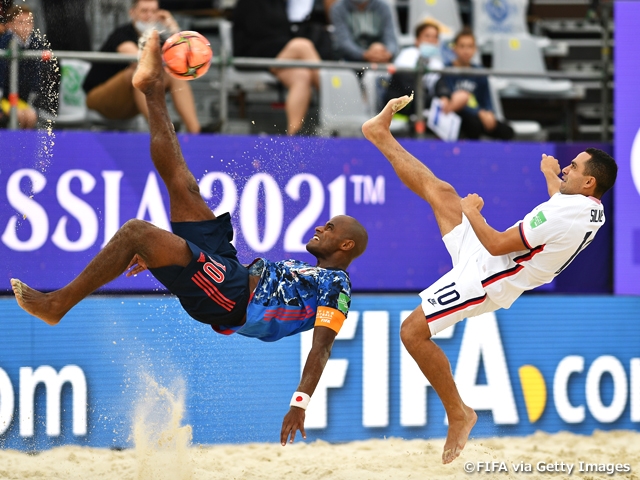 Japan started off the match by showing great intensity but conceded the opening goal to USA when a bicycle shot taken from distance sailed over the head of the Japanese goalkeeper KAWAI Yusuke in the fourth minute.

However, the Japanese side equalised just a minute later, when OKUYAMA Masanori capitalised on the opponent’s error and struck a shot in between the goalkeeper’s legs to level the score 1-1.

Although the second period saw the American side pick up their pace to create opportunities to threaten the Japanese goal, Kawai made numbers of spectacular saves to keep the score intact. In the 24th minute, UESATO Takumi intercepted the pass of the opposing goalkeeper to initiate a counterattack, setting up a shot for MOREIRA Ozu, who struck a powerful shot with his right foot to give Japan the lead. 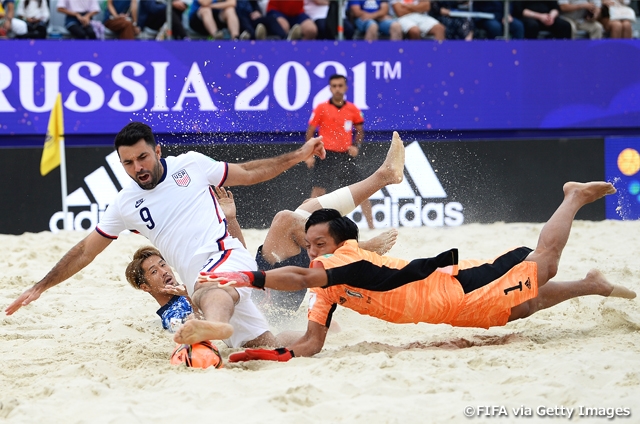 With momentum on their side, Japan took the initiative in the third period, as OBA Takaaki earned a PK in the 29th minute, in which he converted himself to extend the Japanese lead. Oba celebrated his goal by raising the jersey of MATSUDA Kosuke, who left the team due to an injury he sustained before the tournament.

The two sides showcased an intense battle in the closing minutes. After USA converted a chance created from a corner kick in the 30th minute, Japan responded with the goal of YAMAUCHI Shusei in the 32nd minute to maintain their two goal lead. 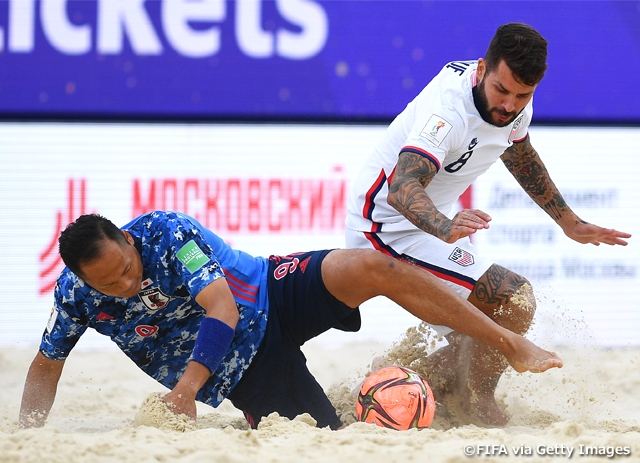 USA rallied in the closing minutes, as they scored their third goal in the 35th minute to cut down their deficit in half, but the Japanese players kept their composure to close out the match, walking away with a 4-3 victory. As a result, Japan has clinched their spot into the knockout round.

Japan will now play their third group stage match against Russia on Tuesday 24 August, where they will seek to clinch the top spot of Group A. Following their match against USA, player-coach Moreira shared his aspiration ahead of their next match, “We want to advance through as the group leader, so we will rest up and try to enter our next match against Russai in good condition.”

FP #5 HARAGUCHI Shotaro (Tokyo Verdy BS)
The team really united following our come from behind victory against Paraguay, and we were able to enter this match against USA with a strong determination to win. (Reflecting on the goal of Okuyama) The ball came right towards me, so I fought for the ball believing that Okuyama will convert the chance. It’s been 12 years since I started playing beach soccer and this is my third World Cup. I am in a very calm mental state and in great physical condition. The team is getting used to the atmosphere of the match venue and receiving energy from many Japanese people who reside in Russia. We will approach our next match against Russia the same way we approached the past two matches. I haven’t scored any goals yet, so I will give my best efforts to score a goal that cane help the team win the match.

FP #11 OKUYAMA Masanori (Loewe Yokohama)
USA was a tough opponent who can make quick transitions between offence and defence. (Reflecting on his goal) The ball came at the perfect timing, so I tried taking a shot before the goalkeeper was ready. The team’s victory is the number one priority, but I am glad I was able to fulfil my duty as a pivot by scoring a goal. We will now face Russia, who we lost in the third place match at the previous World Cup. We must also factor in that they will be entering the match with extra motivation as the host nation. We will do our best to advance through to the knockout stage as the group leader while also getting our payback. I haven’t been able to strike a good bicycle shot in the past two matches, so I hope to find my rhythm and score with a bicycle shot against Russia.