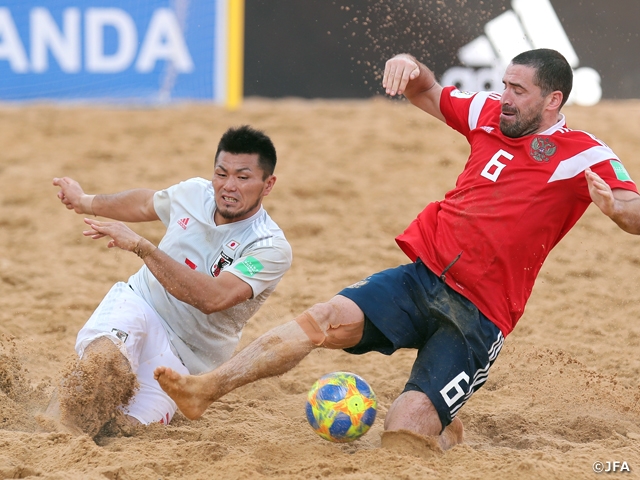 The opening goal was scored by Japan in the fourth minute, when MOREIRA Ozu chased down a loose ball, shielded off an opponent to possess the ball, and assisted the goal of AKAGUMA Takuya. Russia responded by scoring back to back goals in the eighth minute to take the lead, but Akaguma scored the equaliser in the very next play, as he struck a header off a lobbing pass delivered by OBA Takaaki. In the final minute of the first period, Moreira struck a powerful shot off a free kick to give Japan a 3-2 lead at the end of the period.

Japan scored their fourth goal at the beginning of the second period, when OBA Takaaki connected with a pass delivered by OKUYAMA Masanori in the 23rd minute. However, Russia scored back a goal in the next play, when Fedor ZEMSKOV struck a fantastic bicycle kick that pierced the near side of the Japanese goal. 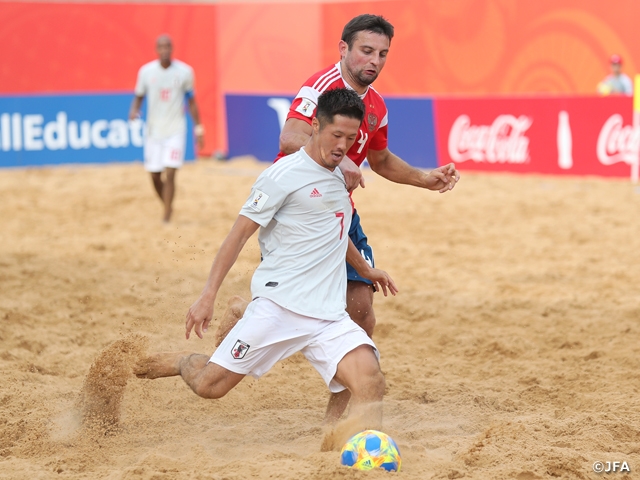 The match entered the third period with Japan leading by a single goal, but Russia’s Alexey MAKAROV captured the equaliser in the 26th minute, when he showcased a great individual effort to break down the Japanese defence. With momentum on their side, Russia went onto score the go ahead goal in the 29th minute, when Zemskov capitalised on the fumbled ball of Japanese goalkeeper TERUKINA Shingo. This goal turned out to be the decisive goal, as Russia won the match 5-4. As a result, Japan finished in fourth place, matching their highest finish since the inaugural World Cup in 2005.

The tournament final took place following the third place match, where Portugal won over Italy 6-4 to claim the title. Japan’s Moreira Ozu was named as the tournament MVP. 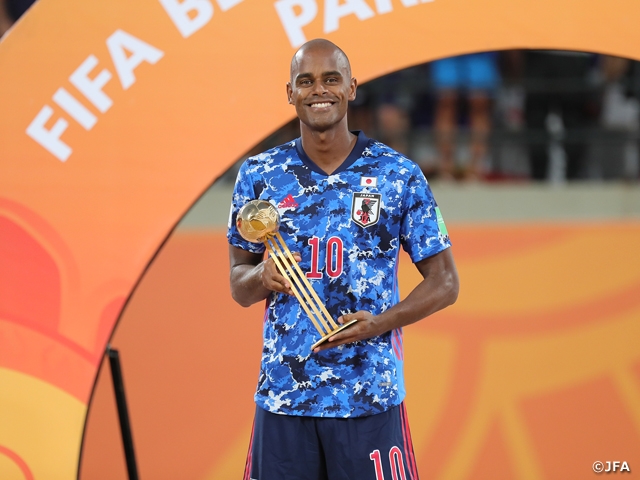 RAMOS Ruy, Coach
This match made us realise that the we still have long ways to go to reach the top of the world. However, our players played very well. After gaining a two goal lead, our mentality turned defensive and led us to lose control of the match. Our inability to close out a winning game is a huge issue for us. In order to reach the world pinnacle, we must improve the environment surrounding beach soccer and gain more match experience against top tier teams of the world.

FP #5 TABATA Teruki (Veertien Mie BS)
This is not the result we desired. I cannot think of anything right now. I’m just so disappointed. After playing for nearly 13 years as a member of the Japan National Team, this was be our best finish at the World Cup, but our goal was to win the title, so I wanted to at least take back the third place medal. From today’s match, it was evident that we couldn’t control the game when we had the lead, and that is a major issue we need to address.

FP #9 YAMAUCHI Shusei (Tokyo Verdy BS)
This match made us realise the difficulty of facing top tier teams of the world. Russia deserved to win this match, as they were the better team in all aspects. Coach Ramos has stressed the importance of the fighting mentality, but also respects individuality, and that is a huge part of our playing style.

FP #10 MOREIRA Ozu (Tokyo Verdy BS)
In today’s match against Russia, I was placed in a more attacking role as part of our team tactic. The team has gotten so much stronger since I first arrived in Japan. The team is now competing for the world title and that is why we are not satisfied with this fourth place finish. Compared to men’s football and futsal, Japan is closest to win the world title in beach soccer. How we proceed from here is what’s important for us.