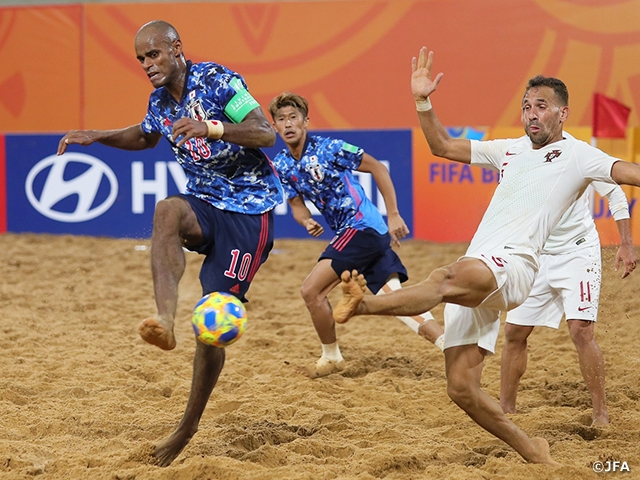 The match saw Portugal take the initiative, as the Martins twins combined with each other to score the opening goal. The goal came in the third minute, when Be MARTINS delivered a grounder towards the Japanese goal. Despite the reaching effort made by MOREIRA Ozu, Leo MARTINS connected with this pass and slotted the ball into the goal to give Portugal an early lead. However, Japan managed to level the match within the first period, as Moreira converted a free kick in the 11th minute to give Japan a positive momentum into the second period.

At the beginning of the second period, YAMAUCHI Shusei responded to a lobbing pass from TERUKINA Shingo. After shielding off a Portuguese player, Yamauchi ran towards the goal and struck a left footed shot that gave Japan the go-ahead goal.

After entering the third period with a 2-1 lead, Japan conceded back to back goals to Be Martins in the 29th and 31st minute. With time running out, Japan had their backs against the wall. However, with 47 seconds left on the clock, AKAGUMA Takuya struck a powerful shot from a corner kick to give Japan the equaliser, sending the match into overtime. 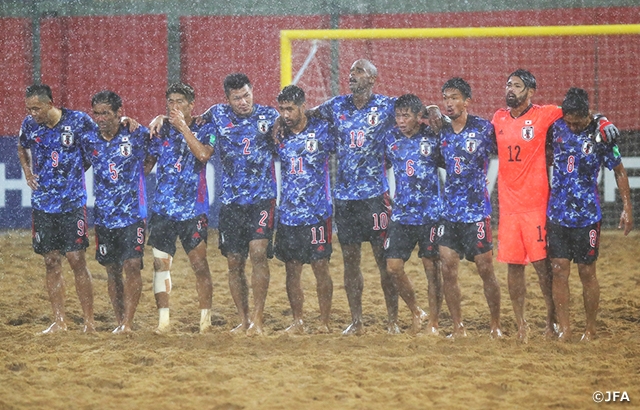 With both teams showing persistent efforts to deny each other’s opportunities, the match entered penalty shoot outs with a score of 3-3. After Japan’s first kicker Moreira missed the target, their third kicker TABATA Teruki’s shot also sailed over the cross bar to give Portugal the ticket to the final.

RAMOS Ruy, Coach
This is a difficult result to swallow, but the players played gracefully. I wanted to give the “Beach Samurais” the opportunity to play at the final. Ozu (Moreira) missed the penalty. The player who worked the hardest tends to miss their shots in penalty shootouts. Just like ZICO (former member of the Brazil National Team) and BAGGIO (former member of the Italy National Team) did. We just need to reset our minds and win the third place match against Russia. We want to leave this tournament on a high note.

FP #10 MOREIRA Ozu (Tokyo Verdy BS)
After we trailed 2-3, we kept telling each other that we still have time and to believe each other. When Akaguma scored the equaliser, it gave us great hope that we can win the match… I was very confident about taking the penalty kick. However, I ended up missing the most important penalty kick of my life, and I still can’t believe it. Crying over it does not change anything, so I will give my best to win the third place medal back to Japan.

FP #8 KOMAKI Masayuki (Veertien Mie BS)
We conceded the second goal from a one on one situation where I was in the defensive end. We entered the match with a strong intention to win the match, so this is a very disappointing loss. We must reset our minds and win the match against Russia before making our ways back to Japan.

FP #9 YAMAUCHI Shusei (Tokyo Verdy BS)
I knew I will have my chance to score at the semi-finals, so I was anticipating for that scene. However, there were plenty of other scenes where I could have scored goals, so I feel responsible for this loss. I will do my best to score goals at the third place match as well. 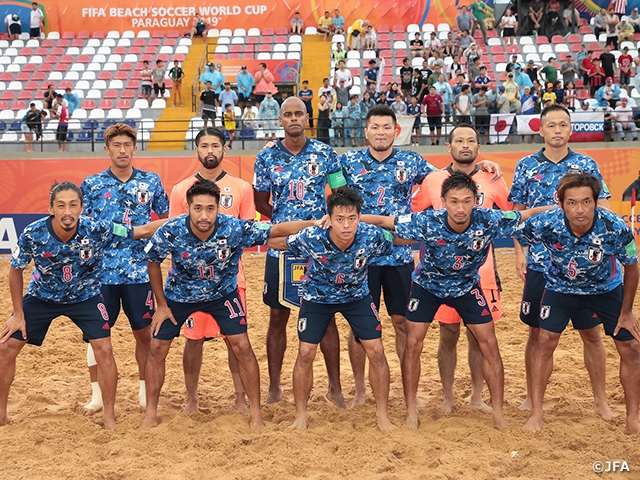