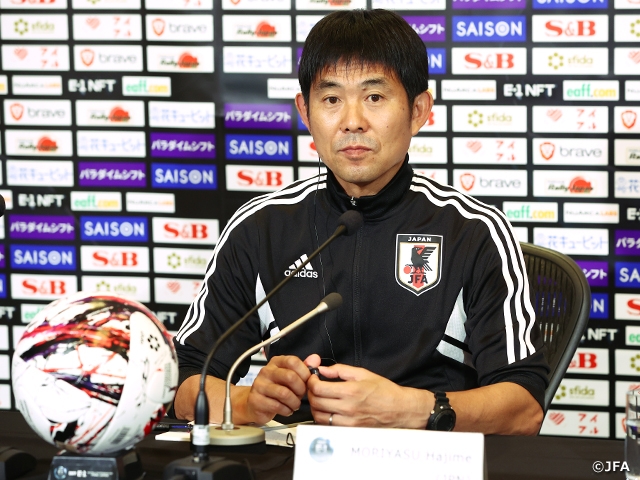 On Monday 18 July, the SAMURAI BLUE (Japan National Team) held their official training session ahead of their match against the Hong Kong National Team in the EAFF E-1 Football Championship 2022 Final Japan. At the official press conference held on the same day, Head Coach MORIYASU Hajime shared his aspirations for the tournament, “We will give our best efforts to win the title while improving the overall level of the team.”

Following their first match against Hong Kong, Japan will play China PR (24 July @Toyota) and Korea Republic (27 July @Toyota) in this single round-robin competition among four East Asian countries, where they will be aiming to claim the title for the first time since 2013.

At the same time, the tournament will provide a valuable opportunity for the players to make their case to be included in the squad for the FIFA World Cup Qatar 2022™, which will take place in November.

"I want to use as many players as possible in these three matches. I want to see the ability of each player as we move towards the World Cup," said coach Moriyasu, indicating his intention to strengthen the squad while searching for new talents ahead of the World Cup in Qatar in four months' time.

With 10 players selected for the first time, and many players making their return for the first time in a while, including MIYAICHI Ryo (Yokohama F. Marinos), who returns to the national team for the first time since 2012, it is important that the team uses the limited time to prepare for the tournament so that they can function as a team. 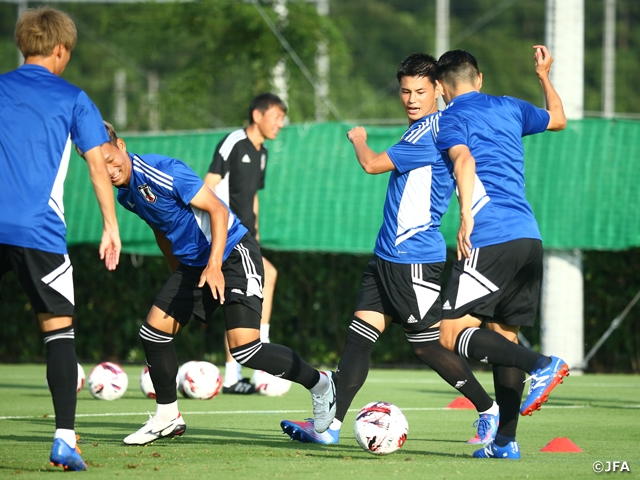 Having experienced the tournament in 2015 and 2017, TANIGUCHI Shogo (Kawasaki Frontale), who has been appointed captain, said, "We don't have time to make adjustments, but we are determined to win all three matches to claim the title. We need to work together to bring out the best in each other."

SOMA Yuki (Nagoya Grampus), who also competed in the 2019 tournament, noted that “We can improve the team through our daily communication and in-game coaching to ensure that everybody is on the same page.” The winger also added that, “We need to be able to create chances at the individual level. The team’s victory will depend on how well each individual can perform.”

25 players gathered for the training session held in the evening. Although MITSUTA Makoto (Sanfrecce Hiroshima) was absent due to an injury he sustained in a league match on the day before, five other players from Hiroshima, including SASAKI Sho and MORISHIMA Tsukasa, as well as IWASAKI Yuto (Sagan Tosu), who was selected for the first time as an additional call-up, took part in the training session to work up a sweat.

The session was open to the media for the first 15 minutes, where the players were seen going through their warmup routine, as well as ball possession drills, while the three goalkeepers went through their own routine. 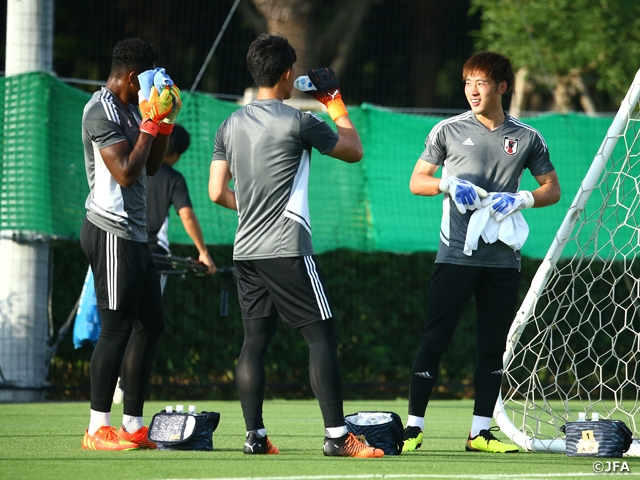 Hong Kong have participated in three previous editions of the tournament – 2003, 2010 (East Asian Football Championship), and 2019 (EAFF E-1 Football Championship) - but have lost all three matches and finished last out of four on each occasion. However, under the leadership of Head Coach Jorn ANDERSEN, who has played for the Norway National Team, the team has made significant progress over the past six months, finishing second in the final qualifying round of the AFC Asian Cup in June, where they won two matches and lost one, against Afghanistan, Cambodia, and India, and have now qualified for the AFC Asian Cup. The team features seven players from Kitchee SC, who finished in the top 16 in this season's AFC Champions League, as coach Andersen commented, "We will be facing strong opponents, but we hope to get something out of this competition."

MORIYASU Hajime, Head Coach of SAMURAI BLUE (Japan National Team)
We will be competing in the EAFF E-1 Football Championship, where four countries compete for the East Asian title, and we will give our best efforts to win the title while improving the overall level of the team. I want to use as many players as possible in these three matches. The squad consists of players who are active in the J.League, and through this competition, we hope to raise the value of our domestic league and the players competing in it. I believe that all players who desire to compete in the World Cup have a chance to make the squad. We will continue to look at the individual abilities of the players at this tournament, and hope to make progress towards the World Cup.