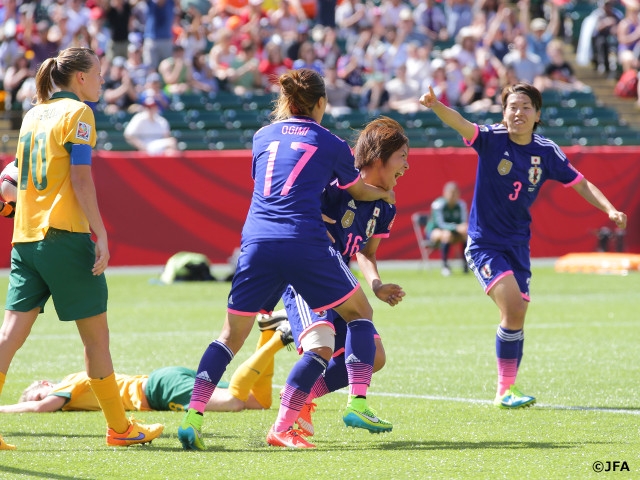 Nadeshiko Japan, in their quest to defend their title at the FIFA World Cup Canada 2015, took on Australia at the quarter-final at Commonwealth Stadium in Edmonton. With the goal by substitute IWABUCHI Mana (FC Bayern Munich) in the 87th minute to give her country 1-0 win, Japan booked their semi-final spot for the two World Cups in a row.

The rematch of the AFC Asian Cup final in May, 2014 against Australia started in the local area’s highest temperature in this season in the past five years. 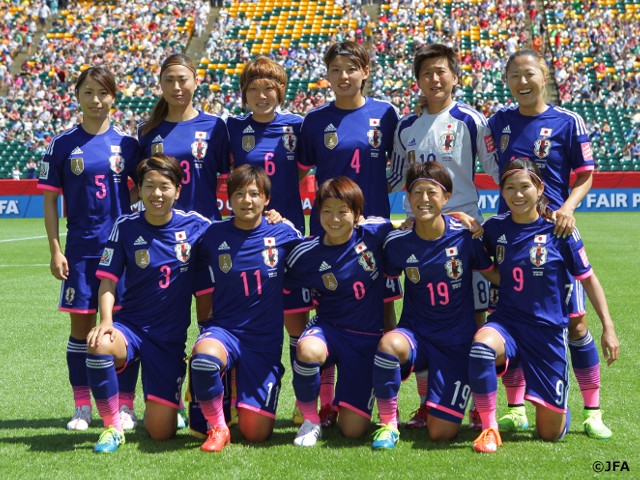 Although Australia defeated Brazil in a momentum-shifting fashion in the first round of the knock-out stage and were fired up for the Japan match, it was fairly dominated by Japan with their impressive stamina and up-tempo passing game.

In the 8th minute, midfielder KAWASUMI Nahomi (INAC Kobe) fed forward OHNO Shinobu (INAC Kobe) up front, who attempted a shot with her right foot. In the 22nd minute, again it was Ohno’s right foot from Kawasumi’s cross, but the shot went off target.

Japan, controlling the course of the match, had another crucial moment in the 33rd minute. The ball was moved from midfielder SAKAGUCHI Mizuho (Nippon TV Beleza) to Ohno to midfielder MIYAMA Aya (Okayama Yunogo Belle). Miyama’s shot was denied by the goalkeeper’s outstanding jumping save.

While Australia kept trying to attack the space behind Japan’s back line, but Japan’s well-coordinated defence did not allow such an opportunity.

There was only one shot taken by Australia in the first half. Kyah Simon moved up and fired from middle range minutes before the end of the first half, but it was stopped by Japan’s goalkeeper KAIHORI Ayumi (INAC Kobe).

Even in the second half, Japan did not stop running and kept the dominance over Australia, who in the 54th minute had Emily Van Egmond connected the ball out of Japan’s mistake to Samantha Kerr in the left flank. But Kerr’s attempt was denied by Kaihori.

On the other hand, Japan in the 59th minute moved the ball from Kawasumi to ARIYOSHI Saori (Nippon TV Beleza) on the right then to Miyama, who rushed up to the near side and tried to deflect it with her heel. The tricky shot, however, wasn’t directed to the goal.

In the 72nd minute, Japan sent Iwabuchi onto the pitch in place of Ohno, to energise the movement up front. Shots were fired by Ariyoshi in the 80th and by forward OGIMI Yuki (Vfl Wolfsburg) in the 85th. Also a corner-kick was awarded to Japan after Iwabuchi’s attempt in the 86th minute.

The lone goal of the match was seen after that corner-kick opportunity. The kick by Miyama was cleared by a defender, but Utsugi sent it to the right. Iwashimizu fired it once and the loose ball out of the goalkeeper’s hands again picked it up by Iwashimizu, who passed it to Iwabuchi on the other side. Iwabuchi quickly reacted and put it to the unguarded goal.

Japan held on to the single-goal lead until the finish and clinched the spot in the semi-final round. Midfielder UTSUGI Rumi (Montpellier HSC) was selected to the Player of the Match.

In the semi-final, Japan will face England on 1 July again in Edmonton. England edged host country Canada 2-1 in Vancouver in the previous match for their first semi-final appearance in their Women’s World Cup history. 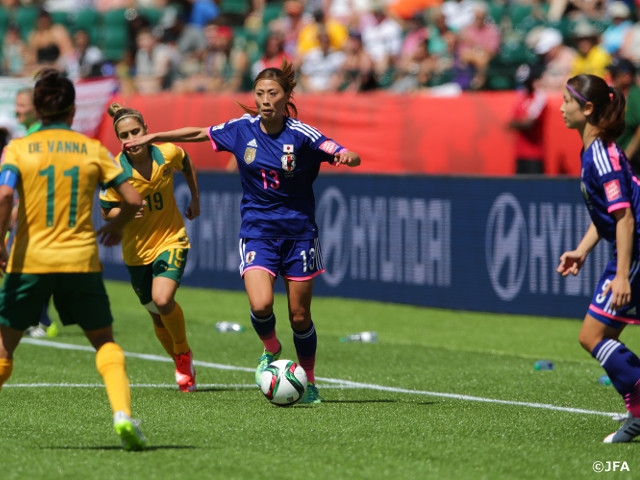 SASAKI Norio, Head Coach (Nadeshiko Japan/Japan Women’s National Team)
It took long for us to score, but our players worked very hard and stuck to our game plan until the end. It’s Nadeshikos’ strength that we never give up winning and keep running under that degree of heat.

Iwabuchi is capable of creating things in front of goal and striking it really hard. I said to her “It’s you to score and finish this thing” when I sent her to the pitch. We have been playing tough matches with only one goal deciding the outcome, but we’ve been playing very tenaciously and every single match gives us extra confidence.

The tempo we play with has been getting better, and there is no question that our overall mental toughness is getting better. We will come out to the next semi-final being confident.

FW #16   IWABUCHI Mana (FC Bayern Munich/Germany)
It was good that I could put it in. It gives me confidence to score a goal in a tournament like this. I am glad that I went over to Germany to step up to the next level. We still have two more matches, but every match is important. So I will be prepared and do my best to leave a good result.

MF #13   UTSUGI Rumi (Montpellier HSC/France)
The way for Australia to start the match was a little different from what we expected, but we didn’t panic and we had our mind-set together to create our rhythm. I think that’s what got us the win. (On the Player of the Match) It’s just the result of everyone on this team doing what she has to do, and the award just fell on my laps. But I am very happy that people recognised what I had been working on overseas.

Alan STAJCIC, Head Coach, Australia National Women’s Team
It’s just the better team won the match. Japan are skilled, patient, and well-composed. We were supposed to defend, but we got tired after the first 20 minutes. And our decision making got bad. Japan’s passing ability and decision making were better than we expected, and their chemistry and skills were really excellent. We couldn’t do what we were supposed to do.