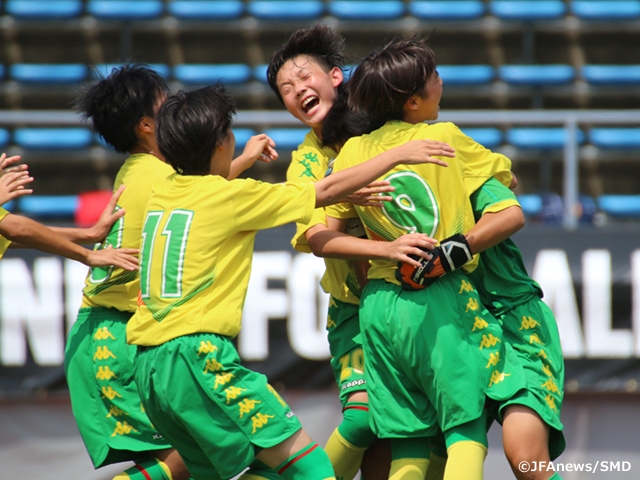 On 28 July saw the semifinals of the 21st All Japan Youth (U-15) Women's Championship.

The first match was a see-saw battle. After 7 years of absence in this championship, JEF UNITED ICHIHARA CHIBA LADIES U-15 tried to attack INAC KOBE LEONESSA U-15 with their aggressive dribbling from the beginning. But they couldn’t break through INAC’s defence which was mainly led by NAKAO Jyunna. Before the end of the 1st half, NAKAO Momo tried to push the ball in front of the goal, but it went just wide of the goal.

JEF continued to take control in the 2nd half, however INAC finally had a chance in the 54th minute; MORI Fumika sneaked into a space to receive a pass and took a shot from right side, but the ball went just in front of the goalkeeper. The 2nd half ended without any goals. In the penalty shoot-out, JEF’s goalkeeper ITO Nanami showed good play. As she reflected on it “I didn’t expect to block this much”, she blocked 3 consecutive shots and contributed to the team’s victory.

ITO Nanami (JEF UNITED ICHIHARA CHIBA LADIES U-15)
After the beginning of this championship, our team’s mood has been good and again we could enjoy the match today. At first it was difficult since we couldn’t move as we wanted, but all of us did our best keeping high motivation to beat the opponents who were very fit until the end. I appreciate my parents’ support and coaching staff’s guidance; this is why I can be here now. I also appreciate my teammates who didn’t play on the pitch; they have supported us a lot, too. We want to keep having this sense of appreciation and keep winning to get the title of this championship.

YONETSU Miwa, Coach (INAC KOBE LEONESSA U-15)
There were issues but I appreciate the players for doing their best. They are strong in attacking, but at the same time they are unstable especially when they are pushed, and ended up conceding goals. However, I can see that they have grown up by the fact that they could come up to this semi final, defending consistently in every match. We have few players who are very confident, so this is such a great experience for us that we could qualify for the semi final without any previous experience in this championship. I’m sure that the players are now more confident by playing evenly against one of the strongest teams of Kanto. We have learned what we need to do to be stronger in this opportunity. 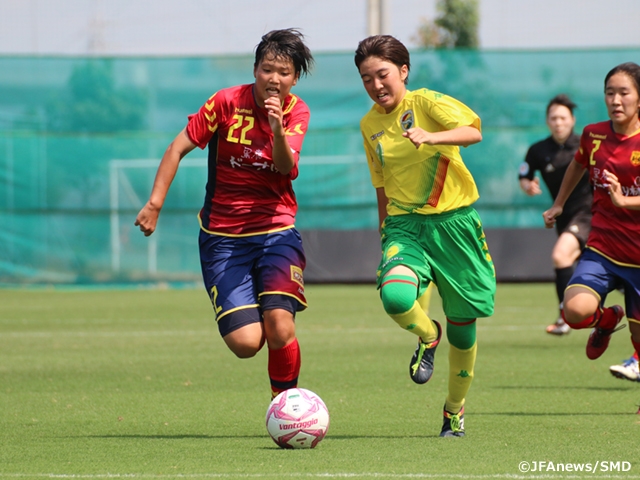 The second match was JFA Academy Fukushima vs. NOJIMA STELLA KANAGAWA SAGAMIHARA AVENIRE. Fukushima took control with their rhythmical pass work, but they couldn’t score and the 1st half ended 0-0. The team’s Coach MISHIO Shota reviewed it: “They made more mistakes than usual. One of the reasons was the hot weather.”

The match moved in the 33rd minute, right after the beginning of the 2nd half. Fukushima’s pass worked well from ISHIDA Chihiro to IWAI Ran, and finally SHIROWA Reina took a shot to the left corner of the goal. Fukushima scored the opening goal. In the 41st minute, they got a free kick near their opponent’s penalty area and TOMIOKA Chihiro smashed a direct shot to make the score 2-0. She mentioned this shot after the match: “It was one of the positions that I regularly practice.”

NOJIMA STELLA who had to be patient for most of the match time, started to attack from 5 minutes before the end. In the 59th minute, TAMURA Emina took a shot from a right side throw-in, and in the 60th minute SAKAMOTO Akari took another shot, but both shots couldn’t find the back of the net. The match ended with JFA Academy Fukushima’s victory 2-0. 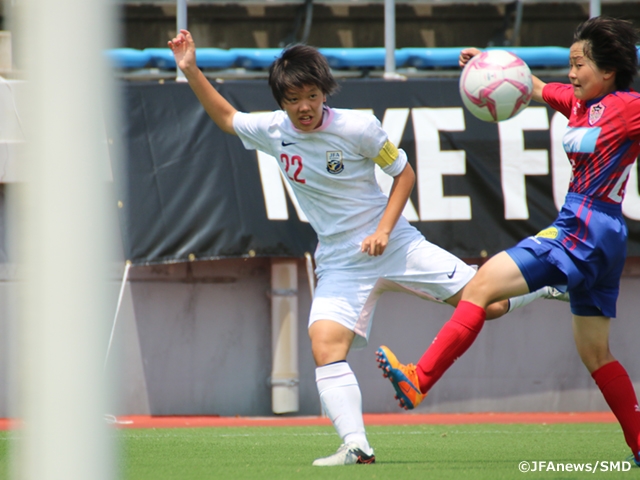 KOIKE Yuka (NOJIMA STELLA KANAGAWA SAGAMIHARA AVENIRE)
It is such a shame that we couldn’t win today. Due to this hot weather, we couldn’t encourage each other and move as we wanted. In this situation, our team mates who weren’t selected for this match encouraged us a lot, and we all tried our best on the pitch to respond to their support. We have understood what is eligible and what is missing by playing against national-level teams. We wanted to win the title, but we still have another match; we want to win and get the 3rd place.

TOMIOKA Chihiro (JFA Academy Fukushima)
Last year we couldn’t deal with this type of hot weather and ended up as runner-up. This year, we have had very tough training, running a lot. Our advantage is focusing on team play very well and encouraging each other. I believe that we could win because we could encourage each other even in the very difficult time today. Up to now, we have been able to share what we should do such as how to make advantageous situation in numbers of players. These things are the ones we have trained together. We have been in a good condition, so I expect that we can get revenge in this final.

The final match will be held on 30 July at J-GREEN Sakai. KUROKO Hitomi says, “we have worked hard to make our Coach IKEDA Yuki Japan’s No.1 coach.” JEF’s advantage is their consistent defence; they have conceded only 1 goal in their previous 4 matches. If they can mix well with their aggressive style to steal the ball from the front line and with their side attacks made mainly by NAKAO Momo, they should be closer to winning the title.

On the other hand JFA Academy Fukushima is challenging this final for the second time after last year. They have scored 19 goals and conceded 2 goals; their advantage seems to be offence. The team’s Coach Mishio raised one of the keys of this final as “to keep positive mentality.” He says: “I know that they won’t be able to play as they usually can due to tiredness. That’s why how much they can keep themselves positive will be the key.” For both teams, this is going to be the big challenge to get the title for the first time. The final match will kick off at 11:00.