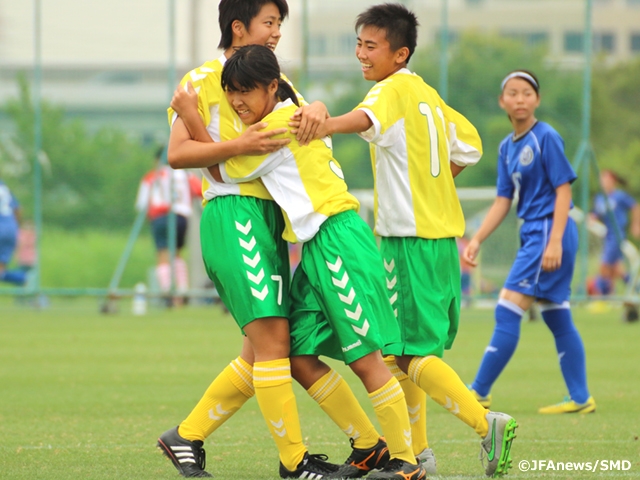 Monday 25 July saw the eight matches of the 2nd Round in the 21st All Japan Youth (U-15) Women's Championship.

The match between Tokushima Lateesha (Shikoku 1/Tokushima) and SFIDA Setagaya FC Youth (Kanto 6/Tokyo) moved in the opening minutes. In the fourth minute, Setagaya earned a corner kick through their attack from the wing. URABE Mizuki reacted to a cross in front of the goal and headed home, striking the opener. Tokushima, however, attacked back immediately. In the 13th minute, TANAKA Mitsuru received a pass from MAEDA Kasumi, who got through the centre, and scored the equaliser. Then, in the 15th minute, ONISHI Ayuka reacted to a corner from the left to strike a goal with a header, turning the game around.

Although Setagaya was one down after the first half, TAKISHITA Mahiru initiated numerous attacks from the wings in the second half, putting pressure on Tokushima. In the 44th minute, their main defender Onishi of Tokushima injured her foot and they had to play with the remaining 10 players while she was off the pitch. The team defended solidly, not allowing the opponent to score. The coach OTA Hiroshi later commented: “the players showed their spirit. While Onishi is away, they had to work much harder.”

In the 57th minute, AIDA Sayu of Setagaya won through a scramble and struck an excellent shot, only for it to be saved suberbly by KANAZAWA Izumi. Setagaya also went close with a header from a corner kick, but the shot hit the goal post. Tokushima was lucky enough to sustain their lead until the final whistle and reached the quarterfinals. 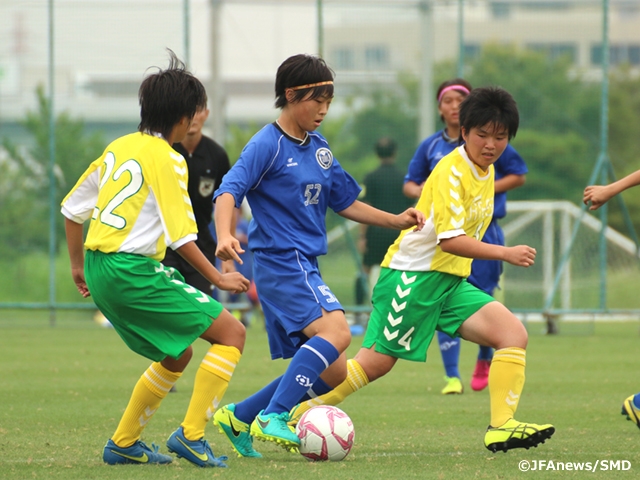 OTA Hiroshi, Coach (Tokushima Lateesha)
The support from the players on the bench and their guardians surely helped us earn the victory. However, the main credit goes to the players on the pitch, who performed very hard. They stayed vocal throughout the tough streches and kept their concentration. It’s the third time we’ve participated in this championship; the current squad is the best ever, but we’re still finding what to do as a team. Our original aim was to win the first match. Now, we will focus on winning every game, beginning with the quarterfinal.

HARADA Fuka (Tokushima Lateesha)
It meant a lot that we scored two goals to turn the game around without losing our confidence after allowing the opponent to strike the opener. In the second half, ONISHI had to leave the pitch due to injury. However, we played even harder until the final whistle thinking, “let’s perform better to cover her absence.” We’ve been focusing on practising how to approach the opponent with the ball in preparation for this championship. I believe we have been displaying our achievements in training in the last two games. I’d like win the next match and get a medal.

AKASAKA Takafumi, Coach (SFIDA Setagaya FC Youth)
We had been performing well up until we struck the opener from a set piece. I feel frustrated that we couldn’t prevent the opponents' attack afterwards and conceded two goals.The players were communicating and collaborating better one month prior to the championship.

After back-to-back tough games in the Kanto qualifying round, it was miraculous that we earned another victory in the nationwide championship. I’d like to point out that the players gave it their all. I believe they will improve even more through this defeat, and, hopefully, they will aim higher in the older-category tournament.

URABE Mizuki (SFIDA Setagaya FC Youth)
Until recently, the team lacked harmony, resulting in a negative atmosphere. However, we discussed our problems thinking, “we must change.” We were gradually able to play as a united team. This championship is one of the most important competitions for the U-15 generation. We have been aiming to win the championship to show our gratitude to our families and staff, who have been supporting us, by displaying our achievements over the last three years with our teammates. I wish we could respond to their expectations by getting better results. 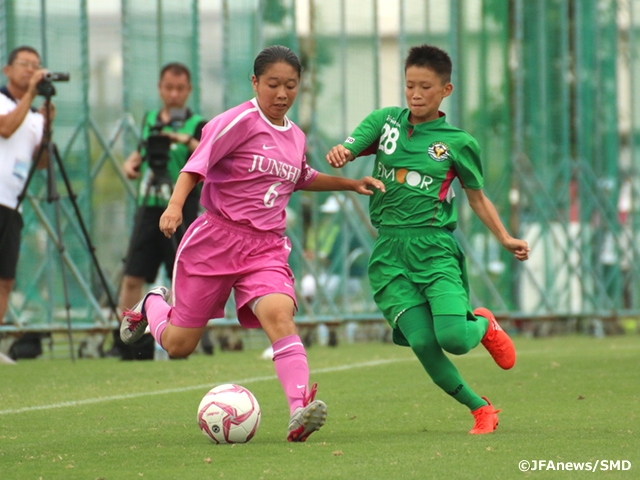 The four quarterfinals will be held on Wednesday 27 July, the fourth day of the championship. Looking to advance to the final four, upsets can happen.

The game between NIPPON TV MENINA SERIAS, who aim to become champions after two years, and INAC KOBE U-15, who are eager to win the championship as a newcomer, cannot be missed. Spirits are very high among Serias, as the captain WATANABE Nana stated: “we were disappointed, as we failed to qualify for the championship last year. We’ve been practicing hard this year. So we are determined to become the best in Japan again.” Inac, on the other hand, have gained confidence by beating the championship favourites, Urawa, in the 2nd round. NAKAO Jyunna commented: ”we’ve been mentally strong in this championship. By winning against Urawa, I believe we’re building up momentum.”

After making their debut in the tournament, NOJIMA STELLA KANAGAWA SAGAMIHARA AVENIRE advanced to the quarterfinals, demonstrating their strong defence led by the captain OMORI Soyoka, and kept a clean sheet in two consecutive games. In the semi-final, it is vital to prevent attacks from Kamimura Gakuen, who scored seven goals in the last two games.

Tokushima will meet last year’s finalists, JFA Academy Fukushima. The coach OTA commented: “our individual strength near the ball has improved.” The key will be how much Tokushima can press Fukushima’s attackers, who scored nine goals in the 2nd round.