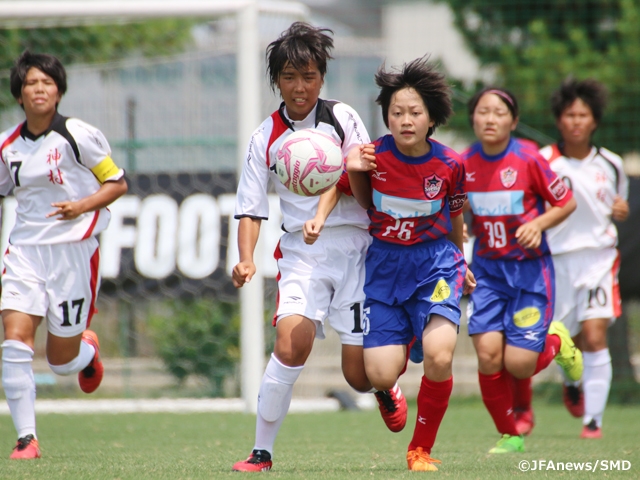 On Wednesday 27 July saw the quarterfinals of the 21st All Japan Youth (U-15) Women's Championship.

In the 17th minute, NAKAYAMA Misaki of NOJIMA STELLA reacted to a corner and scored the second goal. Then four minutes later, FUKUZUMI Sora struck a strong long-distance shot, building a three-goal lead.

Although Kamimura Gakuen were three goals behind, the team started to fight back. After one minute in injury time of the first half, KAGEYAMA Suzuka got through on the right side to pass the ball to KIKUCHI Maria, who scored with a lob shot just before halftime.

The coach MIYASAKO Fumika encouraged Kamimura Gakuen during halftime: “you can do it! Let’s score two more and level the game!” Right after the second half started, Kageyama took a shot at goal, though it hit the crossbar, built up momentum for Kamimura Gakuen. In the 34th minute, AIKAWA Haruna created a goal-scoring opportunity, getting through on the left side. However, the shot hit the right goalpost, and the team could not find the back of the net.

Kamimura Gakuen never gave up and continued to attack. In the 42 minute, KAWANO Suzu fired a long-distance shot near the halfway line, closing the gap to one goal. However, in the 44th minute, Kamimura Gakuen let the opponent score their fourth goal. Coach Miyasako later noted: “that was the final straw."

Although Kamimura Gakuen kept attacking from the sides or with long-distance throws looking for two more goals, they could not score against the NOJIMA STELLA’s solid defence. OMORI Soyoka of NOJIMA STELLA commented: “we were determined to win, which was reflected in our performance.” NOJIMA STELLA won the game 4-2 and advanced to the semi-finals.

HASEGAWA Ayumi, Coach (NOJIMA STELLA kANAGAWA SAGAMIHARA AVENIRE)
Kamimura Gakuen is an excellent team. I expected them to strike back despite our lead. Their attack was stronger than I anticipated. We defended with everything we had, which led us to victory. Scoring again just after conceding the second goal meant a lot to us. Undoubtedly, the players have been improving mentally through this championship. I don’t feel that we’re newcomers in this championship. As we aim to become the best in Japan, I expect the players will show their determination in the semi-final.

OMORI Soyoka (NOJIMA STELLA KANAGAWA SAGAMIHARA AVENIRE)
It was good to score three goals first, but the opponent responded with immense force. Although we were under pressure for a long period of time, especially in the second half, we stayed vocal and encouraged each other. So we survived that tough period. We used to feel demoralised if the opponent had closed the gap by scoring two consecutive goals. However, we stayed positive and fought back. I’d like to play hard for the players who can’t be on the pitch in the semi-final as underdogs.

MIYASAKO Fumika, Coach (Kamimura Gakuen Junior High School Women's Football Club)
Kamimura Gakuen’s strength is to intercept the ball up front and to attack from the sides. However, we played hastily, focusing only on stealing the ball, because we conceded three goals in the first half. We also let the opponent counter-attack a lot. We struggled to show our style before the final whistle. We failed to reach the semi-finals again just like last year. We learned how difficult it is to regain composure and stay aggressive after rest days. It’s my fault that I couldn’t lead the players to perform at their best.

KIKUCHI Maria (Kamimura Gakuen Junior High School Women's Football Club)
Although we encouraged each other “let’s earn another victory today to play our fifth game,” we couldn’t win. The result was very frustrating. Thanks to my parents that I’ve been able to play football. The best way to show my gratitude is to perform well. My goal was to win this championship and to become the best in Japan, showing my sincere appreciation. So I am disappointed that I failed to do so. At times, we were able to demonstrate the Kamimura Gakuen’s style of football. However, it is regrettable that we didn’t have the stamina to run until the final whistle.

JEF UNITED ICHIHARA CHIBA LADIES U-15, who had lost in the quarterfinals in two consecutive championships in 2013 and 2014, met NGU Nagoya FC Ladies. In the 28th minute, KUROKO Hitomi, whose strength is “to run into the space behind the opponent,” came through and passed the ball to OSAWA Haruka, who struck the opener. The team scored two more goals against Nagoya FC to reach the semi-finals. 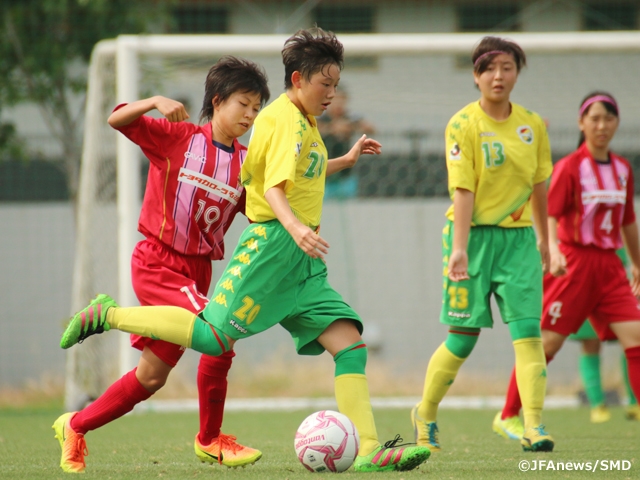 Nippon TV MENINA SERIAS played against INAC KOBE LEONESSA U-15. In the 11th minute, HIRAI Amyu of INAC was taken down inside the box and earned a penalty kick. She scored the opener from the spot. Although one of Serias’ players was sent off, the remaining ten players gave it their all attempting to level the game. However, the team conceded another goal in the 40th minute. Newcomers INAC won the game 2-0, reaching the semi-finals. 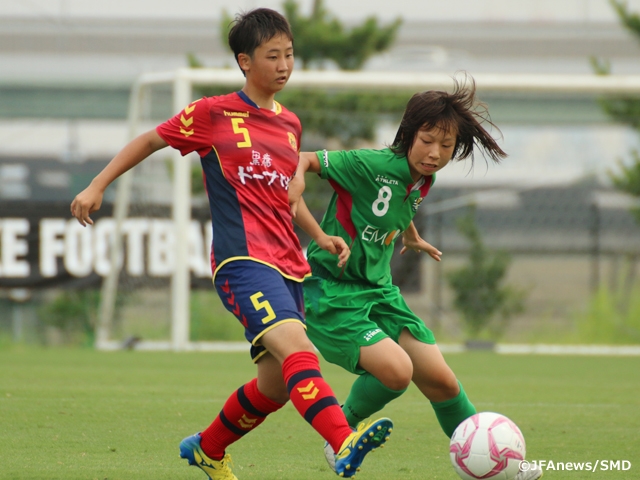 JFA Academy Fukushima, who had scored 13 goals so far, once more demonstrated their attacking strength, starting with ITO Megumi’s shot in the 9th minute. The team won a sweeping four-goal victory against Tokushima Lateesha. As a result, JEF will play against INAC, while NOJIMA STELLA will face JFA Academy in the semi-finals on Thursday 28 July.