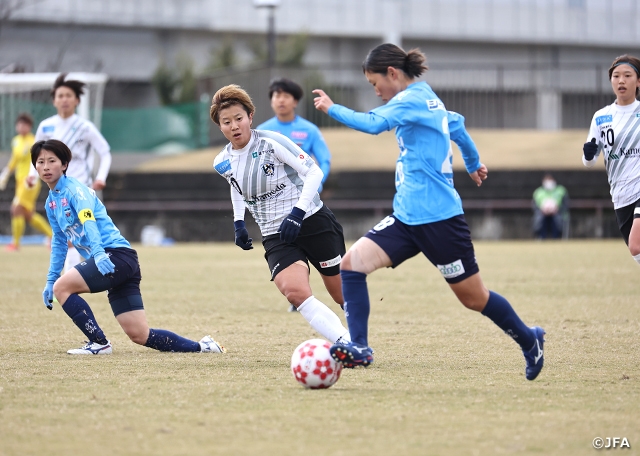 Yokohama, who had Kamogawa’s number his season, winning two out of two matches in the league, took the initiative of this match, as TAKAMURA Chisato and OBARA Yuria created chances from the flanks with HIRAKAWA Anna anticipating for her opportunity to score goals. However, led by their centre-half TSURUMI Ayaka, the Kamogawa defence showcased tenacious efforts to keep the Yokohama offence scoreless in the first half.

After being dominated by Yokohama in the first half, Kamogawa started to pick up their pace in the second half, as FUKAZAWA Risa and KIRA Chinatsu made aggressive runs to threaten the opposing goal. With YOSHIDA Nagisa displaying great coverage in defence, Yokohama managed to keep the Kamogawa offence at bay, but the deadlock was finally broken in the 86th minute, when Kamogawa’s URASHIMA Risa intercepted a pass before firing a right footed shot from distance, which ended in the back of the net. This goal turned out to be the decisive goal, as Kamogawa advanced through to the third round with a 1-0 victory over their Nadeshiko League rival. 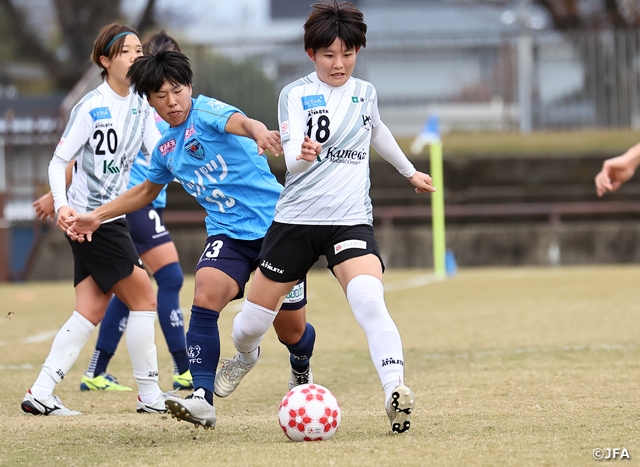 With six of their players named as this season’s best eleven of the Nadeshiko League, Kunoichi pounced on the university side from the early minutes, as league MVP SUGITA Ami orchestrated the attacks from the left side. MORI Hitomi and NISHIKAWA Asuka each scored a goal from a set-piece in the second and 17th minute respectively, giving Kunoichi an early 2-0 lead.

In efforts to rally back, Tsukuba collected the ball to their ace CHIBA Remina, but struggled to create chances against the tight pressure applied by the Nadeshiko League champions. With Mori scoring another goal, Kunoichi entered the break with a 3-0 lead. 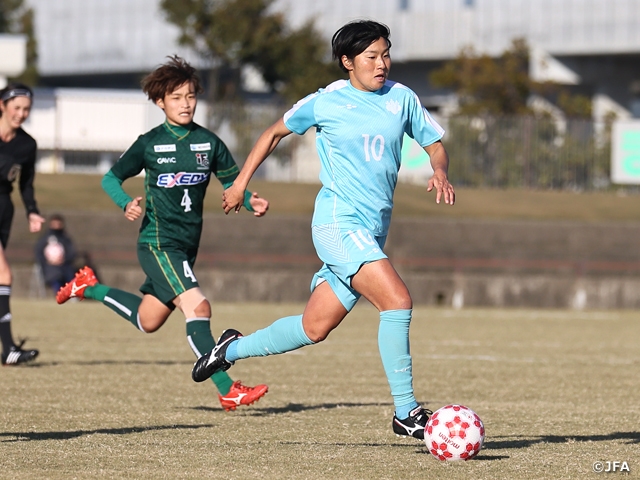 After firing 14 shots in the first half, the Kunoichi offence started to lose momentum in the second half, as they struggled to break down the Tsukuba defence led by HASUWA Makoto and SHIMURA Misaki.

Following her twin sister TSUNEDA Nana, who entered the match at the beginning of the second half, TSUNEDA Mayu was introduced in the 69th minute, adding depth to the Kunoichi offence. With Nishikawa adding another goal to their tally, Kunoichi advanced through to the third round with a convincing victory.

University of Tsukuba will now work towards the All Japan University Women's Football Tournament, which will take place in three weeks.

MF #16 KOSUDA Rina (NHK Spring Yokohama FC Seagulls)
Although we were able to take the initiative of the match, we allowed our opponent to capitalise on their few chances and lost the match in a disappointing way. Despite winning two of our previous meetings in the league, Kamogawa is a strong opponent. We were able to create chances from the flanks but didn’t have the quality to convert them. We will continue to work hard ahead of the next season, so that we can showcase the football style we are striving.

MF #7 URASHIMA Risa (Orca Kamogawa FC)
After losing to the same opponent twice in the Nadeshiko League, we were hoping that the third time would be the charm. Although we were dominated for a long time, we were able to capitalise on our few chances. When I scored the goal, I saw the goalkeeper was out of position, and I knew my shot was going in as soon as I took it. We will now face Shizuoka SSU Asregina, who we have never played before, but we will try to stay aggressive and take the initiative of the match.

MF #5 NISHIKAWA Asuka (Iga FC Kunoichi Mie)
With this being our first match of the tournament, winning was our top priority, but we made too many mistakes. I was able to become the top scorer in the Nadeshiko League because of the great assists. While the team’s victory remains as our top priority, I will continue to make efforts to score goals. We are an attack-minded team, so we would like to win our next match against Fukuoka J. Anclas by playing aggressively.

FW #10 CHIBA Remina (University of Tsukuba)
We went into the game determined to show what we had prepared for against a superior opponent. However, the goals we conceded in the early minutes really hurt us. It didn’t feel like we were totally dominated, but they really showed us the difference between a university team and the Nadeshiko League champions. At the beginning of this season, we set a goal of winning the All Japan University Women's Football Tournament, so we would like to give our best efforts to prepare ourselves for the tournament.