The match between two teams based in the Chugoku region, Ange Violet Hiroshima (Nadeshiko1/Hiroshima) and Diosa Izumo FC (Chugoku/Shimane), saw action from the early minutes.

The opening goal was scored by Ange Violet, who conceded the opener to JEF United Ichihara Chiba Ladies U-18 in the first round, as the ball was connected through YOSHITANI Akane and SHINJYO Mai, before KANDA Wakaho struck a header to mark a goal in back to back matches. 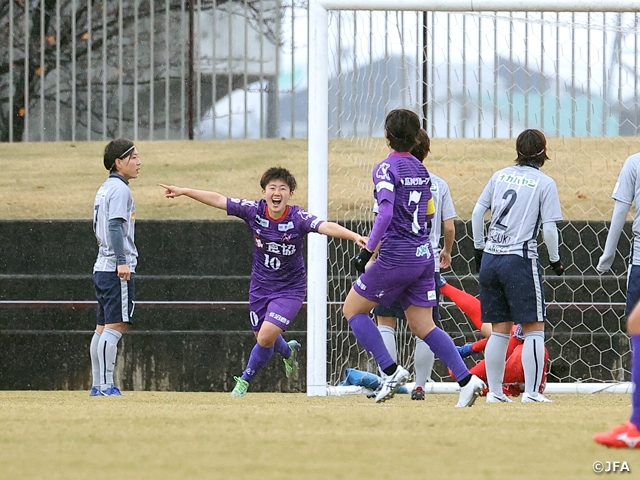 After taking an early lead, the Nadeshiko League Division 1 side, showcased a solid performance in defence to keep Diosa, the three time defending champions of the Chugoku Women's Soccer League, at bay. With momentum on their side, TOMITA Miyu and KAWASAKI Saya penetrated the flanks to create numerous opportunities, which led to Ange Violet’s second goal in the 36th minute, when Kawasaki struck a powerful shot with her right foot to make it 2-0, as the winger also registered her second goal in two matches.

In efforts to come back from a two goal deficit, Diosa rallied in the second half, as ASAUMI Saki struck a shot in the 61st minute, followed by the attempt made by YAMAMOTO Saori in the 68th minute. However, led by MOTOFUJI Risa, Ange Violet continued to showcase great composure in defence to keep away Diosa from creating close opportunities. 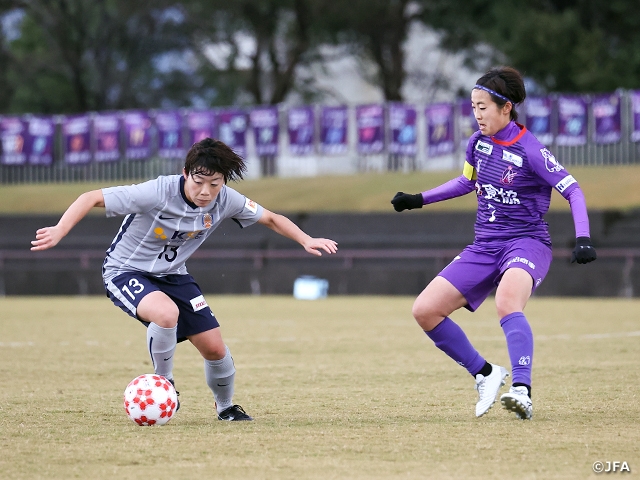 In the 77th minute, SHIMAMURA Kumiko converted a corner kick with her header to mark her first goal of the season, which sealed the victory for Ange Violet, as the Hiroshima side advanced through to the third round with a 3-0 victory.

The match between Cerezo Osaka Sakai Ladies (Nadeshiko1/Osaka), who finished third in the Nadeshiko League, and Japan Soccer College Ladies (Hokushinetsu/Niigata), who defeated Otemon Gakuin High School 6-3 in the first round, took place under heavy rain and hail.

Despite the inclement weather, Cerezo Sakai played with great composure to take the initiative of the match, as KOYAMA Shinomi scored the opening goal in the 10th minute. After TABATA Haruna made it 2-0 in the 16th minute, Koyama marked her second goal of the match when she reacted to the deflection of a shot taken by IWAMOTO Marino to give Cerezo Sakai a 3-0 lead at halftime.

Led by YAMAMOTO Hao, who scored four goals in the first round, JSCL tried to create opportunities from counterattacks, but Cerezo Sakai continued to gain momentum and showcased their dominance in the second half.

After the shot taken by Iwamoto induced an own-goal in the 48th minute, Cerezo Sakai went onto a goal spree, as NAKATANI Rina and Tabata each scored a goal, followed by a pair of mid-range shots scored by Koyama. With the 16 year old striker, who was named into the best 11 of the Nadeshiko League, scoring four goals, Cerezo Sakai cruised into the third round. 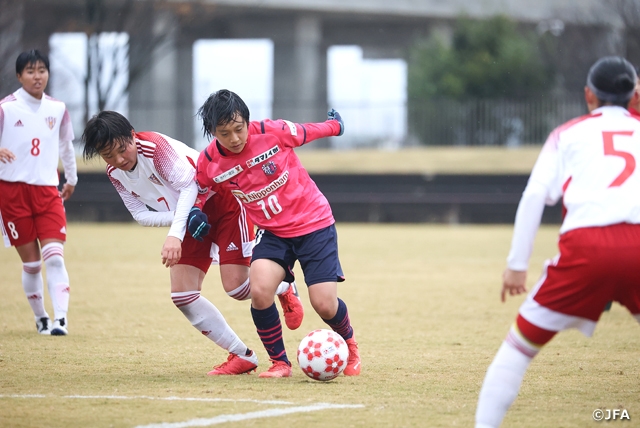 Although it was a tough match, the players of JSCL played extremely hard until the end, as shown in the play made by their captain KABUTO Ayaka, who made a tremendous effort to clear the ball at the goal line. Following their elimination from the Empress's Cup, JSCL will now enter the 30th All Japan High School Women's Football Championship as Kaishi Gakuen JSC High School.

MF #7 MOTOFUJI Risa (Ange Violet Hiroshima)
As a team from the same Chugoku region, we have faced Diosa many times in the past, so we are well aware of each other’s strengths and weaknesses. That is why we focused on playing our own football today. We learned from our mistake in the first round, where we conceded in the early minutes of the match, which allowed us to enter the match strong and score the opener this time. We are starting fresh with a new coach and the team will be in a better mood than ever going into the third round.

SAKAI Yoji, Coach (Diosa Izumo FC)
It felt like we lacked a little bit of commitment in the first half, but the players managed to make the necessary adjustments in the second half. This team is capable of entering the match with a strong sense of determination, so I think it was my fault for not being able to prep our players in such way. We failed to get promoted to the Nadeshiko League this season, but we must admit that we didn’t have what it takes to get there. We hope to make the most of this experience so that we can become a team that everyone can be proud of.

FW #10 KOYAMA Shinomi (Cerezo Osaka Sakai Ladies)
We were able to gain momentum by scoring an early goal. However, there were stints when we struggled to score goals. We finished third in the Nadeshiko League this season, but there were matches we could have won if I had scored a goal, so I think we could have finished even higher. Although we were able to score many goals today, it won't mean anything if we don't make it count for our next match, so we will continue to work hard to showcase an entertaining match.

SHIGETA Manami, Coach (Japan Soccer College Ladies)
There are not many opportunities to play against first division teams of the Nadeshiko League, so we entered the match as challengers. Although we were able to score six goals in the first round, we also conceded three goals, so we trained all week to improve our defence. Some of the players were crying after this loss, but they worked hard for the entire 90 minutes, and there were positive aspects we can take back from this match. We will reset our mind and start training ahead of the All Japan High School Women's Football Championship, which will take place in a month.