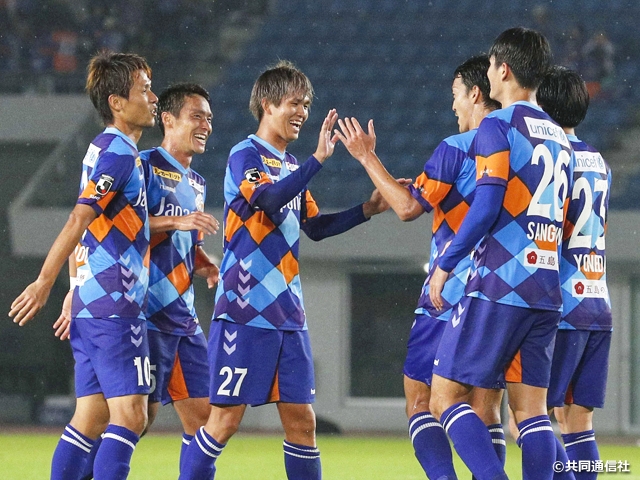 After clinching the club’s first ever Emperor’s Cup quarterfinals, V-Varen Nagasaki defeated another J2 side, Ventforet Kofu to advance to the semi-finals for the first time. After the victory, Nagasaki’s coach TEGURAMORI Makoto reflected on the match, “We were able to utilise the home court advantage to score the opening goal, which led us to this victory.” The coach continued by sharing his aspiration ahead of their semi-final match against the J1 side, Kashima Antlers, “Everyone is looking for an upset. We want to give Kashima a big surprise.”

The match started with Nagasaki taking the initiative through their quick ball movements. They scored the opening goal in the ninth minute, when HATA Junki forced a turnover in the Kofu territory before assisting the goal scored by YOSHIOKA Masakazu. Nagasaki managed to double their lead just five minutes later, when NIIZATO Ryo captured the goal with a volley shot in the 14th minute. Despite conceding two goals to the home side, Kofu responded by scoring a goal in the 31st minute, when OTA Shusuke struck a shot following a corner kick to cut their deficit in half before halftime. 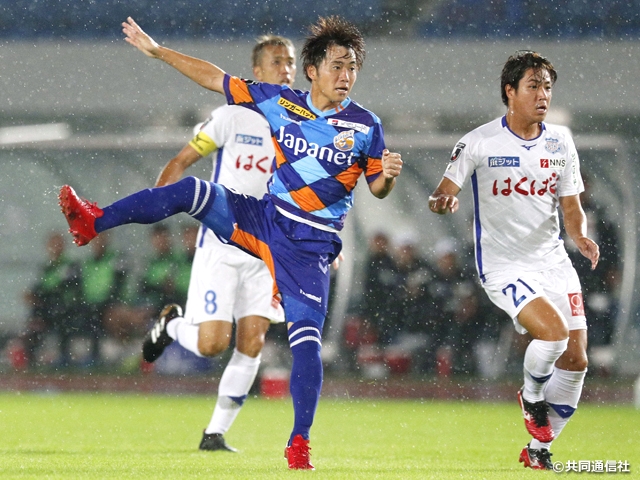 Both goalkeepers showcased a superb performance in the second half, as Kofu’s OKANISHI Kosuke made numbers of fine saves to block the shots of SHIMADA Yuzuru and HASEGAWA Yu, while Nagasaki’s TOMIZAWA Masaya denied Kofu’s final efforts to score the equaliser towards the final minutes of the match. 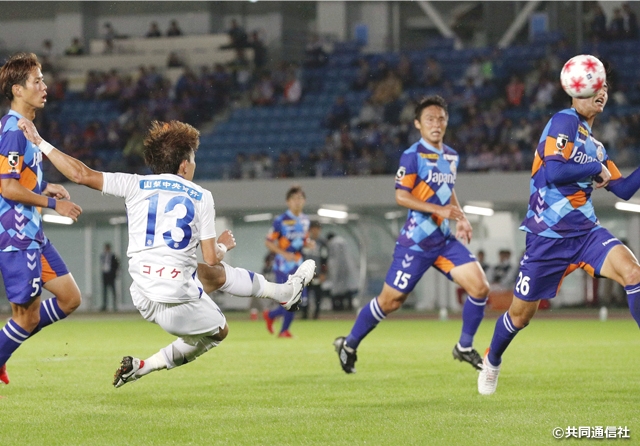 Following last year’s top eight finish, Kofu made another deep run at the Emperor’s Cup, but failed to best their franchise record. Coach ITO Akira shared his disappointment after the match, “It is very regretful that we couldn’t advance through to the next stage. Our players gave their very best and we managed to score a goal in the first half to give us a chance to win the match in the second half, but we didn’t have what it takes to overturn the match.”

TEGURAMORI Makoto, Coach (V-Varen Nagasaki)
We are in a tough situation at our league. With the team entering this cup match following back to back losses at our league, we wanted to display our unwavering determination in this match, and I believe that we were able to showcase our potential as a team. I told my players not to consider the home court advantage, especially against an opponent who we share a record of one win and one loss at the league matches. We knew this was going to be a tough match and the opening goal really turned out to be a huge goal for us. Our determination to fight with persistency led to this victory. By reaching the semi-finals, we have now set a new record for the club and we can continue to play football in December. We will carry this momentum into our league playoffs before entering the Emperor’s Cup semi-finals.

GK #21 TOMIZAWA Masaya (V-Varen Nagasaki)
Kofu’s ARAKI Sho is a player from my hometown and knowing how good he is, I really had to keep my eyes on his plays. The opening goal came from a designed play and Yoshioka did a great job to score that goal. It is very difficult to stop the ball in rainy conditions, but it got even more difficult after scoring two goals, because we played more defensively to contain the opponent’s strong points.

ITO Akira, Coach (Ventforet Kofu)
Our players played extremely hard, but we looked stiff in the early minutes of the match. We gave up two goals in the first half, and we had to push ourselves for the remainder of the match to come from behind under this rainy condition. Our players gave their very best and we managed to score a goal in the first half to give us a chance to win the match in the second half, but we didn’t have what it takes to overturn the match. Whether it’s the quality of our plays, the way we control the match, or my ability to manage the game, it is regretful that we fell short from winning the match.

FW #13 OTA Shusuke (Ventforet Kofu)
It felt like we were a bit rattled from our warmups and that led to our team conceding those goals in the early minutes of the match. I was committed to take a shot when I had the opportunity. I really wanted to earn results in this match, so I didn’t hesitate to take that shot. Even though it was from a tough angle, I knew exactly where the goal was.