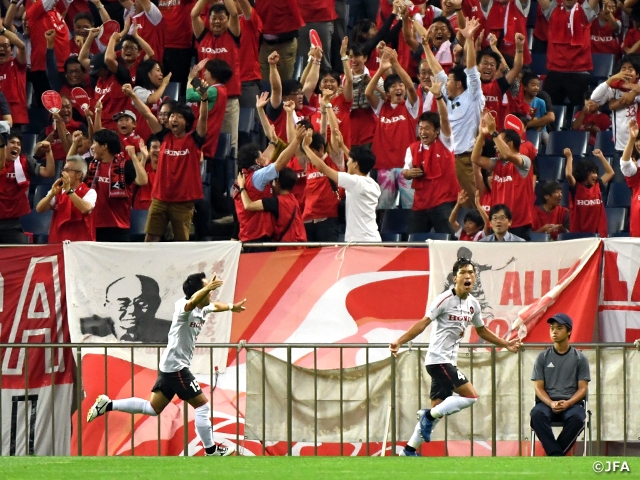 Despite facing the defending champions, Honda FC entered the match with an attack-minded formation, as they showed great ball movements while seeking for their opportunity to crack open the Urawa defence. The players of Honda FC kept a good distance between each other and displayed quick transitions from offence to defence.

With their line-up featuring many rookies and young players with limited experience at the top team, Urawa struggled to pick up their pace. Many of their attacking opportunities came from individual efforts and the team failed to create any major threats against Honda FC. The match entered halftime scoreless as the two teams took just two shots apiece in the first half. In efforts to break the stalemate, Urawa brought in MUTO Yuki from the start of the second half, but the defending champions continued to struggle in offence. 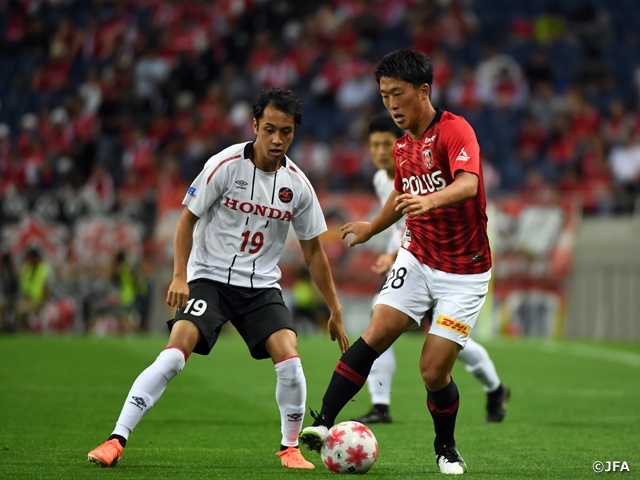 The match remained scoreless deep in the second half, as Honda FC made multiple substitutes to take care of the side attacks initiated by Urawa and to add more layers to their offence. And it was the visiting side who broke the deadlock with less than 10 minutes left in the match. The play started when TONO Daiya made an attempt to penetrate the box from the centre, but his effort was blocked by the Urawa defence. SASAKI Toshiki collected the loose ball and dribbled into the box at the right side, before sending a well driven cross into the mix. It was TOMITA Yuya, who made the timely run into the box and struck the ball into the Urawa goal to give Honda FC a 1-0 lead. Just four minutes later, Sasaki broke through the right flank before making a cut into the box and delivered the set up pass to allow HARADA Kai to slot the ball into the net, doubling the lead for the Shizuoka side.

Despite giving up a penalty kick to Urawa at the end, goalkeeper SHIRASAKA Fuma made the save to keep their clean sheet intact. 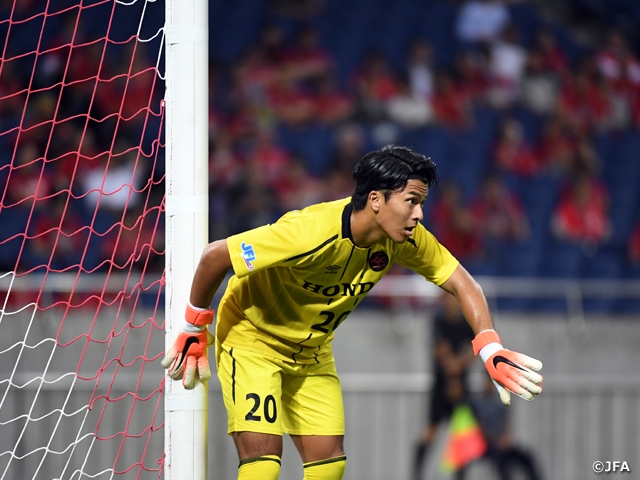 With Honda FC coming through with yet another major upset, the team advanced to their first quarterfinals since 2007. Honda FC will seek to advance to their first ever semi-finals when they face Kashima Antlers (J1) who has beaten Yokohama F. Marinos (J1) on this day.

OTSUKI Tsuyoshi, Coach (Urawa Red Diamonds)
We are fully responsible for this loss and we feel very sorry for our supporters. Not only did we concede the opening goal, but we gave up another goal from a similar play soon after. Although we have been playing under a tight schedule, we still had to approach this match with more caution. There must have been more things I could have done to help the team approach this match, including the squad selection.

SUGIMOTO Kenyu (Urawa Red Diamonds)
We told each other before the match that we must enter this match as the challenger. Despite seeing our side struggle in the first half, we still managed to finish the half scoreless, so we wanted to showcase a better performance in the second half. By adding Muto, we were able to create more movements in our attacking third, but we ended up conceding back to back goals, which was very disappointing. I feel very guilty for missing that penalty kick, but with our next league match fast approaching, I will just have to pick myself up and move on.

IBATA Hiroyasu, Coach (Honda FC)
Although there were plenty of room for improvements, we managed to keep a clean sheet during the first half, and that’s something we should be proud about. The players made great adjustments to their defensive approach in the second half. Our overall performance was great, but more than anything, our players showed great spirit to fight against the defending champions to earn this wonderful result. We lost to Kashima last year, so we want to avoid losing to them again this year. We don’t take pride in parking the bus against a J. League club, so we will continue to stick with our football style and challenge ourselves to make a deeper run.

SASAKI Toshiki (Honda FC)
I am super happy that we were able to win 2-0 against the defending champions. Although we managed to showcase great ball movements in the first half, we failed to take shots, so we made the necessary adjustments to create more attacking threats in the second half. We entered the match with the intention to win 3-0, but played too passively in the first half, so our coach gave us a pep-talk during halftime to make us realise that we have to play our usual game. I was able to showcase my strengths in the closing minutes of the game, when our opponent started to get tired. Our goal is to win the tournament title, so we will continue to work hard and strive to win our next match.