A total of six round of 16 fixtures of the Emperor's Cup JFA 99th Japan Football Championship took place on Wednesday 18 September at various locations around the nation.

At Yamanashi Chuo Bank Stadium, Ventforet Kofu (J2) welcomed the seeded amateur, Hosei University to their home stadium. The match started out with Ventforet utilising long balls to seek for their opportunities, while Hosei University applied aggressive pressure to deny the J2 side from creating a major attacking threat. Facing the youthful university side who carried great momentum at this tournament, Ventforet struggled to finish their plays with a shot. However, the deadlock was broken by a spectacular pass delivered by the veteran defender, YAMAMOTO Hideomi in the 27th minute. The 39-year old’s delivery allowed SATO Koichi to break away into the open space and take on the goalkeeper one-on-one. With the Hosei University defenders catching up with him, Sato elected to pass the ball to SONEDA Yutaka, who slotted the ball into the open net to give Ventforet a 1-0 lead. 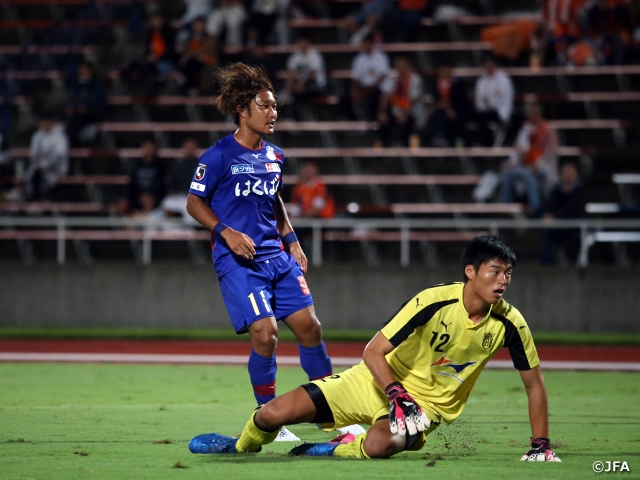 After conceding the opener, Hosei University turned on their aggression to apply pressure upfront. In the 39th minute, HASEGAWA Motoki was introduced to the game, as he added more depth to the University side’s offence. With the team shifting their formation to level the match, their efforts were paid off in the 77th minute, when KONNO Kazuya delivered a cross towards the box to allow MORI Toshiki to strike a header that captured the Ventforet goal. 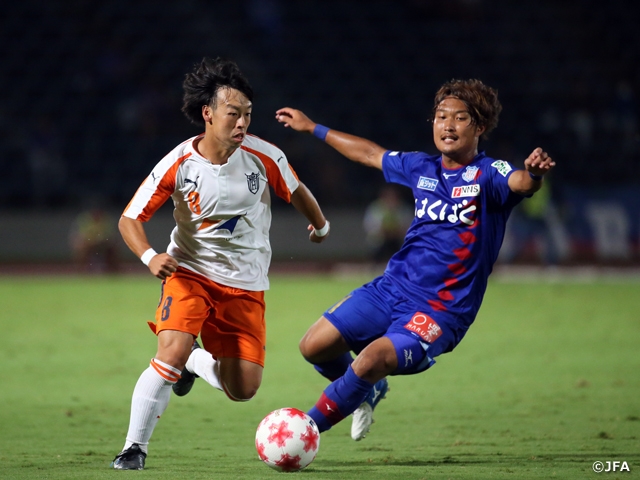 As the match entered overtime, the pivotal moment was once again created by the veteran defender. In the 93rd minute, Ventforet earned a free kick inside the Hosei University territory, where Yamamoto quickly restarted the play, as he later reflected, “no one was watching ball.” The quick start caught the university defenders off guards and allowed Sato to send the ball into the box, where MIYAZAKI Junma awaited to score the go-ahead goal. Despite the final efforts made by Hosei University, the J2 side managed to hold onto their lead and advanced to the quarterfinals.

The remaining two fixtures of the round of 16 will be played on Wednesday 25 September.

ITO Akira, Coach (Ventforet Kofu)
From the early minutes of the match, we managed to execute the style of football we’ve been striving for. The substituted players gave great efforts in defence and did a fine job to score the game winner for us. Every player contributed for the team until the final whistle. In order to make history for this franchise, we will give our best efforts to go beyond the quarterfinals.

YAMAMOTO Hideomi (Ventforet Kofu)
In the scene where we scored the second goal, now one, including our players, were looking at the ball. The only player who knew what I was doing was the veteran player, Sato Koichi. I felt like we had to capitalise on the smallest opportunities, because our opponent was such a strong team. Coach Ito kept telling us not to under-estimate our opponents because they are a university team. That is why we played with respect and it allowed us to keep our defence solid throughout the match.

NAGAYAMA Kazuya, Coach (Hosei University)
Our overall performance was not bad, but we cannot celebrate with this result. When looking at the small details, we might have had a good match, but as the representative of collegiate football, we are disappointed that we couldn’t earn the win today. This was a crucial match to prove the strengths of collegiate football. Although we were able to create some great opportunities, we were not critical enough to take down the match, so we must improve ourselves in that matter and help heighten the overall level of collegiate football.

KONNO Kazuya (Hosei University)
This is a very disappointing result, especially after we gave a positive performance. I will be turning pro next year, so I was fully committed to leave a mark at this tournament. This was perhaps the most painful loss I have ever experienced. A win today would have created new history, but the round of 16 remains to be a huge obstacle for university teams. Our opponent showed the difference between professionals and amateurs when they scored the go-ahead goal. Although we gave our very best in this match, we saw plenty of room for improvements and I feel like we still need to make more runs.