Kobe advance to ACL quarterfinals with win over Yokohama FM 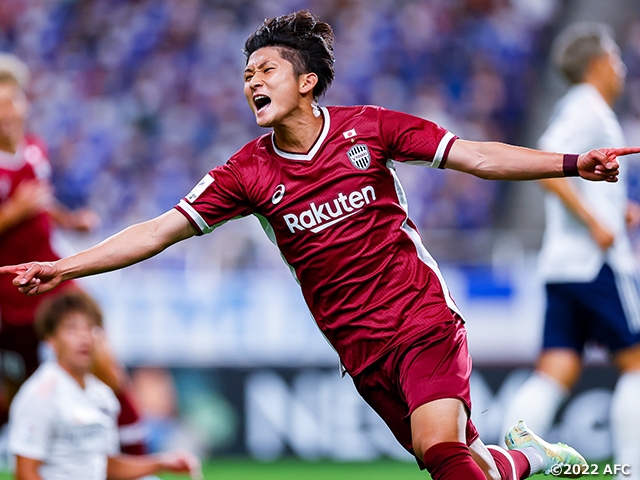 On Thursday 18 August, the knockout stage of the AFC Champions League (ACL) 2022 East kicked off at Saitama Stadium 2002, where Vissel Kobe faced Yokohama F. Marinos. Propelled by the goals scored by IINO Nanasei, SASAKI Daiju, and ODA Yutaro, Kobe managed to reach their second ACL quarterfinals in three years with a 3-2 victory. In this match, Kobe’s YAMAGUCHI Hotaru was named as the player of the match.

The two J.League sides, who both made their first ACL knockout stage appearance since 2020, entered with contrasting league forms, as Yokohama FM lead the league while Kobe are in 16th place, fighting to avoid relegation. However, as Kobe’s OSAKI Reo mentioned in the official press conference held on the day before, “the league standings are irrelevant at this moment,” the match started with Kobe taking the initiative.

The Kobe side, who entered the match with great intensity and applied aggressive pressure from the frontline, scored the opening goal in the seventh minute, when YURUKI Koya delivered a quick feed to Iino, who carried the ball into the penalty area before slotting the ball into the net.

Yokohama FM, aiming to reach the ACL quarterfinals for the first time in five attempts, responded right away, as NISHIMURA Takuma converted the cross sent by NAKAGAWA Teruhito with a header in the ninth minute to equalise the match.

Despite conceding the equaliser, Kobe continued to apply pressure aggressively and utilised the width of the pitch to create close opportunities with their quick attacks.

In the 15th minute, Yamaguchi responded to a pass delivered by OSAKO Yuya to fire a shot from distance, but his attempt was denied by the crossbar. Seven minutes later, SAKAI Gotoku penetrated the left side to send the ball to Osako, who once again setup the shot of Yamaguchi to threaten the opposing goal.

The aggression showcased by Kobe came to fruition in the 28th minute, when the ball was connected through Iino and Osako, before finding Sasaki in the box. The shot taken by Sasaki struck the hand of the opposing defender, granting Kobe a chance from the spot, which the midfielder converted himself to give Kobe the lead once again. 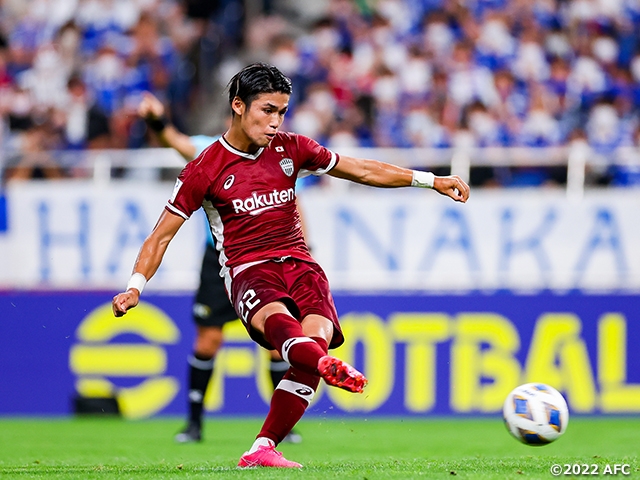 In efforts to rally back, Yokohama FM made attempts through the attacks of Leo CEARA and ELBER but couldn’t find ways to evade the quick pressure applied by the Kobe defence led by Matheus THULER.

However, the second half saw Kobe slow down their pace, as Yokohama increased their time on the ball, which led to the attempts made by KOIKE Ryuta, NAGATO Katsuya, and Nishimura, KIDA Takuya around the hour mark. In the 79th minute, Leo Ceara connected with a corner kick delivered by MIZUNUMA Kota, who entered as a substitute, only to see his effort being saved by Kobe’s goalkeeper MAEKAWA Daiya.

Kobe also had their chances, as Yuruki, Osako, and Osaki created opportunities to threaten the Yokohama goal, and their big moment came in the 80th minute, when Osaki delivered a through ball inside the box. It was Yamaguchi who responded to this pass, as the midfielder redirected the ball into the middle to setup the goal of Oda.

Now trailing by two goals, Yokohama made their final push to extend their tournament life, as Anderson LOPES collaborated with Elber to score back a goal in the 89th minute. 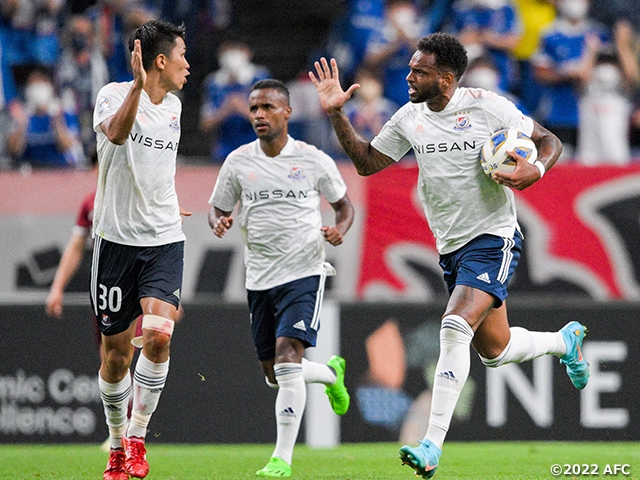 However, despite the final efforts made by Yokohama FM, the match ended 3-2 to send Kobe into the quarterfinals.

Following a scoreless first half, Jeonbuk Hyundai took the lead in the 46th minute, when SONG Min-kyu converted the cross sent by HAN Kyo-won. Daegu responded in the 56th minute, as ZECA showcased a spectacular individual effort to score the equaliser.

The match turned into a stalemate for the next hour, as the score remained tied until the closing minutes of overtime. The deadlock was finally broken when Modou BARROW broke through the left side before sending a cross towards the centre, which was redirected by GUSTAVO to setup the goal of Kim to send Jeonbuk into the quarterfinals.

With this victory, Jeonbuk Hyundai have now reached the ACL quarterfinals for the second year in a row, while Daegu were eliminated in the round of 16 for the second straight year.

The round of 16 fixtures of the Eastern division will continue on Friday 19 August, as Urawa Red Diamonds face Johor Darul Ta'zim (Malaysia) at Saitama Stadium 2002, while BG Pathum United (Thailand) and Kitchee SC (Hong Kong) are scheduled to clash at Urawa Komaba Stadium.

The fixtures for the quarterfinals, which are scheduled to be played on Monday 22, will be drawn on Saturday 20, and the semi-final will be held on Thursday 25. All matches beyond the round of 16 will take place at Saitama Stadium 2002. The final, which will be played between the finalists from the East and West divisions, will be played in a two legged format on 19 and 26 February of next year.

YOSHIDA Takayuki, Coach (Vissel Kobe)
It was an extremely tough match, but I am glad we were able to win. We were against the current leader of the J.League, so we were expecting an uphill battle. I sent off the players by telling them to give their best as a contender, and the players fought with great aggression until the very end. I think the match went as planned. I think this victory will give us momentum ahead of the next two matches of this tournament and our remaining league matches.

MF YAMAGUCHI Hotaru (Vissel Kobe)
It was a very tough match for the entire 90 minutes. We were up against a very good team, so there were stints where we were outplayed and conceded goals, but the team managed to stay compact and fight hard in both defence and offence, which I think led to this victory. 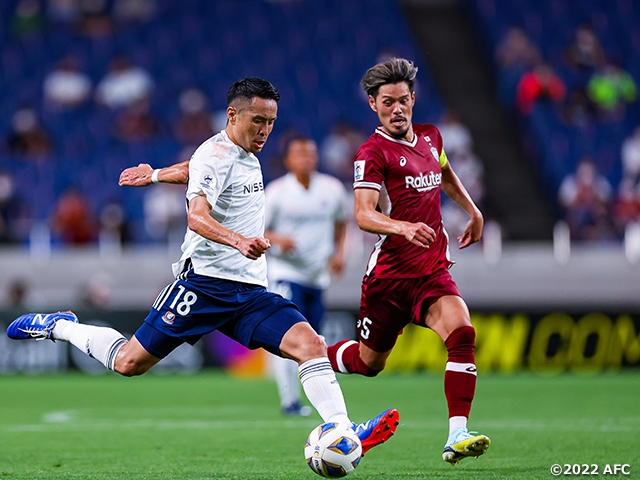 FW IINO Nanasei (Vissel Kobe)
I knew I would have a chance if I continued to make runs upfront. I feel like I was able to play with composure today. I hope I was able to showcase my strengths in the right flank, especially knowing that the team needs me to perform well in the flank. I have been able to communicate well with Osako and we have been able to work in tandem, which have been working out for both of us.

Kevin MUSCAT, Coach (Yokohama F. Marinos)
We are very disappointed with this result. Regardless of whether we had the ball or not, we played too passively in the first half. We were overwhelmed by our opponents’ pressure and couldn’t win the ball. It was great that we were able to equalise, but we conceded a penalty kick soon after. I think the players showed great willingness to rally back in the second half, but we didn’t have what it takes to win the match. We showed some flaws in terms of how we pressured the ball, but all and all, our opponents were simply better today.

MF KIDA Takuya (Yokohama F. Marinos)
We were all-in for this match, so I have no words to describe this feeling. From the early stages of the match, we knew what Kobe was looking for, but we couldn’t take control of the ball possession. We need to raise the quality of our plays while also sharing a mutual understanding as a team, so that we can overwhelm our opponents. That is an aspect I feel like I could have contributed more, so I feel responsible for this loss. I want to redeem myself by becoming a player who can lead teams to victory in matches like these.