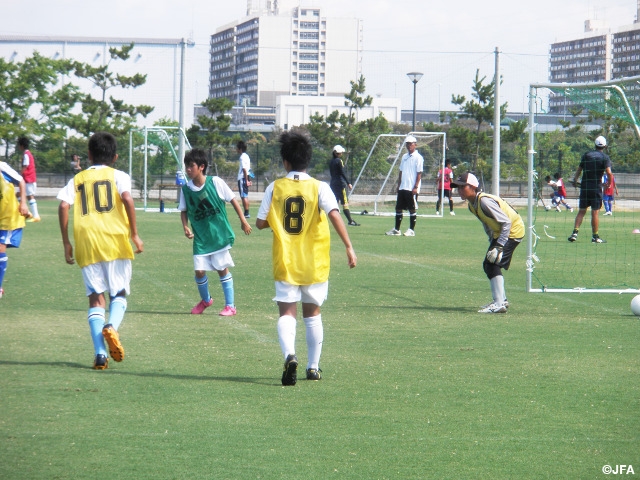 This article is part of an introduction to the policies and activities of each Prefectural Football Association which is divided into 12 categories: ‘Seniors’, ‘Class 1’, ‘Class 2’, ‘Class 3’, ‘Class 4’, ‘Kids’, ‘Women’, ‘Futsal’, ‘Beach Soccer’, ‘Referees Committee’, ‘Facilities Committee (Environmental Maintenance)’ and ‘Technical Committee’. We hope you read through this article and become familiar with the various activities held across the country.
This issue keeps discussing “Women” topic.

[Stagnant Organisational Change]
It was May 2012 that I took over my predecessor suddenly. At first I was thinking to do this job for one term, two years, but this is my third year. We regularly hold women’s committee periodic meeting once in two months. As well as we work on planning tournaments, there we try to make up our future visions and build up a system where we effectively exchange our opinions for our various projects.

We cannot say we have a lot of budgets, but we somehow manage to back women’s football. Our committee’s top priority has been “system-building”, but the problem we are facing is “lack of human resources” which is essential to make our projects better.

At present our event and tournament management relies on supports from a limited number of coaches and team staff members who are participating in that particular event. We thought solving this problem would strengthen the foundation of our committee and enable a drastic change of organisation to happen. Therefore at the committee in May 2013 we proposed the idea of “collaborating with university students and professional college students and working as a bigger team.” But partly due to lack of preparation on my end, we could not have other committee members agree on the plan. We would like to keep working to solve this problem.

[Much-Needed Spotlight onto Junior High School Girls Football]
Women’s football has had a problem which is that the number of registered players drastically decreases in the junior high school generation. So since October 2012, we had had numerous discussions with the football department director of the Osaka City Junior High School Physical Culture Association, and we took two measures to prevent those girls from going away from football.

One of them was utilising “JFA-KIRIN Ladies/Girls Soccer Festival” held on 3 August 2013 at J-GREEN Sakai. Before the event we talked to the board of educations in the Cities of Osaka and Sakai and gave out the total of 96,000 flyers at 515 kindergartens, elementary schools and junior high schools to advertise this event. This worked so well that the 21% of 789 applicants, which were 165, were junior high school girls.

The other was promoting the idea of creating a girls soccer club team at junior high schools in our prefecture. I asked schools to look into many available options from having one team at one school to having a joint team by two or more schools. Because of that effort, this year the football association in the city of Moriguchi started a girls team. It’s a little different from what we envisioned at first, but schools started working together in terms of securing enough coaches and practice facilities. As the women’s committee, we will have more tournaments where joint teams can participate and we will create more opportunities for junior high school girls to keep playing football.