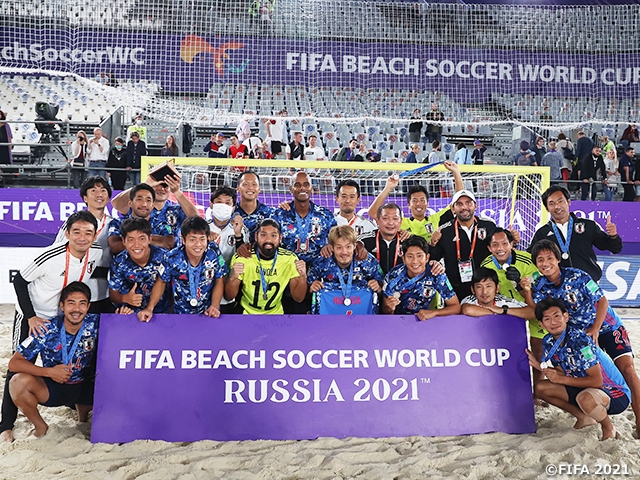 The Japan Beach Soccer National Team finished as the runners-up in the FIFA Beach Soccer World Cup Russia 2021™ (8/19 - 29). Here we will share the interview conducted with AKAGUMA Takuya (Lazo Apego Kitakyusyu), OKUYAMA Masanori (Loewe Yokohama), and OBA Takaaki (Loewe Yokohama), where we asked them about the strategies that were effective in the tournament.

――In terms of the team’s strategy, is there any specific match or play that left a strong impression in this tournament?

OKUYAMA I feel like I was able to play the way I wanted in our match against Senegal. The players in the flank were able to keep their positions high, so there were many situations where we were able to deliver short passes to the pivot. The scene where I received a pass from MOREIRA Ozu to score an over-head shot was exactly from that shape, and it was something we had been working on from our training sessions. 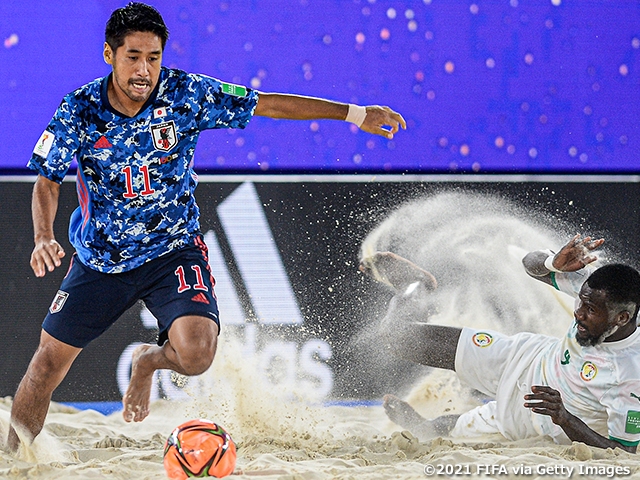 AKAGUMA It has to be the first goal against Russia in the final. Coach TABATA Teruki had analysed how our opponent was going to set their wall at kick-off and gave us instructions on how to respond to it. His advise helped us score that goal.

OBA Mine also comes from the final, but I was impressed by the fact that our defensive tactic that we never tried before actually helped us concede less goals. There are three main patterns of defensive tactics in beach soccer; rotation, box, and 2-1-1, but in the match against Russia, we played in a diamond shape like a 1-2-1. Each field player positioned themselves in between the opponents and as soon as the first player applied pressure to the ball, the other three adjusted their positions accordingly. It allowed us to apply pressure to the opponents at all times and induce mistakes. It sounded like a risky tactic but turned out to be very effective at the final. 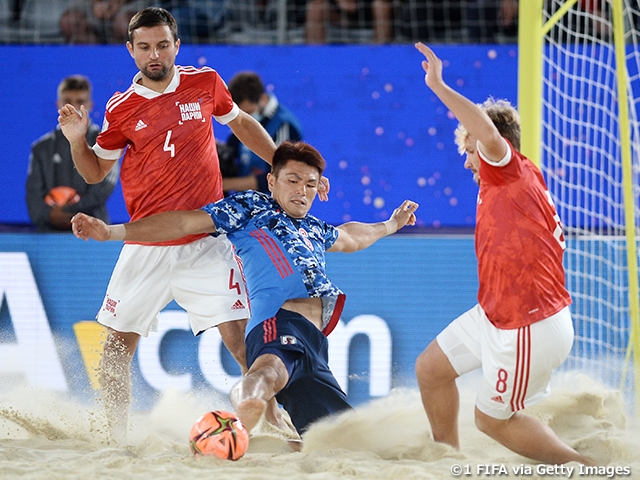 ――Was there an opponent you especially struggled with?

OKUYAMA Russia at the group stage. Their goalkeeper would be involved in constructing their offence, so we were forced to be in the defensive end for a long time, which drained our energy by the time we had possession of the ball. It was great that we were able to overcome that issue at the final.

AKAGUMA I also struggled against Russia at the group stage. They kept moving the ball and focused their defence in the middle, which made it tough for me to receive the ball.

OBA I actually had a difficult time playing against USA. Every time we passed the ball to our pivot, they persistently applied numbers to win the ball, which made it hard for us to use our pivot and ala. Coach Tabata made a tactical change to connect the ball from the goalkeeper to the ala before sending the ball to the pivot, which allowed us to exploit the gap created by the opponents. 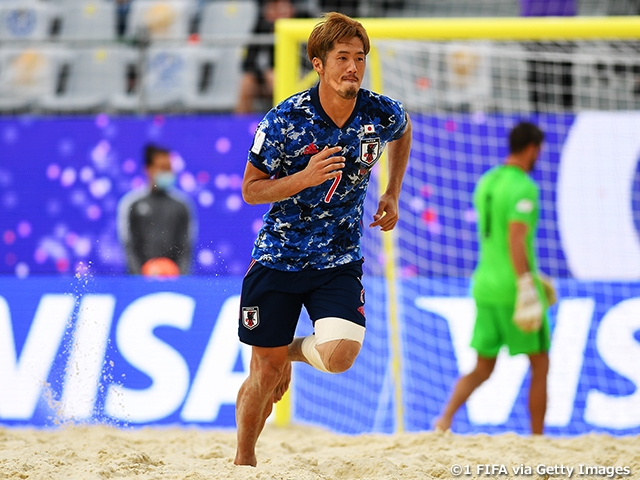 ――If you can chose one person, who would be the team MVP?

OKUYAMA To me, the team MVP goes to our manager, Mr. IMAI Yuki. He made tireless efforts to keep the players stress-free, despite the influence of the ongoing pandemic. I cannot thank him enough. If I had to choose one player, it would be Oba. He always led the team by example, balanced the team when the match picked up its pace, and scored goals when it mattered the most. His presence was huge for the team.

AKAGUMA I think it goes to Oba, too. He was always on the pitch, and despite being fatigued more than anybody, he scored the decisive goal against Tahiti to save the team. I have nothing but respect for him.

OBA Through this tournament, I came to realise the significance of coach Tabata. He played with me as a player in the previous tournament, but now that he is in a coaching role, he mentioned “I can do the things I couldn’t do as a player.” Through his enthusiastic, yet calm approach, he united the team as one. From the players, I would name Akaguma as the MVP. He scored so many goals that helped the team and won the bronze scorer award, so I truly respect him.