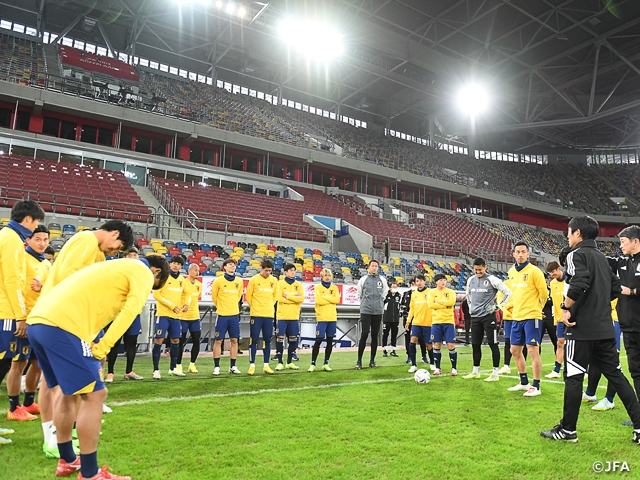 On Monday 26 September, the SAMURAI BLUE (Japan National Team), who are currently touring Germany ahead of the FIFA World Cup Qatar 2022™, held an official training session before their second match of the KIRIN CHALLENGE CUP 2022 against the Ecuador National Team. At the press conference held at the match venue, Dusseldorf Arena, coach MORIYASU Hajime shared his aspirations, “This is a crucial match for us. We will strive for victory and give our utmost effort to showcase a solid performance.”

For Japan, this will be their last match before finalising their roster for the FIFA World Cup Qatar 2022™ in November, making this a very important opportunity to evaluate the players, build on their strategy, and check the current state of the team.

At the press conference, coach Moriyasu shared his intention to rotate the entire line-up from their match against the USA on Friday 23, showing his commitment to adding depth to the squad and improving the team’s overall strength by giving more players opportunities to play. 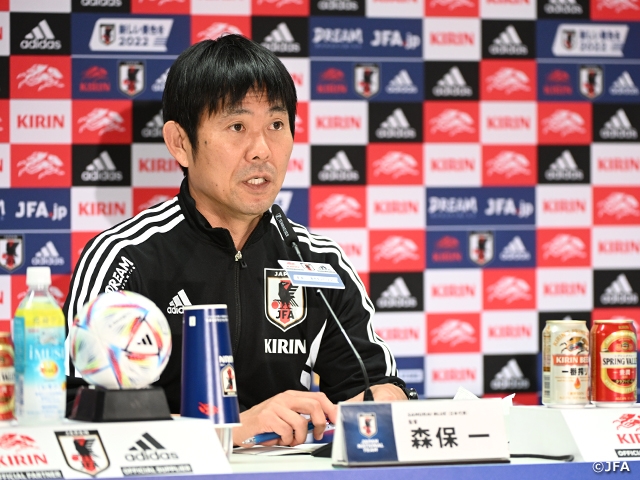 “I don't think we can win by doing the same things we have done in the last six tournaments. We need to be able to function and compete regardless of who is on the pitch,” said the coach, as he made it clear that their goal was to advance through the round of 16 for the first time in the team’s history.

TANIGUCHI Shogo (Kawasaki Frontale) commented, “We need to make our individual presence felt while also making conscious efforts to build on what we have worked over the years for the World Cup.” 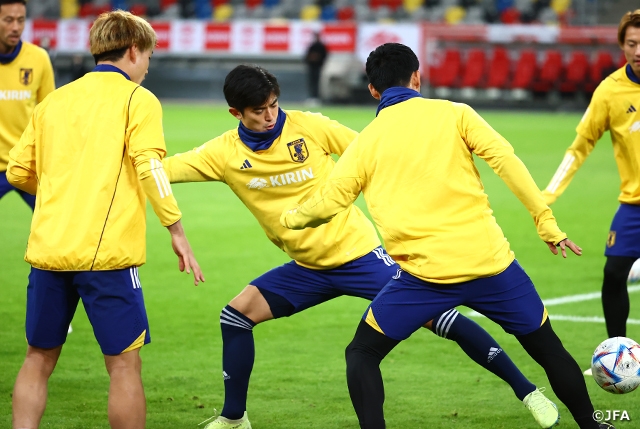 Veteran midfielder HARAGUCHI Genki (1.FC Union Berlin), who played in the 2018 FIFA World Cup Russia™, shared his take on the match, “We are getting a pretty clear understanding of what we are going to do.” MINAMINO Takumi (AS Monaco) also reflected on the team’s situation following the match against the USA, “I think we're getting better as a team.”

Their opponent, Ecuador, finished fourth in the CONMEBOL South American qualifiers, behind Brazil, Argentina and Uruguay. They showed tremendous competitiveness to draw against Brazil and Argentina at home. Most recently, they have drawn 0-0 with Saudi Arabia in a training match, and are scheduled to play Qatar, Netherlands and Senegal in the group stage of the World Cup.

13 out of the 27 players selected for this tour currently play for clubs in Europe, including Piero HINCAPIE who plays for Bayer Leverkusen, and a trio of young players; Pervis ESTUPINAN, Moises CAICEDO and Jeremy SARMIENTO, who of whom are teammates of MITOMA Kaoru at Brighton & Hove Albion FC. The presence of veteran players such as Enner VALENCIA (Fenerbahce) and Alexander DOMINGUEZ (LDU Quito) are also felt in the key positions.

Ecuador's FIFA ranking is 44th compared to Japan's 24th. Japan's overall record against Ecuador is two wins and one draw.

On this day, the SAMURAI BLUE held an official training session at Dusseldorf Arena in the afternoon to go over their tactics.

During the first 15 minutes of the training session, in which the session was opened to the media, the players were seen going through their warmup routines to loosen their bodies before engaging in passing and possession drills, while the goalkeepers went through their own drills.

Following the training session, Minamino shared his aspiration for the match, “I have a clear image of how we want to attack tomorrow. I will do my best to score goals that will contribute to the team’s victory.”

The match between the SAMURAI BLUE and the Ecuador National Team is scheduled to kick-off at 13:55 local time (20:55 Japan time) on Tuesday 27 September.