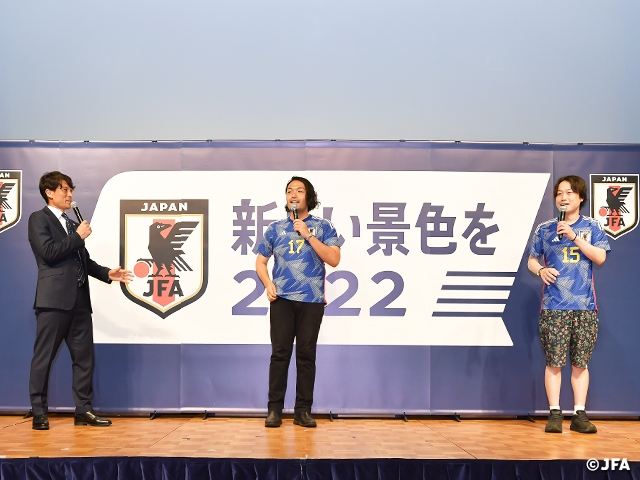 The SAMURAI BLUE will compete in the FIFA World Cup Qatar 2022™ starting in November and with this being their seventh consecutive appearance in the tournament, they are expected to take a new step forward. The project is titled “Atarashii Keshikiwo (New Scenery)” to encourage Japan to reach the top eight or higher, which is a feat Japan has never achieved before. This project hopes to bring together the strengths of the whole country to give a boost to the national team.

The project offers a wide range of activities. In conjunction with the recently announced ORIGAMI concept for the national team's new jerseys, origami message cards will be handed to the players just before the tournament, allowing football families from all over Japan to write words of support for the national team. In addition to the photos and videos collected through SNS, Japan National Team's official bus “JFA's DREAM” will travel around Japan to collect the origami cards with messages to support the team.

At the press conference, President Tashima said, “What we need most is your support from all over Japan. Starting with today, we would like to raise the momentum in every corner of our country.” Mr. Miyamoto, who participated in the 2002 FIFA World Cup Korea/Japan™, recalled the time when he himself received support from the fans as a player, saying, “I would like you to send your thoughts and wishes to the players.” 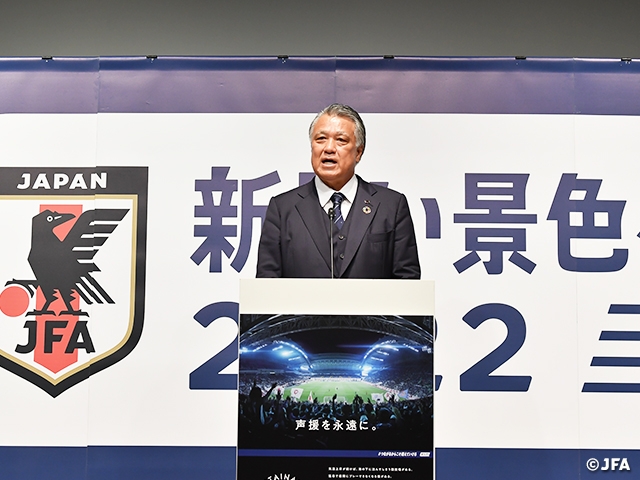 Public viewing is scheduled to take place during the team's tour to Germany in September, and Mr. MORIYAMA Shintaro and Mr. LILY of the comedian duo Mitorizu, who will participate in the project, also made their appearance in the press conference, as they each commented, “We would like Japan to be coloured in SAMURAI BLUE.” (Mr. Moriyama), “I want to see the view where Japan is at the top of the world.” 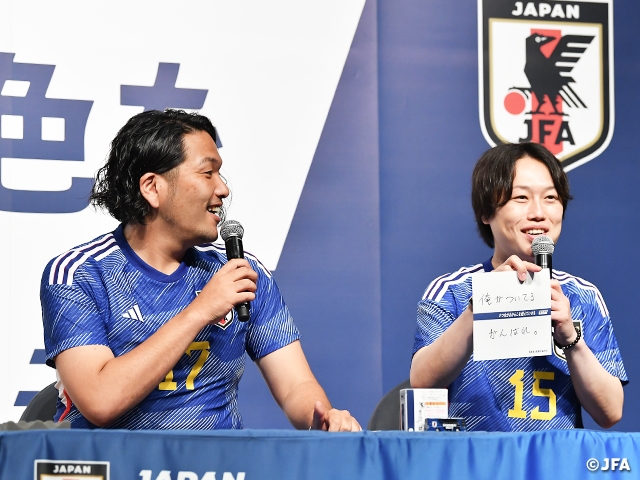 After the press conference, a departure ceremony was held for the "JFA's DREAM" bus, marking the start of the Atarashii Keshikiwo project. 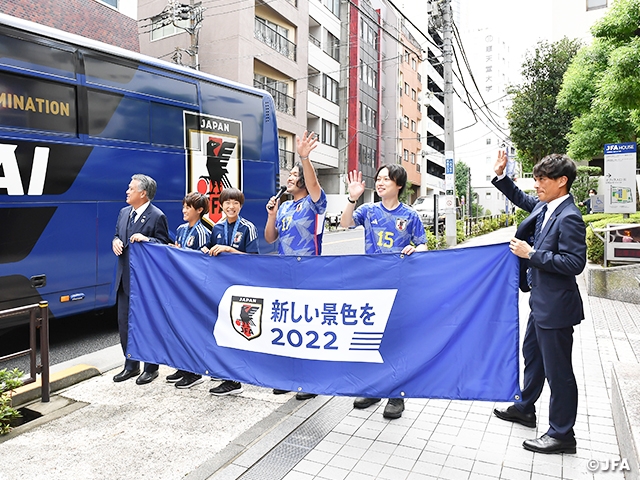 TASHIMA Kohzo, JFA President
Head Coach MORIYASU Hajime and his players' determination for the FIFA World Cup Qatar 2022™ is growing stronger because of the challenges they faced in the qualifiers. We are seriously looking forward to reaching the best eight, which is a height that we have never reached before. We are honoured to be competing against three teams who have seen a landscape we have not yet seen, but I am confident that our team will go into the tournament with nothing to fear. What we need most is your support from all over Japan. Starting with today, we would like to raise the momentum in every corner of our country, so we will support the entire football community and strive for victory at the World Cup.

MIYAMOTO Tsuneyasu, JFA Executive Committee
At the 2002 FIFA World Cup Korea/Japan™, everyone waved to us along our way to the stadium and many people came to the station to greet us while we were traveling on the bullet train, which really inspired me to do well in the tournament. It may be difficult to be on site to support the team for this World Cup, but we hope you will send your thoughts and wishes to the team. I am sure it will empower the players and give them more motivation to do well on the pitch.

Mr. MORIYAMA Shintaro
Expectations for the FIFA World Cup™ are growing, and we want people who don't know much about football to be interested in the sport and would like Japan to be coloured in SAMURAI BLUE. We want more people to know the joy of supporting the Japan National Team. As I wrote in my origami message card, I want the Japan National Team to surprise the world.

Mr. LILY
I have played football since primary school and before my last game in high school, our team manager said to me, in tears, “Thank you for everything.” At that moment, I felt glad that I had worked so hard playing football, and this project brought back those memories for me. I really want the national team to win, and show us the view of being at the top of the world.