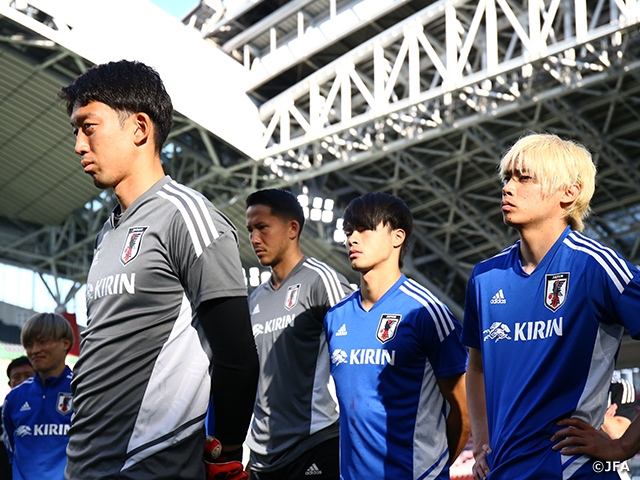 The SAMURAI BLUE (Japan National Team) held an official training session at Noevir Stadium Kobe (Hyogo) on Thursday 9 June, one day before their first match of KIRIN CUP SOCCER 2022 against the Ghana National Team. At the official press conference held on the same day, Head Coach MORIYASU Hajime expressed his aspirations for the match, saying: “We will be competing for the title. We will try to build the team while striving for victory.”

Japan, who are in the midst of a four-match series ahead of the FIFA World Cup Qatar 2022™ in November, will now head to the KIRIN CUP SOCCER, which will be held for the first time in six years, following matches against Paraguay (4-1) and Brazil (0-1) in the KIRIN CHALLENGE CUP 2022.

After seeing his side finish the first half of the four-match series with a win and a loss, coach Moriyasu said the team had “played the last two matches in good form” and that he was able to check their performances both at the team and individual level.

When asked about the impression of their next opponent, Ghana, the coach mentioned, “a team with high individual skills who are also capable of taking a powerful approach to score goals.” He then addressed the team’s lack of offence in their match against Brazil, where Japan took only four shots, saying, “I want the players to try to take more shots against Ghana.”

Coach Moriyasu also said that he would like to "make changes to the line-up from the Brazil match," suggesting that he may try out new combinations with a different starting line-up from the last two matches. 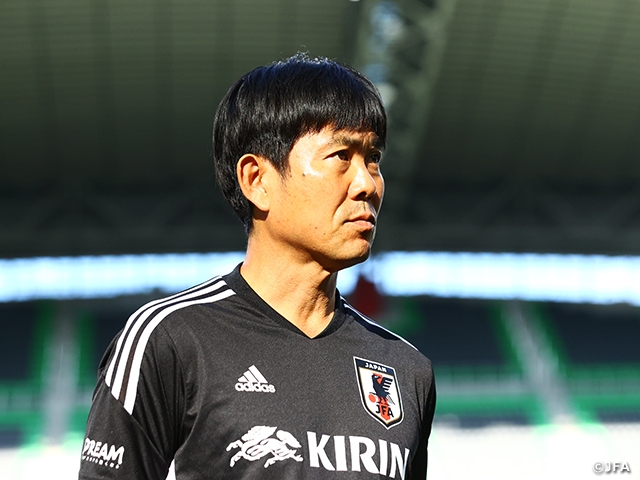 Ghana, who have won the Africa Cup of Nations four times, were eliminated from the group stage for the first time in eight tournaments at the tournament held in January this year, but they qualified for their fourth World Cup after eliminating Nigeria in the final round in late March.

The team is currently working to strengthen its squad for the World Cup, where they will play Portugal, Korea Republic, and Uruguay in the group stage. Their most recent match was on 5 June, when they drew 1-1 away to Central Africa in the Africa Cup of Nations 2023 qualifier.

Ghana National Team Head Coach NANA OTTO ADDO revealed that they were unable to call up some of their key players due to injury but added: “There is not much time before the World Cup. Participation in this tournament is part of the preparation. It will be tough, but we want to play a good match.”

The two sides have not met since the KIRIN CHALLENGE CUP in May 2018, which Ghana won 2-0, while Japan holds an overall record of four wins and three losses. In the latest FIFA rankings, Ghana is ranked 60th, compared to Japan's 23rd.

At the official training session, which took place at Noevir Stadium Kobe in the evening, YOSHIDA Maya (UC Sampdoria) was seen leading the team through the warmups, as the players went through light jogs and possession drills before the session went behind closed doors.

UEDA Ayase (Kashima Antlers), who currently leads the scoring charts in the J.League with 10 goals this season, said: “I want to prepare well so that I can give 100% when I am given the opportunity.”

The KIRIN CUP SOCCER 2022 will kick-off on Friday 10 June, with Chile and Tunisia National Team playing the first match (kick-off 15:15) at Noevir Stadium Kobe, followed by Japan and Ghana National Team in the second match (kick-off 18:55). The winners of these matches will move on to the final and the losers to the third-place match on Tuesday 14 at Panasonic Stadium Suita (Osaka). 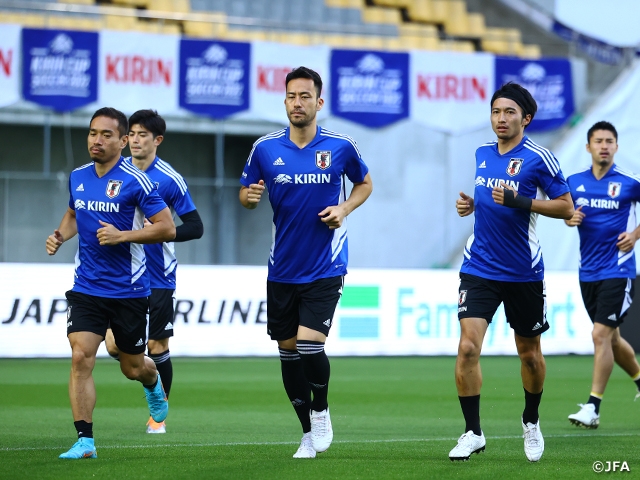