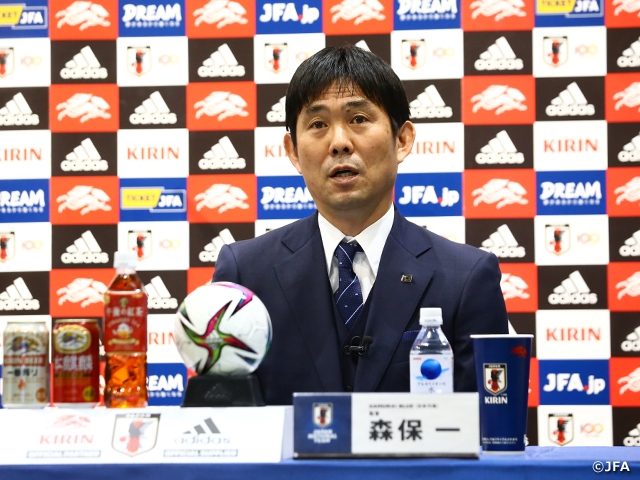 On Thursday 18 March, coach MORIYASU Hajime of the SAMURAI BLUE (Japan National Team) announced the team roster ahead of the international friendly match against Korea Republic National Team (3/25 @Nissan Stadium), and the second round of the FIFA World Cup Qatar 2022™ Asian qualification match against the Mongolia National Team (3/30 @Fukuda Denshi Arena). The 23-man roster featured nine players belonging to clubs overseas, while eight players got their first call-up to the SAMURAI BLUE.

For NISHIKAWA Shusaku (Urawa Red Diamonds), this was his first call-up since November 2017, while MATSUBARA Ken (Yokohama F. Marinos) returned to the squad since November 2014. Out of the 14 players belonging to the J.League, 10 players were selected for the first time under the Moriyasu-regime.

Regarding his selection, coach Moriyasu mentioned that he also had to consider the squad for the U-24 Japan National Team’s friendly match against Argentina, which will also take place around the same date, “I want the Tokyo Olympics generation to gain experience in the U-24 match against Argentina. By facing a strong opponent like Argentina, the players will be given an opportunity to improve their individual level, which would ultimately help raise the overall level of the Japan National Team.”

When asked about the newly selected players, the coach shared his assessment, “They each have something special and a weapon to create opportunities. They are also capable of working as a team and should provide us with more options in our matches against Korea Republic and Mongolia.” 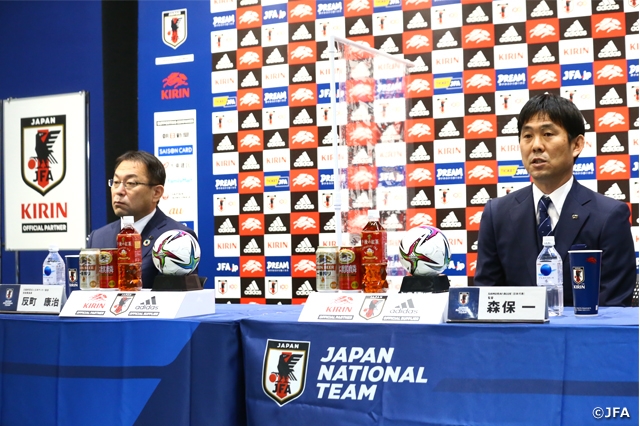 This will be the first time the SAMURAI BLUE will face Korea Republic since they faced them at the EAFF E-1 Football Championship in December 2019, which featured a squad consisting mainly players from the J.League. This will be the first time the two sides will play in a friendly match since 2011. As for the Mongolia National Team, this will be the first encounter for the two sides since Japan won 6-0 at the World Cup qualifiers played at Saitama in October 2019. This match was supposed to be the second leg played at Mongolia, but due to the effects of COVID-19, the second leg will also be played in Japan.

Ahead of the two matches, coach Moriyasu mentioned, “We will be playing Korea Republic and Mongolia, but we must take it one match at a time and prepare ourselves in the best way possible for each match.” With the team facing their long-time rival, the coach continued to mention, “Many people consider the match between Korea Republic and Japan as a special match, so we will prepare with all our souls and strive to deliver a victory that can make all of our supporters happy.”

With the matches scheduled during the ongoing pandemic, protocols with strict epidemic prevention measures will be prepared in consultation with the Japanese government. Teams will be kept in a “Bubble” to avoid outside contact, limiting transportation to their hotel, training sites, and the match venue. Players traveling from overseas, and the opponent team will be tested every day from the day of arrival until the match day, and they are allowed to train or play in the match only if they test negative. All staffs and players will be separated from the general public at their hotel. Japan National Team’s training camp will be held by completely separating the floor, dining venue, transportation, and locker rooms between the players traveling from overseas and the domestic players.

JFA Technical Director SORIMACHI Yasuharu commented, “The two matches will be held during the ongoing pandemic. We will prepare ourselves in the best way possible to make the most of this opportunity.” 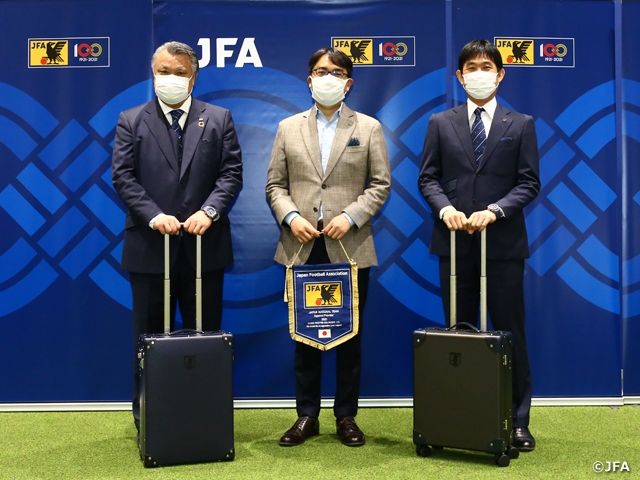 Coach MORIYASU Hajime, SAMURAI BLUE (Japan National Team)
We feel fortunate to be given this opportunity to play. I would like to thank all the people who are fighting the virus at the frontline and everyone who has contributed to creating the environment for this match. Many people are having a difficult time with the various restrictions caused by the ongoing pandemic, so it is important that we do not take for granted of the given opportunity. We will strive to showcase a performance that can give courage, energy, and perseverance to the Japanese people.

We consider the Japan National Team and the U-24 Japan National Team as one large group of “1 team 2 category.” The senior team must showcase a strong performance despite the current circumstance, while the Tokyo Olympics generation must focus on improving their individual level. The players making their first call-up are selected for their high performance at the J.League. Although they might lack experience at the international level, I hope they can make the most of this opportunity to improve themselves, become an inspiration to their teammates at their respective clubs, and help stimulate the J.League. As for the experienced players, I value not only their recent performance at their clubs, but their consistency over the years, making them a more reliable source for the team. With the past, present, and future in mind, I will try to incorporate the best options for our team with a comprehensive and neutral perspective.

SORIMACHI Yasuharu, JFA Technical Director
There are players who missed the squad due to injury or the effect of the ongoing pandemic, but we will continue to select the best possible squad to fight through these two matches. The match against our Asian rival, Korea Republic, will be a great test match for us to see where we currently stand, so we hope to make the most of the opportunity ahead of our future competitions. The World Cup qualification match against Mongolia is a crucial match, and we must play to win the match. It is important that we showcase a strong performance from the beginning to the end.