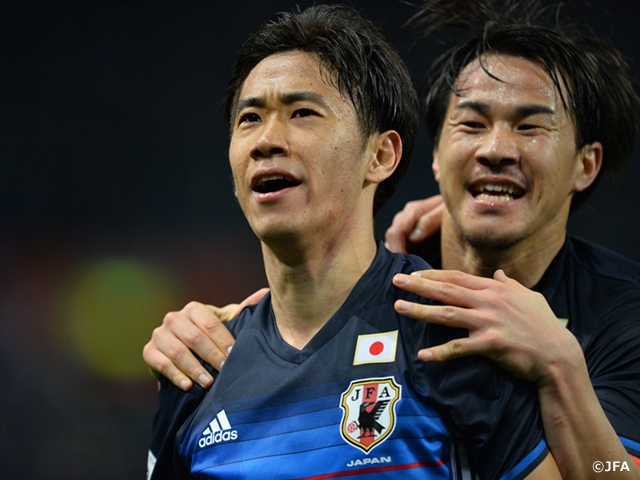 As a result, SAMURAI BLUE, who had already booked a place in the final qualifying round, finished the Qualifiers Round 2 with seven wins and one draw, earning 22 points and keeping a clean sheet in every single game.

Japan changed six players in the starting line-up from the game against Afghanistan. The formation was 4-3-3 with Kagawa and the forward HONDA Keisuke (AC Milan).

The team passed the ball around rhythmically from the beginning to look for swift attacks, creating numerous goal-scoring opportunities and earning corner kicks.

The first goal came after 17 minutes. Kagawa, who received a left corner kick from the forward USAMI Takashi (Gamba Osaka), sent a sharp cross to the area in front of the goal. Although the opponent’s goalkeeper cleared the shot, it hit the defender Hamdi AL MASSRI accidentally to score an own goal.

Japan continued to attack. The forward OKAZAKI Shinji (Leicester City Football Club) looked for a goal with an over-the-head shot in the 21st minute, and the defender SAKAI Gotoku (Hamburger Sport-Verein), who received the ball after Honda and Okazaki passed it between each other, took a shot with his left foot in the 26th minute. Although Usami took a long-distance shot in the 32nd minute and Kagawa in the 43rd minute, Japan just could not find the back of the net.

Syria, on the other hand, was keen on attacking back with a fast-paced mix of attack and defence, and looked for goal-scoring opportunities. After 35 minutes, Mouaiad AL AJJAN reacted to a right corner kick, and during additional time, the defender Hamdi AL MASSRI fired a shot from a left corner kick, but both went wide.

Japan started to attack once more from the beginning of the second half, while Syria were looking for counter-attacks. In the 58th minute, the midfielder YAMAGUCHI Hotaru (Hannover 96) left the pitch due to an injury he picked up through contact with an opponent. The midfielder HARAGUCHI Genki (Hertha BSC Berlin) came off the bench as a defensive midfielder.

After 61 minutes, Honda went close with a header, which unfortunately hit the left goalpost, while the midfielder Mahmoud ALMAWAS’s long-distance shot hit the post, and three minutes later, the forward Omar KHARBIN fired another long-distance shot.

In the 66th minute, Japan scored the long-awaited second goal. Honda, who received the ball from the midfielder HASEBE Makoto (Eintracht Frankfurt), got through the opponent with a floating pass and sent it to Kagawa. Kagawa received the ball on his chest, twisting his body to strike a superb shot with his left foot.

Japan pressured the opponent’s goal with consecutive shots from Usami and Okazaki, but the goalkeeper saved them.

After 83 minutes, Syria attacked back. The forward Abdulrazak AL HUSEIN, who came off the bench, fired a goal through a counter-attack. Then the midfielder Nadim SABAG also took a shot, followed by another attempt from Al Husein three minutes later and AL AJJAN in the 89th minute. The goalkeeper NISHIKAWA Shusaku (Urawa Reds) made some excellent saves.

After 86 minutes, Honda received a cross from Kagawa and headed home to build a three-goal lead. In the 90th minute, Kagawa reacted well to a loose ball off his own shot, and slotted it into the goal. During injury time, Haraguchi ran to a cross from the defender NAGATOMO Yuto (FC Internazionale Milano) on the left, and scored Japan’s fifth goal from a header.

Despite the defeat, Syria have earned 18 points, finishing in the top four of the second-placed teams. Syria got through to the next stage.

After the game, the team attended a ceremony for Okazaki, who won his 100th cap for Japan. The coach Vahid HALILHODZIC presented him with a special kit with the number 100 on the back. Okazaki gave a speech, saying with a smile: "I won 100 caps thanks to everyone who has supported me. I will never forget my appreciation and will play hard. I’m 29 years old and still ambitious. I’ll try harder." The ground was filled with warm applause.

In the final qualifying round from September, 12 countries will be divided in to two groups of six teams to play home and away games. The top two teams of each group will book a place in the championship, while the winner between the teams in third place will play for the last ticket against the team in forth place from the North, Central American and Caribbean section.

The draw for the final qualifiers will be on Tuesday 12 April. Apart from Japan and Syria, Saudi Arabia, Australia, Qatar, Iran, Thailand, Korea Republic, Uzbekistan, China PR, United Arab Emirates, and Iraq got through to the final round.

Vahid HALILHODZIC, Coach of SAMURAI BLUE (Japan National Team)
The players earned a beautiful victory. It was a great night. Although we did create big goal-scoring opportunities, we came under pressure from the opponent several times for the first time in the Qualifiers Round 2. In the 25 to 30th minutes of the first half, the players performed excellently, with some spectacular passages of play, but the opponent picked up their pace again while we were trying to find the back of the net. The players focused too much on the high-level performance, which was not good for systematic plays. The opponent noticed that. There is still room to improve in every aspect – tactics, mentality, and physical strength. I’d like to improve the scoring ability even more.

FW  HONDA Keisuke (AC Milan)
It was great to win the game, but at the same time we found many areas to work on. I think I could have scored goals more easily and assisted my teammates to take shots more. Both before and after we scored the second goal, I found many problems in attack and defence. Although we need to improve how we win and how we score a goal, it was good to find these problems through a win.

GK NISHIKAWA Shusaku (Urawa Reds)
We could keep a clean sheet not only because of me, but also because of the team’s effort. I’d like to play harder to perform even better, and contribute to the team.

DF  YOSHIDA Maya (Southampton FC)
We should have scored more in the first half, and managed risks in attack. I’d like to discuss our problems among the team in preparation for the final qualifiers, so that we can improve the team even more.

FAJER EBRAHIM, Coach (Syria National Team)
It may not be a surprise for Japan to get through the Qualifiers Round 2, but it’s excellent for us. Although we had to let Japan dominate in the first half, we attacked back in the second half. Having said that, we couldn’t score with our goal-scoring opportunities, and let Japan score three times from our mistakes. We’d like to improve ourselves for the future. 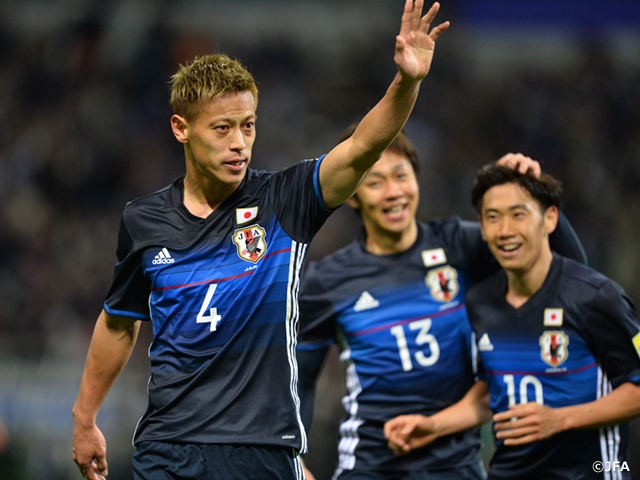