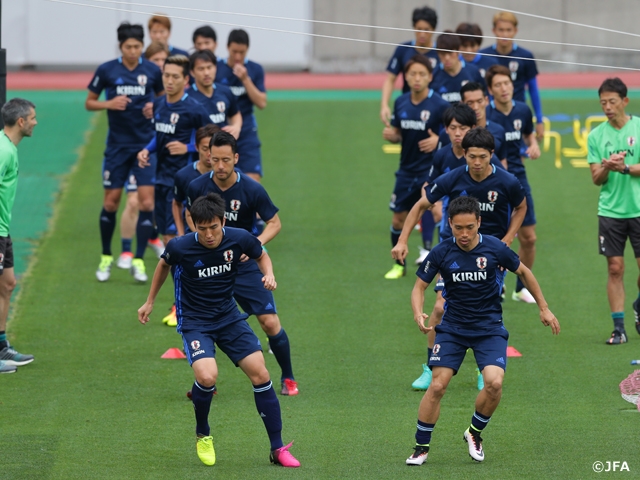 SAMURAI BLUE (Japan National Team) had their final tune-up session in Osaka on Monday 6 June with just a day to go until the KIRIN CUP SOCCER 2016 final against Bosnia and Herzegovina.

The squad spent time going through moves and tactics with the only first 15 minutes opened to media. Meanwhile, midfielder KAGAWA Shinji (Borussia Dortmund) and forward HONDA Keisuke (AC Milan) did not show up on the pitch as Japan coach Vahid HALILHODZIC indicated he would not play them.

Forward USAMI Takashi (Gamba Osaka), who scored Japan's sixth goal of the Bulgaria match after coming off the bench, says, "we can't keep relying on them. The players who are on the pitch are supposed to come through." He is envisioning how he will play at the Bosnia match, "If we can get pacey with collective moves, there will be quite a bit of situations where we can break through." 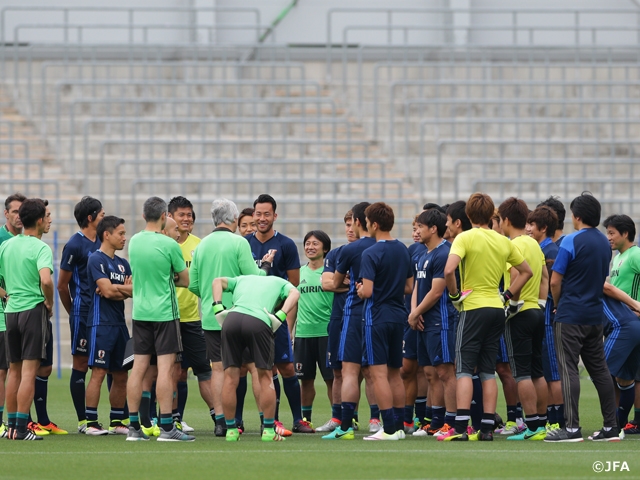 The KIRIN CUP is being held for the first time in five years, installing a knockout system among four countries. While Japan cruised to a 7-2 win over Bulgaria in the first match on Friday 3, Bosnia and Herzegovina edged Denmark with a 4-3 penalty win after coming back from a two-goal deficit.

Japan's past record against Bosnia and Herzegovina is one win and one draw after a 2-2 friendly draw in 2006 in Germany and a 3-0 victory in the Kirin Challenge Cup 2008.

Bosnia and Herzegovina further improved later on as they made the first World Cup berth at the 2014 Brazil despite their elimination in the 2010 World Cup qualifiers. They missed out of the EURO 2016, which gets underway this month, with a close loss to Ireland in the EURO playoff, but they beat Switzerland in away friendly last March. They stand at 20th in the FIFA Ranking (Japan at 53rd).

Under former Yugoslavia midfielder coach Mehmed BAZDAREVIC, Bosnia and Herzegovina are building up the team for the World Cup Qualifiers starting this September.

"We should initiate attacking and try to beat them to the punch," says forward OKAZAKI Shinji (Leicester City FC), who scored the opening goal in the Bulgaria match for his 49th international goals. "It was a season where a lot of people supported me. To get results next season, I want to finish in style at the end."

For Usami, the upcoming match is to take place at his club's home Suita City Stadium. "Fans at the stands change in the national team matches, so I'm not sure if I can feel the same home-like atmosphere." But he adds, "I want to keep as calm as possible and show what I have."

In the meanwhile, Denmark and Bulgaria had an official training session at the match site in the evening of the day ahead of the third-place match.

The match between Denmark and Bulgaria is scheduled to kick off at 16:00 on Tuesday 7, while Japan's match against Bosnia and Herzegovina is set to kick off at 19:30 on the same day. 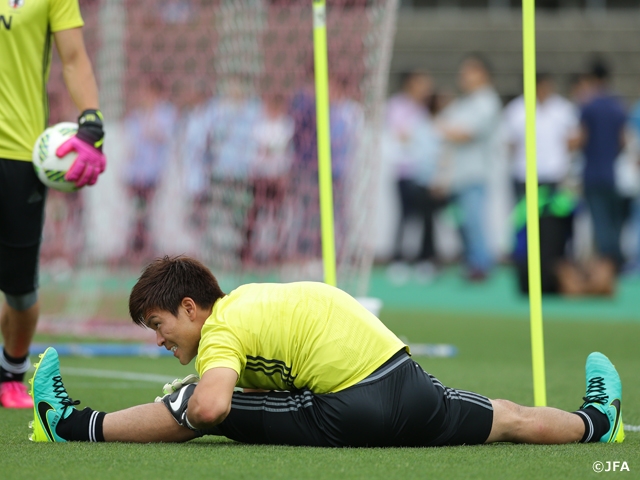 FW #9  OKAZAKI Shinji (Leicester City Football Club/England)
The opponents have a playing style of staying back, and there are some players who've got a good one on offence. But we should initiate attacking. You can break through defence by only passing the ball slowly and send it to feet. You all have got to know where to accelerate and when to get space behind defenders. I will try to keep that in mind to get it done. The next season will be a year of challenge for me to step up. To get results next season, I want to finish this season in style.

FW #11  USAMI Takashi (Gamba Osaka)
The opponents are tall, but if we can get pacey with collective moves, there will be quite a bit of situations where we can break through. (Speaking of the case where Honda and Kagawa is out) When your players change, your football also changes. Our attacking level gets higher if we get them on the pitch, but it's not good to keep relying on them. The players who are on the pitch need to discuss and get through it in some way. In the Bulgaria match, we gave up unnecessary goals, so we shouldn't concede an easy goal on defence. On offence, if we maintain the quality of that match, I think we can win it. We are going out with confidence.

GK #12  NISHIKAWA Shusaku (Urawa Reds)
We tried to share understanding of how to score a goal. We need to simulate a penalty shootout as well. With Kawashima back to the national team, I'm working out as being motivated, and I can keep a high level of aspiration by coming to the national team. Goalkeepers are required to get results. I was able to meet my goal to keep clean sheets in the World Cup Asian Qualifiers' second round. It gave me confidence, but what really matters is what happens from now on. If I can keep our opponents scoreless in the final qualifying round, I feel like I can see the world that I've never seen. To make it true, I will try to picture how to capitalise on my play for the team.

Ivaylo PETEV, Coach of Bulgaria National Team
Tomorrow we've got to show a different face from the first match. If we hadn't given up a goal just after kick-off, we would have shown battling qualities and it would have been more competitive. This time, we will try to stick to fundamentals and improve defence with concentration. We want to avoid allowing an easy goal. If we can do that, we may be getting a different result even though the opponents Denmark are a great team.

Aage HAREIDE, Coach of Denmark National Team
The second half of the first match wasn't good, but my players have been doing well except that. We will continue to play our game on both offence and defence to win the match. It's the final stage of the long season and the players got fatigue. So it depends on their condition. But the defence after giving away the ball is important in an international match. We've focused on it in training yesterday and today. We've got players who've got quality on offence as well. The best gain so far is that more players are starting to understand how to play with the team.