Halilhodzic: Our goal is to win – Afghanistan match in World Cup Asian Qualifiers Round 2 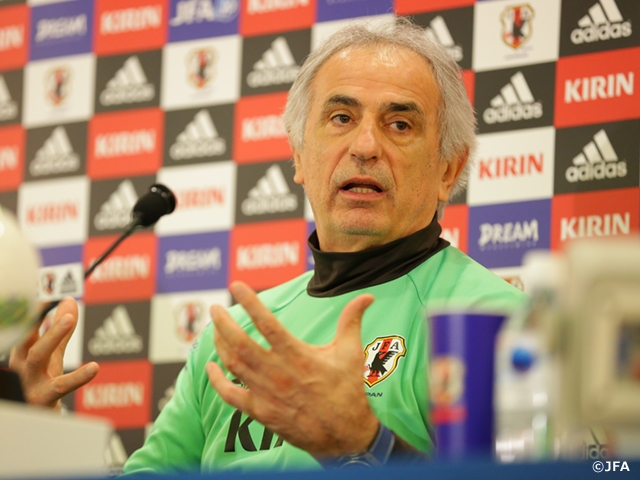 With just a day away from their seventh match of the FIFA World Cup Qualifiers Round 2 against Afghanistan, SAMURAI BLUE (Japan National Team) got final tune-up on 23 March at Saitama Stadium 2002, where the team will play the match. Japan coach Vahid HALILHODZIC said at the official press conference, "our goal is to win. We will score as many goals as we can and keep clean sheets until the end of the second qualifying round."

Group E leaders Japan have already secured the top two spot with five wins and one draw. The group winners and top four runners-up advance to the final qualifying round. If Japan win their first match of the year of 2016 against Afghanistan on 24th and Syria, standing in second by one point, lose to Cambodia, Japan seal the top spot to get through the round with one match remaining on 29th against Syria.

Afghanistan has earned six points with two wins and four losses. Their hope for the final round has been already dashed. Japan beat the Afghans 6-0 in their third Round 2 match last September, while Afghanistan invited Croatian coach Petar SEGRT last November. Under the new reign, they finished as runners-up in the SAFF South Asian Championship at the end of last year.

"With the new coach coming in, they were playing nice games in the South Asian Championship," commented Halilhodzic. "We don't want to forget the Singapore match." The Japan boss warned his men, recalling the last June's first match of the second qualifying round against Singapore at home, where his side finished 0-0 despite their relentless attacks. "We've got to focus on this match. I want my players to work hard with passion, motivation and fighting spirit," added Halilhodzic with enthusiasm. 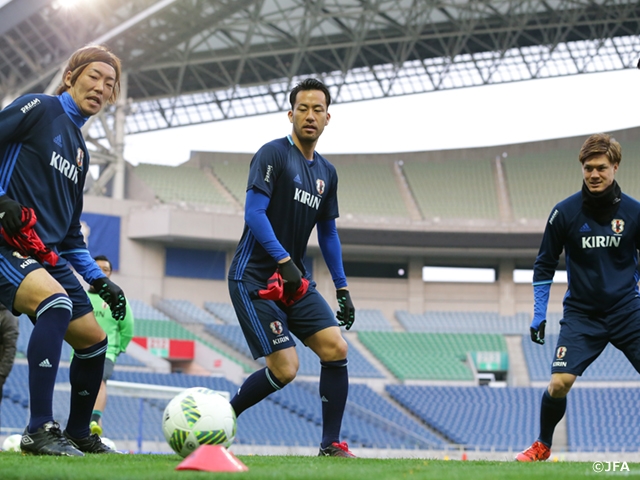 The team opened the first 15 minutes of the training to media at the stadium before going through tactics.

Halilhodzic mentioned forward HONDA Keisuke and midfielder KAGAWA Shinji will start on the bench, considering fatigue after the long trip from Europe. He also added, "I will put together the team differently. I want to see what kind of chemistry will occur with those eleven." He talked about the possibility to change his starting line-up and system.

Forward HAVENAAR Mike (ADO Den Haag), who has tallied 13 goals in the Netherland's Division1 League this year and made a comeback to the national team after a year and a half, says, "I will try to take advantage of my strength as best I can. That's the best way to prove myself. I'm desperate to get results," added Havenaar, who has a strong determination to keep the spot in the national team.

Defender MORISHIGE Masato (FC Tokyo) said, "The opponents are better than before under the previous coach, I heard. I myself want to win with a clean sheet. We will go out to get such a result."

The match between Japan and Afghanistan will kick off at Saitama Stadium 2002 on 24th at 19:30.

Vahid HALILHODZIC, Coach of SAMURAI BLUE (Japan National Team)
The goal for these two matches is to win, but we will try to score as many goals as we can and keep clean sheets until the end of the second qualifying round. I'm considering to put together the team differently, and I want to see how well it will go and what kind of chemistry will occur. Anyway, I want my players to work hard with passion, motivation and fighting spirit. We don't want to forget the Singapore match. A lot of fans will come to the stadium and we are responsible for satisfying them when they go home. I want my players to express that on the pitch and improve on offence, defence and mentality in the second phase.

MF  KASHIWAGI Yosuke (Urawa Reds)
I understand what I'm expected here in the national team, and I will try to show those plays. Whichever I start or come off the bench, I just try to let the team move with my passes. I expect I can play either of the matches, so I will get well prepared and perform for a goal with my pass.

FW  HAVENAAR Mike (ADO Den Haag)
I lacked the attitude to play 100% from training and warm-up. I felt I needed to have high aspiration and improve quality of play. At my age, this will be my last World Cup. I will hold onto it as best I can and prove myself to keep the spot in the national team. Our football is fast vertically. I will try to get space in front of goal as quickly as possible and always try to score a goal.

DF  NAGATOMO Yuto (FC Internazionale Milano)
I think the key will be how side backs can go up and attack tomorrow. The opponents may change their formation and a couple of players, but our basic way to play won't change. Battling on long balls. It's important not to sit back too much and keep the defensive line compact.

MF  KIYOTAKE Hiroshi (Hannover 96)
(Since the last meetup with the national team) It's been a long time, and I want to refresh my mind and play solid. It's the second year with coach Halilhodzic, so we want to get to a higher level and strive for the perfection. My role is different between my club and the national team, but if I can play close to forwards, I can get close to goal automatically.

GK  KAWASHIMA Eiji (Dundee United Football Club)
Working with my teammates after a while made me feel like I'm back to the Japan National Team, and it reminds me of my motivation that I want to pile up wins together with this team. It's important to show what I felt and what I got while I was away. And I will rethink about what I can do as a player to help the team win. Talking about the terror attack, I played in Belgium for five years and I used the airport very often. I'm so sad and I have no words to express how I feel.

Petar SEGRT, Coach (Afghanistan National Team)
Japan are the No.1 team in Asia, who've got a lot of players playing overseas. We are a lower ranking team and will miss two core players because of injury, but since I took on the coach role, we've played good games in the past six matches. We will do our best throughout 90 minutes and hopefully be the first team who get a goal against Japan. Japan are strong and I'm happy if we can get a point.