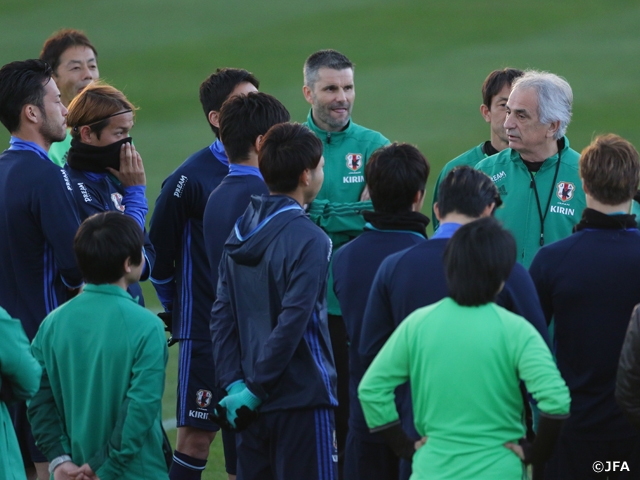 SAMURAI BLUE (Japan National Team) began their prep training in Saitama on 21 March in the run up to the FIFA World Cup Russia Asian Qualifiers Round 2 against Afghanistan on 24th and Syria on 29th.

In the second qualifying round, the top team in each group and top four second-placed teams among all eight groups will advance to the final qualifying round. The unbeaten Japan have 16 points, leading Group E with five wins and one draw, followed by one point by second-placed Syria with five wins and one loss. On the other hand, Afghanistan have earned six points with two wins and four losses (fourth place), already having zero chances of advancing to the final round. After playing seven matches, Singapore and Cambodia have tallied 10 points and no points respectively.

The 20 men assembled on the camp's opening day, while the remaining four players will join later due to their club matters, including forward HONDA Keisuke (AC Milan), midfielder KAGAWA Shinji (Borussia Dortmund) and goalkeeper KAWASHIMA Eiji (Dundee United Football Club) as well as forward HAVENAAR Mike (ADO Den Haag) who was called up for the first time under Vahid HALILHODZIC's reign.

SAMURAI BLUE went into action for the first time since last November. The Japan coach talked to the team at the beginning and the squad were unified before kicking off the training. The players loosened their body with running and stretching and worked on training in two groups.

While the players such as defender MAKINO Tomoaki (Urawa Reds), who played a J.League match on Sunday, and forward OKAZAKI Shinji (Leicester City Football Club), who travelled after his Premier League match, went through stretching exercise and trunk training, the other group played a 6-on-6 game with four small goals placed in a small-sided area. Halilhodzic himself showed how to move after receiving the ball at times.

After the team practice, the boss gave forward KANAZAKI Mu (Kashima Antlers) advice on how to improve his dribble. Then the coach helped defender YOSHIDA Maya (Southampton FC) work on passing and heading with the coach himself providing balls to Yoshida.

Midfielder HASEBE Makoto (Eintracht Frankfurt) braced himself up, saying "the last two second qualifying matches are at home, and we will try not only to get results but also to play games that make people understand what kind of football we play."

Having scored in the match on 14th for his team leading the English Premier League, Okazaki showed his enthusiasm. "We need to create as many chances as possible to take challenges. And I hope I can score goals, which everyone expects from me."

Japan take on Afghanistan on 24 and Syria on 29 March. Both matches are to be held at Saitama Stadium 2002. 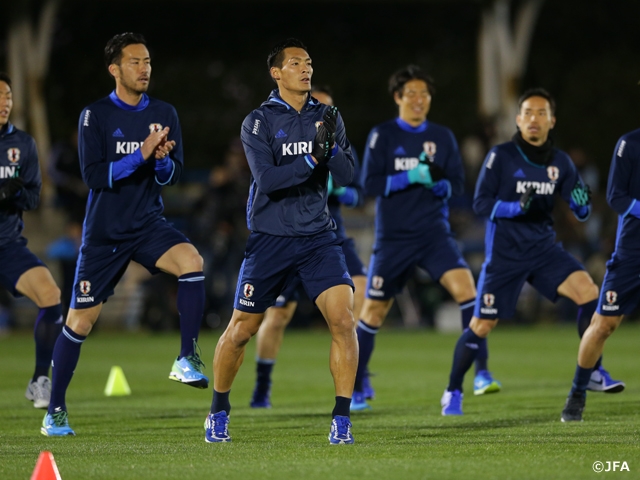 FW  KOBAYASHI Yu (Kawasaki Frontale)
I'm relaxed joining the practice. I was instructed to move right after putting down the ball, and that's what I'm good at. I was able to get into the team smoothly. I think I'm expected to show the same kind of things as I am in Frontale. Our coach told me to sprint more in 90 minutes. I need to keep up doing that work. As long as I play as a forward, I want to be hungry for goals and call on pass providers for the ball.

FW  OKAZAKI Shinji (Leicester City Football Club)
Whether it is the national team or your club, you've got to get the results in every match. These two national team matches will be important and we've got to win them. In Leicester, every player brings out his best and those have worked very well. It's like resonance. You all give it everything you've got and that fits well together so that Japan team can be a better team. I want to make the national team opportunity be a place where I can play on instinct and go all out to challenge. What I'm expected is to score goals, so I will try to get them.

MF  HASEBE Makoto (Eintracht Frankfurt)
Our coach said he is satisfied with the team for the first year, but he also said our team could improve much better. We'd like to live up to his expectations. Competition is necessary within the team, and newer players need to try to catch up with the players who've played for many years. To me, it's been 10 years with the national team. My first call-up was in the period just before the FIFA World Cup in 2006. And I was fired with strong enthusiasm and high hopes like "If I can showcase myself at this point, I may get a chance." I want to feel that way even at this age. Other players also keep it inside even if they feel the same. Our coach expects us to show it, so we can try to do it together.

DF  SAKAI Gotoku (Hamburger Sport-Verein)
I was sure I could come back to the national team if I get to play for my club, and with the solid performance, I think I was called up here in the end. It's not good to have an unstable game up and down. I'm always aware of lessening the ups and- downs. I play the right back in most cases, but I'm ready to play on the either side. Talking about the spot to win the ball, I will try to work as a team, not as an individual. 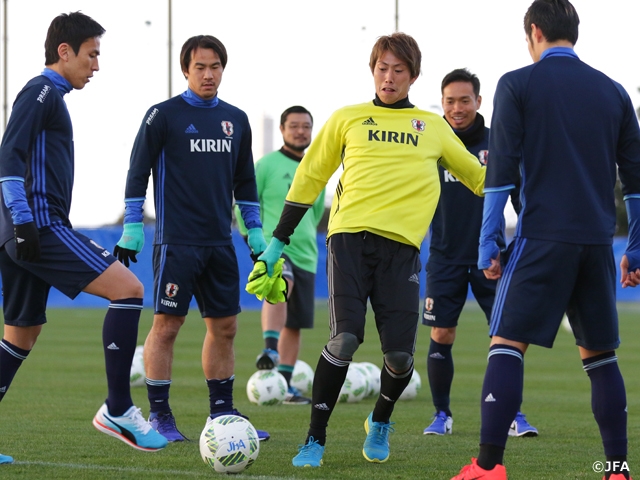