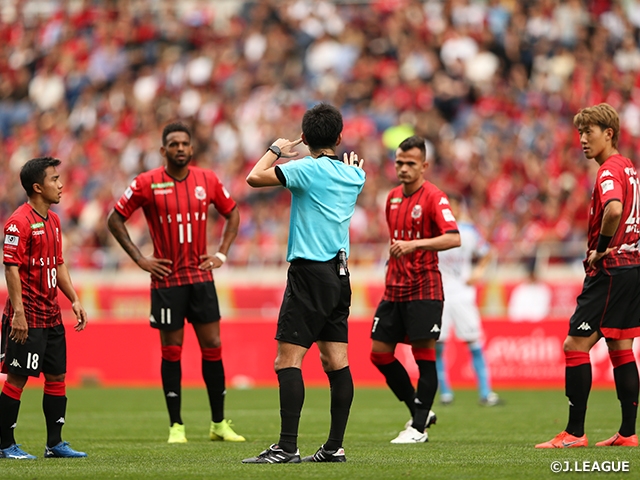 The Video assistant referee (VAR) system was officially implemented into the Laws of the Game by the International Football Association Board (IFAB) in 2018. Following the use of the system at the World Cup in Russia, top-flight leagues around the world started to adapt the system. In 2019, a total of 20 countries have utilised it in their leagues at a regular basis.

In Japan, the VAR system was tested at various competitions during 2019, including the J.League YBC Levain Cup, where VARs were used in matches beyond the quarterfinals, the J1/J2 play-offs final, and the Emperor's Cup final, which took place at the New National Stadium on New Year’s Day of 2020. It was also announced that the system will be used in all J1 matches in 2020.

The main purpose to implement the VAR system is to eliminate crucial referee mistakes that can impact the outcome of a match. However, eliminating “clear and obvious errors” does not necessarily mean to seek for the “correct decision.”

The Laws of the Game clearly states what fouls or a misconduct are and what kind of offences will result in a yellow or a red card. However, many plays taking place on the pitch are not obvious to the eyes of everyone, and it is hard to determine whether the play was a foul or a not a foul. In many cases, a single play can be judged in either way, but, the referee must make the decision in a split second to manage the match.

A crucial role of VARs is to notify the referee about a left out piece of information, in case the referee could not see the incident while making a decision on the pitch. In order to share each other’s point of view, the on-field referees and the VARs are connected through a wireless communication system. This way, the referee can immediately explain to the others his/her thought process that led them to make the particular decision.

Here’s an example from the Levain Cup final 2019 between Hokkaido Consadole Sapporo and Kawasaki Frontale. The scene came in the 29th minute, when Kawasaki’s NOBORIZATO Kyohei went down inside the penalty area. At the moment, the referee communicated with the VAR that he did not see any wrongdoing committed by the Sapporo defender and that Noborizato initiated the contact.

After repeatedly reviewing the play, the VAR confirmed that the referee did not miss out any crucial evidence and supported his decision. The most important aspect here is that, the VAR did not share its own opinion, saying “if I were you, I would make this decision.” This is a good example of the VAR system trying to eliminate “clear and obvious errors” rather than giving aid to the referees to make the “correct decision.”

The JFA Referees Committee has repeatedly held briefing sessions on the VAR system towards the media members and shared footages and conversations that took place between referees and the VAR during actual matches.

Through these briefing sessions, we were given the opportunity to learn about the tireless efforts made by the referees to keep up with the fast paced matches and their ability to make quick and accurate decisions on the pitch.

However, despite their efforts, it may be sometimes impossible to watch over every single play, such as a hand ball committed in a scramble. There are also unexpected incidents that may occur on the pitch, like Zinedine ZIDANE's (France) infamous headbutt at the 2006 World Cup final…

The VAR system can provide great support in such incidents, but the final decision will always be made by the referee. As its name suggests, the VAR will always remain as an “assistant” to the referee.

With the implementation of the VAR system, there will be many more conversations and debates made on its existence. I personally was worried that the system might make the referees less important in this game. However, I am now starting to believe that the usage of the VAR system may help heighten the respect towards the referees, if everyone can deepen their understandings on the system. I will continue doing my best to make my voice heard, so that the implementation of the VAR system can help raise more respect towards the referee’s decisions in matches where VARs are not used.