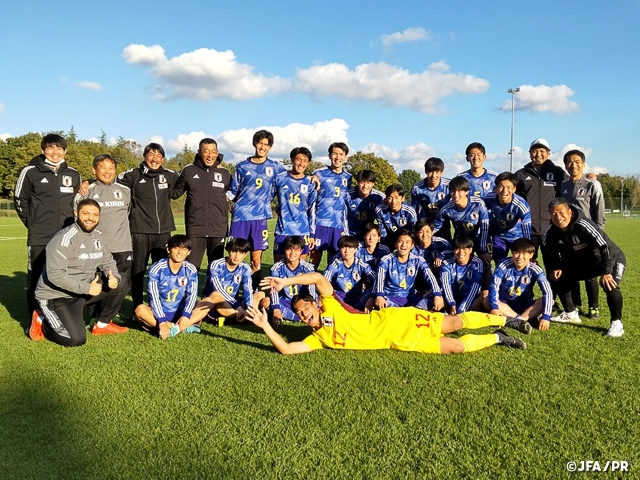 On Monday 21 November, the U-17 Japan National Team, who are participating in the International U-18 Friendly Tournament held in Croatia, played their third match against the U-18 Denmark National Team.

Still in contention for the title, Japan entered the match with plenty of enthusiasm, as they showed great defensive unity to contain the Danish offence at bay. Even when Denmark did manage to create chances in the final third, Japanese goalkeeper HAMASAKI Tomoyasu (Kawasaki Frontale U-18) was there to deny their shots to keep the clean sheet intact, as the match went into halftime scoreless.

Effectively utilising their substitutions, Japan increased their dominance in the second half, as they aggressively applied pressure to win the ball and create chances. The deadlock was broken in the 60th minute, when YUKUTOMO Toki (Ehime FC U-18) redirected the shot taken by NAGATA Kotaro (Yokohama FC) to score the opening goal.

With momentum on their side, Japan continued to press forward and scored their second goal in the 70th minute, when GOTO Keisuke (Jubilo Iwata U-18) converted the corner kick delivered by HAYAKAWA Jumpei (Urawa Red Diamonds Youth) with a header.

The Japanese players maintained their concentration until the end to keep the Danish side scoreless, winning the match 2-0. With this victory, Japan finished the tournament with a record of two wins and a loss and claimed the title on goal difference. Through this tournament, the players were given the opportunity to play in a completely away atmosphere in a foreign country, as well as developing the perseverance to bounce back from a discouraging loss.

JO Kazunori, Head Coach of U-17 Japan National Team
This was the first international tour for this age group. The pandemic has prevented these players from going on tours abroad and they have not had the opportunity to compete against strong opponents from other countries, so this has been an invaluable learning experience for them. We told the players at the beginning of this tour that they would gain valuable experience and develop as a player of the national team by winning matches.

In the first match against Croatia, we managed to dominate the ball possession, but were unable to capitalise on our chances and ended up conceding a goal from a single mistake, which allowed us to experience at first hand the difficulty of football and an intensity level that we are unable to experience in Japan. The team analysed the issues raised in the first match and made corrections using video footage before moving on to the second match. In the second match against Sweden, the players showed great aggression in both defence and offence, which resulted in a 4-1 victory. The third match was against Denmark, who were in first place with two wins, but the players were unfazed and used their strengths to fight to the end, winning the match 2-0. As a result, the team won the title with a record of two wins and a loss, and I am very proud of them.

The team's support staff, which included those responsible for analysis, physical preparation, medical assistance, and training, performed with the utmost professionalism. I am happy to see that the players have grown stronger day by day and have shown what they can do while learning the world standards through this tournament. It was truly a victory won by the whole team. I would like to thank all of these great players and staff for their hard work and dedication. I believe that greater things are yet to come for these players. It is up to them how they can make the most of the experience they have gained here and raise the standard of their daily trainings. I believe in these players' potential and that they will be able to carry Japan on their shoulders in the future.

We want to express our gratitude to all the teams and parents once more for allowing their players to take part in this tour despite the pandemic, especially at such a crucial point in the season. I sincerely appreciate it.

DF #4 SAKAIYA Keisuke (Sagan Tosu U-18)
Today was the last day of the tournament, and with the title on the line, I am happy that we were all able to come together to win and finish with the best possible result. The players born in 2005 had never travelled abroad and had little international experience, so this tour provided us with an invaluable opportunity to play against strong European sides such as Croatia, Sweden and Denmark, which will certainly help us grow as players. I was able to gain a lot of experience, but I wasn't able to get the outcomes I was hoping for, so when I get back to Japan, I'll work hard at my team to move up to the top team and try to establish myself as a stalwart for the national team.

MF #14 SUZUKI Haruto (Nagoya Grampus U-18)
With the title on the line, we were able to play with a good sense of urgency against Denmark today. This final match was the embodiment of the football we were trying to play. It was great to win 2-0 and win the tournament. As an individual, I was able to create chances with my dribbling skills, which gave me confidence that I can compete at the world level. However, I felt that I needed to improve my ability to score goals in order to become a player who can be a threat to opponents. I am grateful for the opportunity to participate in such a valuable competition, and I will continue to work hard in Japan to become a better player.

FW #13 YUKUTOMO Toki (Ehime FC U-18)
The team was motivated for this match because a win of at least 2-0 would put us in position to win the title. Denmark is a very technical team, and we were frequently being outplayed, but I am very happy that we were able to keep playing our own football and win the match. It was the first international tour for the players born in 2005 and although there were many challenges, we were blessed with excellent opponents and even better teammates, making it a great time for all of us. I think this experience is very valuable for me and for the national team of this age group, so I will try to make the most of it in my future football career. 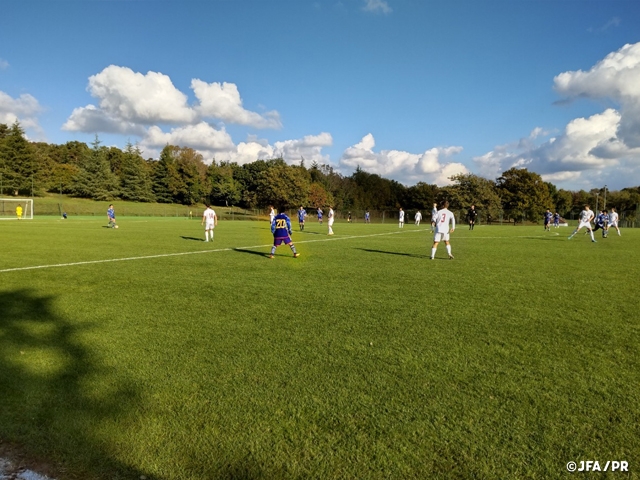