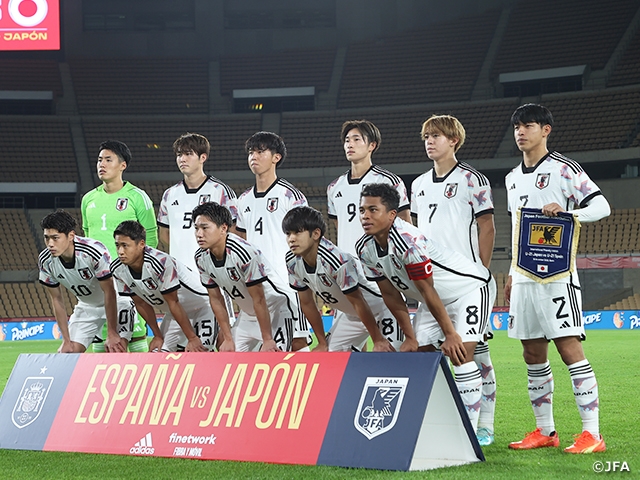 On Friday 18 November, the U-21 Japan National Team played against the U-21 Spain National Team in an international friendly match held in Sevilla, Spain, where they lost 0-2.

In the early stages of the match, the two teams, both adept at exchanging short and precise passes, engaged in a fierce battle in the midfield in attempts to seize the initiative of the match. In the 33rd minute, Saito delivered a pin-point pass through two defenders to set up a one-on-one situation for Suzuki Yuito, but the Spanish goalkeeper made a fantastic save to deny this opportunity.

After a scoreless first half, Coach OIWA Go gave a pep-talk during halftime to reassure the players about what they needed to do in the second half, as he sent the team out to the pitch by telling them, “We are not going to change our approach, let’s go out there and win!”

However, it was Spain who broke the deadlock. In the 47th minute, a Spanish player capitalised on a loose ball, after the Japanese defenders failed to fend off a cross delivered from the left side, to put the home side ahead.

In efforts to rally back, Japan collected the ball to Saito in the left side to create chances but cannot find ways to score the equaliser. Seeking to change the dynamics of the match, coach Oiwa introduced BANGNAGANDE Kashif (FC Tokyo), KAWASAKI Sota (Kyoto Sanga FC), and SATO Kein (Meiji University) to replace Kato, Yamamoto, and Saito in the 63rd minute, but the Japanese side struggled to gain momentum, as Spain effectively utilised the width of the pitch to posses the ball.

Spain scored their second goal in the 69th minute, when they converted a deflection of a shot taken inside the box. Despite the substitutions made in the 80th minute, which saw BABA Seiya (Tokyo Verdy), HATA Taiga (Shonan Bellmare), MATSUOKA Daiki (Shimizu S-Pulse), and NISHIKAWA Jun (Sagan Tosu) coming off the bench, Japan was kept scoreless to lose the match 0-2.

The U-21 Japan National Team will now travel to Portimao, Portugal on Saturday 19 November ahead of their friendly match against the U-21 Portugal National Team on Tuesday. 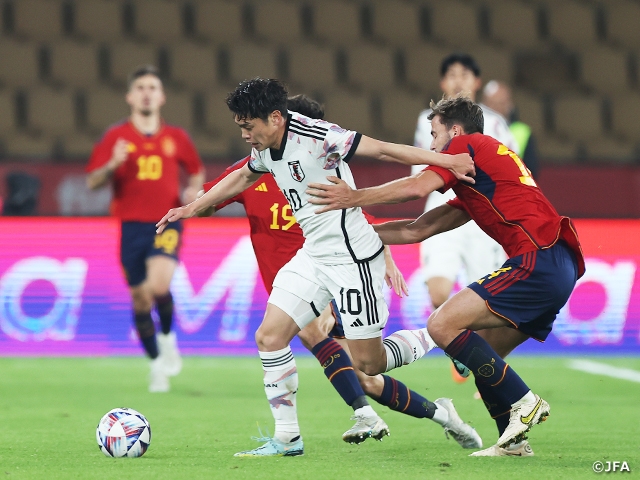 OIWA Go, Head Coach of U-21 Japan National Team
Through this match against a very talented Spanish side, we gained a better understanding of what we need to do and the path we need to take as a team. We entered this match prepared to take on new challenges on both the offensive and defensive ends while also keeping in mind that we have another match against Portugal in four days. I think our defence responded well against Spain’s high quality attacks, but conceded early in the second half, which was unfortunate because it was an area in which we made conscious efforts to improve since our last tour to Europe. We will be playing another tough away match against Portugal, so we will thoroughly analyse our opponents and try to prepare ourselves in the best way possible.

DF #15 KATO Hijiri (V-Varen Nagasaki)
Even more upsetting is the fact that we not only lost, but we lost to a team that played the kind of football we had been striving for and were completely outplayed in terms of ball possession. Although we were able to keep possession of the ball at the beginning of the first half, we were gradually being pushed back as the game progressed. But we didn't give away any crucial chances which gave us the feeling that we were defending well. However, our opponents seemed to have gained momentum from the goal we conceded just after the start of the second half. We were reminded once again that a goal conceded at restarts would make the rest of the game much harder. Spain played the kind of football we were striving for, so we want to make the most of this experience to improve our game ahead of our next match against Portugal and try to finish this tour with a win.

MF #6 KAWASAKI Sota (Kyoto Sanga FC)
I entered the game when the team was down 0-1 and I think I was able to play to my strengths, which is winning the ball. However, as soon as I came on, the team lost the second goal, which got me wondering what I could have done differently to prevent that goal. We made a lot of changes to our offence, which made things difficult for our attackers, but they worked extremely hard throughout the match, so I wish I could have provided more help. Although we ended up losing 0-2, I think we were able to do what we had intended, so we will continue to work hard to improve the quality of our play. Portugal plays a completely different style of football compared to Spain, but I believe we have a good chance if we stick to our fundamentals and do what we need to do. 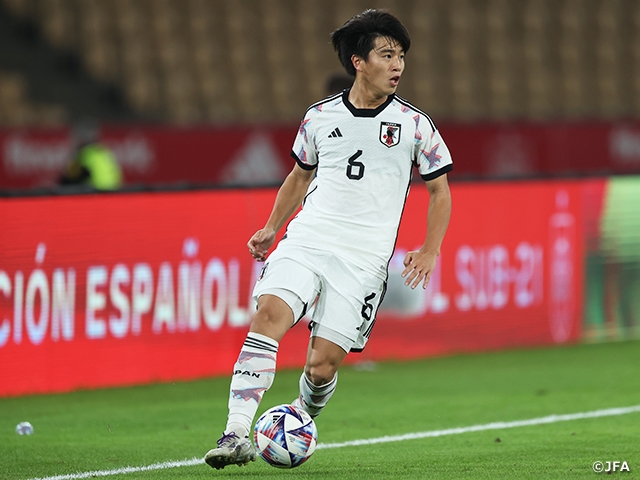 MF #13 SATO Kein (Meiji University)
The Spanish players were simply better than us. They were good at creating numerical advantages, were quick to take up positions, and had a wider vision. While we are aiming for the same style, we felt we could learn a lot from Spain to improve our football. Personally, I want to pose a threat to my opponents by making runs into the spaces behind their defence line and by improving the quality of my plays in the build-ups. I also want to be more aggressive when I have the ball in the attacking third.