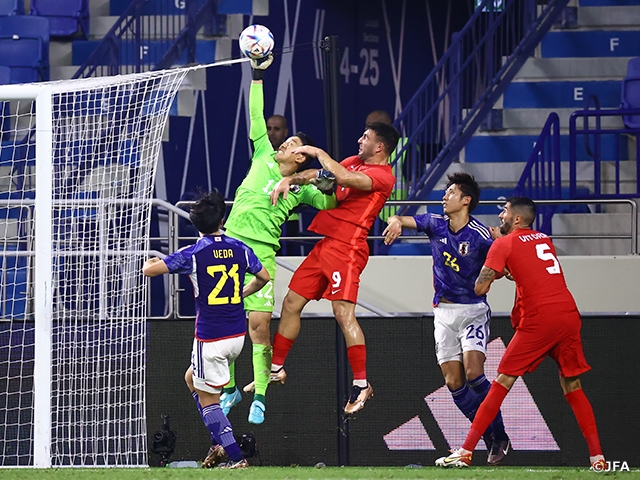 On Thursday 17 November, the SAMURAI BLUE (Japan National Team) played their final friendly match ahead of the FIFA World Cup Qatar 2022™ against the Canada National Team at Al Maktoum Stadium in Dubai. Despite taking an early lead with the goal scored by SOMA Yuki (Nagoya Grampus), Japan conceded the equaliser in the first half and the go-ahead goal during additional time of the second half to lose the match 1-2.

The match, which was played a week before the team’s first match of the tournament, provided the players with a valuable opportunity to improve their match fitness, especially since many of them were still recovering from injuries. 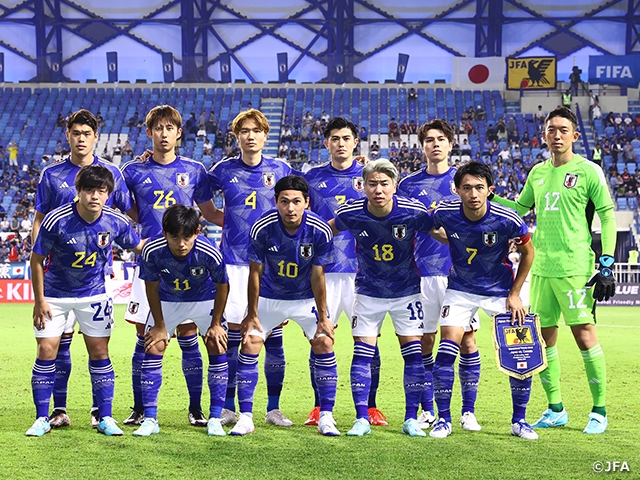 Facing a Canadian side, who are also scheduled to play their first match of the FIFA World Cup Qatar 2022™ on Wednesday 23, Japan showed great aggression from the outset, and scored the opening goal in the eighth minute, when Shibasaki delivered a lobbing pass towards the opposing box. It was Soma who responded to this delivery and managed to get a foot on the ball to redirect it into the goal. 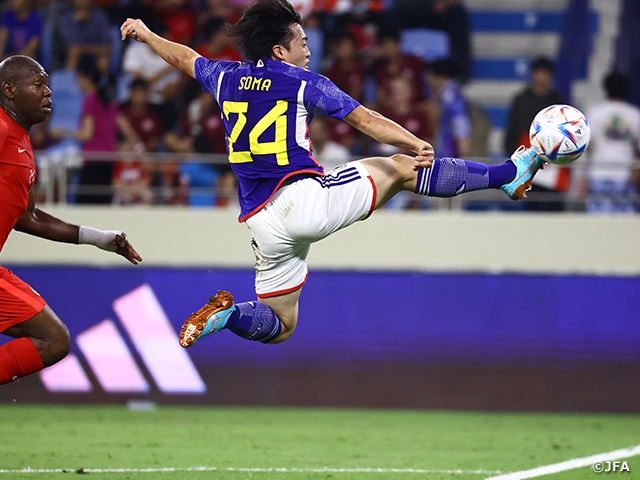 Gaining momentum from this goal, Japan continued to attack the flanks, as Sakai and Soma penetrated the right, while Minamino and Kubo created chances from the left side.

However, Canada, who finished first in the Concacaf qualifiers, took advantage of their speed to rally back, collecting the ball to Tajon BUCHANAN and Alistair JOHNSTON in the right side to challenge the Japanese defence line. As they applied more and more pressure upfront, the equaliser came from a corner kick in the 21st minute, when Steven VITORIA converted the loose ball inside the box to level the match.

Still tied at 1-1, KAMADA Daichi (Eintracht Frankfurt) was brought on to replace Tanaka in the defensive midfield position in the 66th minute, followed by the introduction of NAGATOMO Yuto (FC Tokyo), who replaced Itakura, which saw Ito being shift to the centre to allow Nagatomo to play in the left.

With the introduction of YOSHIDA Maya (FC Schalke 04) in the 85th minute, Japan shifted their system to a three-back formation, which allowed the two full-backs, Yamane and Nagatomo, to be in a more advance position to support the offence. This change in position almost came to fruition in the 89th minute, when Yamane responded to a through ball delivered by Shibasaki to break into the box, but his shot deflected off the post. 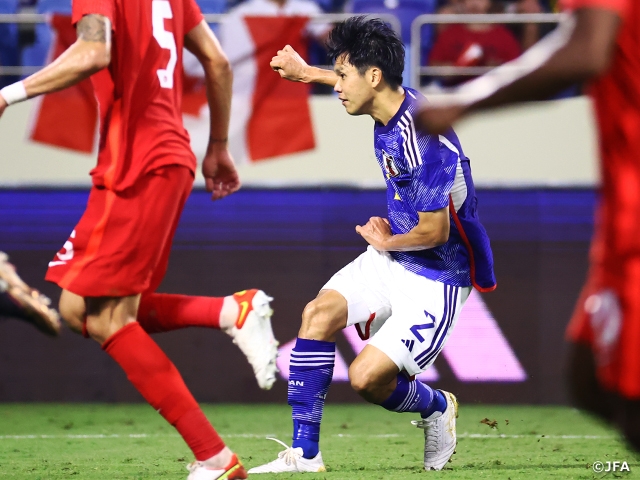 Canada also shifted their system to a three-back formation midway into the second half, as they applied more numbers upfront to create opportunities. The decisive moment came during additional time of the second half, when Richie LARYEA was brought down by Yamane inside the box. Lucas CAVALLINI converted the spot kick to put his side ahead, which turned out to be the winning goal, as Canada won the match 2-1.

In this match, Yoshida made his 122nd cap for the national team since making his national team debut against Yemen in January 2010, tying IHARA Masami (current coach of Kashiwa Reysol) for the third-most caps in Japan National Team history.

The SAMURAI BLUE will travel back to Doha on the Friday 18, before resuming training on Saturday 19, before entering their first group stage match against Germany on Wednesday 23.

MORIYASU Hajime, Head Coach of SAMURAI BLUE (Japan National Team)
We wanted to deliver a victory to our supporters and gain momentum ahead of our match against Germany, so this result was disappointing, but it served as a good preparation match for the World Cup. I think this match allowed us to solidify our strategy in case in case our squad is hit by injuries, illnesses, or suspensions. We also had to take into account the fatigue of the players playing in Europe. Given the current situation of the team, I feel like we managed to do well in terms of improving the overall condition of the team, going over our tactics, and testing a mid-game formation change. We made our decision to shift our formation in response to our opponents shifting to a three-back formation. Although we weren’t able to score, I feel like we were able to create some good opportunities from this change. However, we conceded both goals from set-pieces. In order to limit the number of set-pieces we concede, we need to correct how we approach the ball within our own half. We did well to win the ball when making our transition between offence to defence, but we still need to get ourselves on the same page in terms of when and how we are going to approach the ball when the opponents held the ball in space. We want to share these details and improve the quality so that the players can work in tandem against Germany. It is difficult to win duels without good timing, so we want to be more thorough in our preparations. We also want to strengthen our plays in the final third.

FP #4 ITAKURA Kou (Borussia MG/Germany)
I think this was a good match for me as an individual. I was able to play about 65 minutes at this speed and intensity, so I felt I could be in better shape for the Germany game. I didn't have any fears or concerns about my knee. I think I was fully aware of my condition and managed to play as well as I had in previous matches. I have always made conscious efforts to stop stronger and faster opponents like we faced today. We need to address how we conceded the goal from a set-piece today and make sure how we are going to defend in those situations. One mistake can cost us a goal, so we need to get everything sorted out before our match against Germany. In terms of our build-ups, I wish we could’ve taken more risks to send the ball down the middle. I also need to be more decisive on when and when not to go for the ball. 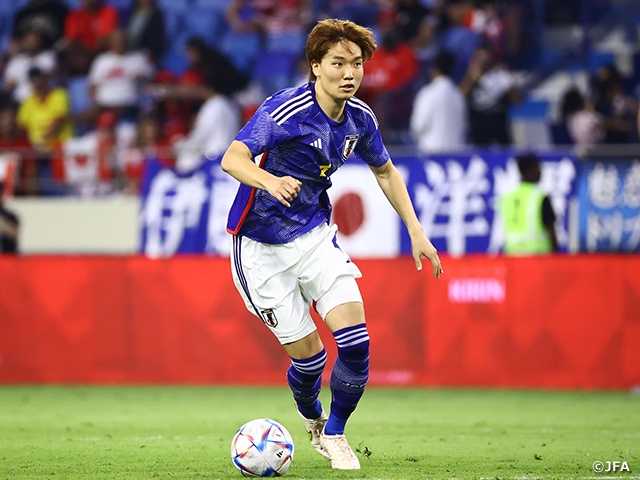 FP #7 SHIBASAKI Gaku (CD Leganes/Spain)
I think that kind of short counterattack could be a useful weapon for us, and Soma did a very good job to find that space, which allowed me to make that pass. It was not an easy pass to control, so he did great to score that goal. I am still in progress to find the right balance with Tanaka. For the most part, I am trying to let him play as he wants while I keep the balance in the middle, but there were times when we were doing well and times when we were a bit out of balance, so I think we still have room for improvements. (Regarding through-balls) I think that’s what the team needs me to do, and I am making conscious efforts to create chances for the team. We should analyse the match objectively to seek where we can improve, what we did well, how we can continue to do well, and why we did well. We came this far, so we need to seek what will work against Germany.

FP #10 MINAMINO Takumi (AS Monaco/France)
I think the first half was not so bad, but once our opponents started to take control in the second half, we hardly created any big chances as a team and there was room for improvement in many areas. It was frustrating to lose the match in the way we did today. I feel that my physical condition and sharpness are improving, but I feel that I need to take it to another level and become a better attacker who can finish off in decisive situations. We need to be on the same page in terms of who is going to the ball, especially late in the game when everyone is fatigued. It is important that we don’t concede late in these kind of matches.

FP #15 KAMADA Daichi (Eintracht Frankfurt/Germany)
I was able to win the ball when I wanted to as a defensive midfielder and attack as usual without making any mistakes. I believe that is what I am good at, and I feel like I was able to contribute what I had been doing in Germany to the team. I tried not to lose the ball in our attacks, but I think it was more the defence that wasn't working. It was hot, and as for the second half, we weren't playing with enough intensity. I still had fresh legs, so I was committed to press hard when our opponents had the ball. Overall, I think we were losing too many duels. We definitely have a talented team, but if we continue to lose the duels like that, we won’t be able to execute our game plan. Each player must be responsible and put forth a valiant effort when competing against a superior opponent like Germany. This may seem simple, but it is crucial. 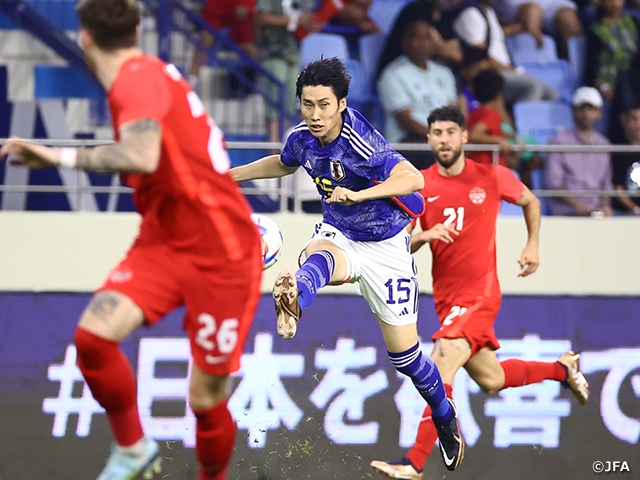 FP #22 YOSHIDA Maya (FC Schalke 04/Germany)
It was a game that displayed a lot of issues, so I think we need to get to work. The difference between winning a point or getting zero points, which can be a significant difference, can be determined by our ability to persevere through the game's final minutes. How we close out the match, including how we end the first half, is definitely an area we need to improve on. It also reminded us that we need to return to the basics in order to avoid committing too many fouls. 122 caps for the national team felt like an unreal number to me, but now that I have achieved it, I feel like I need to showcase a performance that will live up to this number. We have come a long way to qualify for seven consecutive World Cups since 1998, when Ihara-san was captain, and I want to show our predecessors how much Japan has improved over the years.

FP #24 SOMA Yuki (Nagoya Grampus)
It was frustrating to lose this match in the way we did at the end. I was anticipating to exploit the space behind the defenders, so I am glad I was able to capitalise on my first opportunity. I am happy that I was able to link up with Shibasaki, because I had been telling him from practice that I will be making those runs. I had a tough time playing in the right side at first, because the angle and direction felt different from when I played on the left, but I eventually got used to it as the game went on. The goal gave me a boost to my confidence, but the match left a lot of tasks we need to work on. We should be thankful that this wasn’t a match in the World Cup and try to make the most of this experience to get better.

John HERDMAN, Head Coach of Canada National Team
I think Japan is one of the top ten teams in the world in terms of intensity. We focused on how to score goals and how to play in the penalty area against one of the top technical teams. We showed our commitment to push and try to get the goal which we did. We also prepared very well mentally, and despite playing through a tight match, our players fought with a positive mentality in the last 20 minutes. It is a friendly and just one step, but we are proud of it.