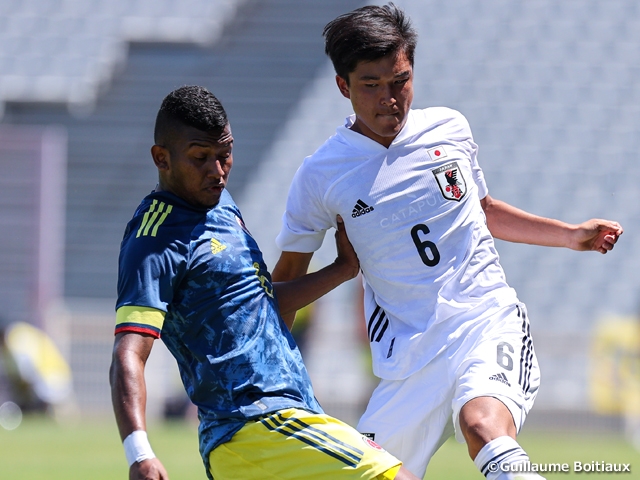 Before the match, the two teams were at the top of the leader board with four points, while Colombia held the advantage on goal difference. Japan kicked off the match in position to clinch the knockout stage with a win.

In a match between two sides looking to secure their spot into the next round, it was Japan who created the first chance. In the fourth minute, KITANO Sota (#9) reacted to the cut back of SAKAMOTO Isa (#22) to strike a shot, but his attempt went just wide of the target. Despite missing out on this opportunity, the Japanese side displayed great aggression to apply pressure to win the ball and initiate counterattacks.

Just before the end of the first half, SANO Kodai (#17) forced a turnover in the midfield before sending a through-ball to Sakamoto, who made a great move to shake off the defender inside the box, but his shot also failed to find the back of the net. 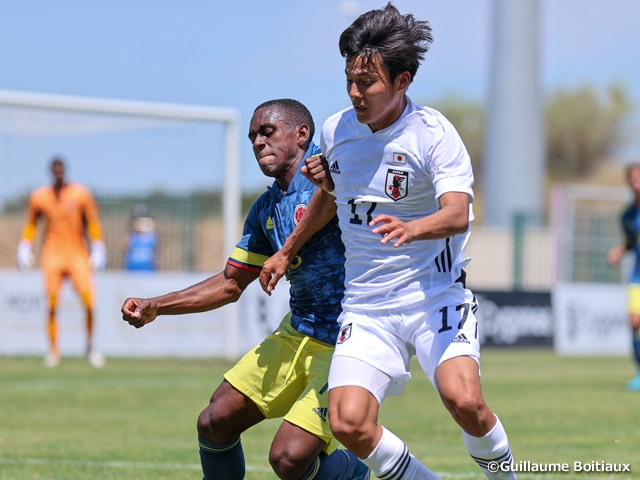 The deadlock was broken in the 47th minute, when Colombia initiated a counterattack to break into the Japanese penalty area. With the ball being cut back towards the centre, the shot taken from the edge of the box took an unfortunate deflection off MATSUDA Hayate (#19) and into the net.

Gaining momentum from the opener, Colombia doubled their lead in the 61st minute, when they broke down the heart of the Japanese defence before piercing a powerful shot into the net.

With their backs against the wall, Japan started to rush their plays and made uncharacteristic mistakes to control the ball but started to rally in the closing minutes. In the 88th minute, NAKAMURA Jiro (#8) converted a penalty kick earned by Matsuda to cut down the deficit in half.

Needing just one more goal to force the match into a penalty shootout, the Japanese players made their final efforts to keep their tournament hopes alive but ran out of time, losing to Colombia 1-2. 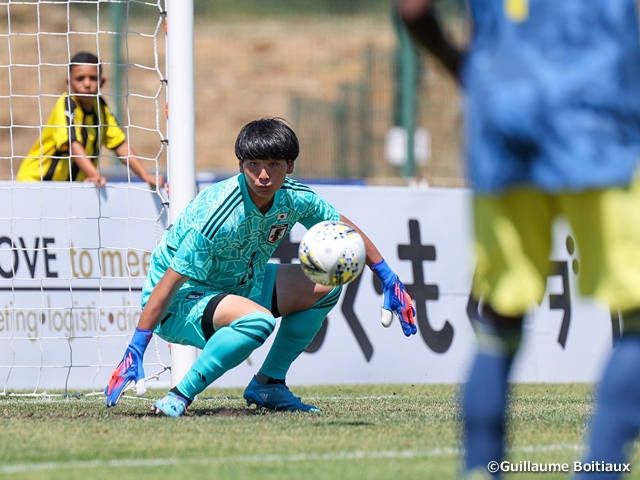 After finishing the group stage with four points, Japan fell short from reaching the knockout stage. They will face the U-20 Argentina National Team in the fifth/sixth place play-off on Friday 10 June.

MF #6 YAMANE Riku (Yokohama F. Marinos)
This match against Colombia was a very important match with the World Cup in mind, as the opponent was also an U-19 team. We managed to take control of the ball possession in the first half and demonstrate what we wanted to do as a team. However, despite creating many opportunities, we were not able to capitalise when we had momentum on our side and ended up conceding at the beginning of the second half. We need to raise the quality of our plays in the final third, not only as a team, but also as individuals. We still have a match left to play, so we hope to make the most of this experience and finish the tournament on a high note.

MF #8 NAKAMURA Jiro (Gamba Osaka)
I am glad I was able to score a goal despite entering the match in the second half. However, the team was not able to advance to the semi-finals and I was not satisfied with my performance neither. I made my first appearance in this tournament in our second match against Comoros but couldn’t find my rhythm in that match and had to sub-off after playing just 45 minutes. The fact that I was able to convert that spot-kick was a relief, and I am thankful for my teammates. We are left with just one more match in this tournament, so we hope to stay positive and give our best efforts until the very end.

FW #22 SAKAMOTO Isa (Gamba Osaka)
With our tournament lives at stake, this match against Colombia was a very important match for us, so I am very disappointed with this result. We were able to keep the ball moving and create chances in the first half but lacked quality in the final third to convert our chances. However, there is no time to dwell on this loss. We must reset our minds and start preparing ourselves for the next match, so that we can finish this tournament on a high note.