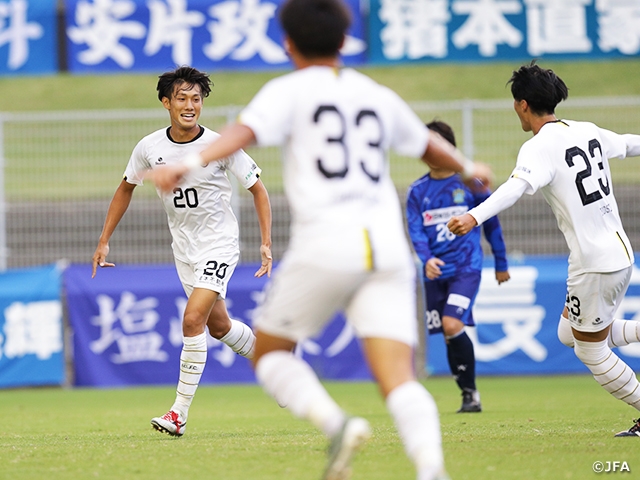 The one remaining second round fixture of the Emperor's Cup JFA 100th Japan Football Championship took place on Wednesday 30 September.

A match between two first timers took place at Hiroshima, as Fukuyama City FC (Hiroshima) and FC Baleine Shimonoseki (Yamaguchi) squared off. The match kicked-off with Fukuyama taking the initiative, as coach KOYANO Hiromu mentioned about their approach, “We wanted to start off the match by playing solid defence.” The Fukuyama side who are striving to enter the J.League by 2024, showcased great defence in the flanks, kept the ball moving, and created chances by effectively using the width of the field.

In the 25th minute, SUMIDA Wataru delivered a pass to ISOE Taisei, who made a run into the box before sending the final pass towards middle, allowing TAGUCHI Shun to score the opening goal. Fukuyama came close to doubling their lead in the 28th minute when TAKAHASHI Hiroki broke through the left flank and delivered a cross towards the goal. It was YOSHII Yusuke, who made a sliding effort to convert the opportunity, but their attempt failed to capture the goal. Yoshii had another opportunity in the 35th minute, when he responded to a through-ball sent by Taguchi, but his shot went wide of the target. 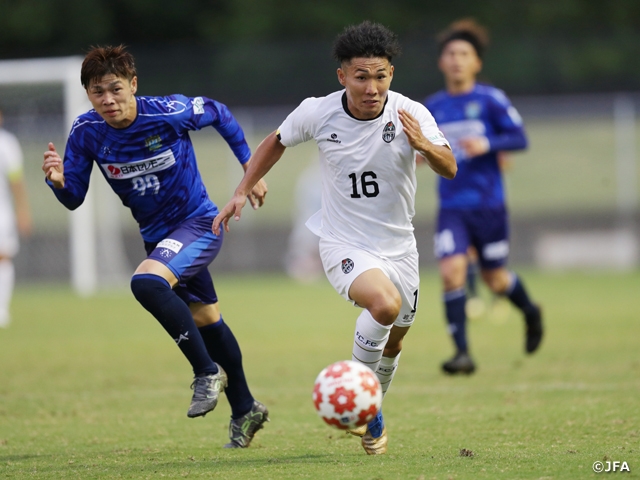 Shimonoseki, who are also seeking to join the J.League in the close future, entered this match following a match played in a different tournament just three days ago. The team focused on their defence and build-up plays, as coach FUKUHARA Kota mentioned, “We wanted to keep the game scoreless in the first half, and take our chances in the second half,” but ended up conceding a goal midway through the first half. Despite creating some chances through their wingers, OGA Yusho and SON Jeong-Ryun, the team lacked quality in their final touches and failed to threaten the opposing goal.

With the team trailing by a goal, Shimonoseki brought in their core players in the second half. As they started to add more layers to their offence and utilised the width of the field, the visiting side started to create more opportunities upfront. Oga and TANIMOTO Kazuya combined to create a chance, but the shot was denied by the Fukuyama defence. With momentum on their side, Shimonoseki continued to apply pressure. In the 76th minute, NISHIDA Kenshiro won the ball deep in the Fukuyama territory to allow MASUDA Yushiro to take a shot, but his attempt fell short from equalising the match. Moments before the final whistle, MUTSURO Takeru combined with TAHARA Iori to take a powerful shot, but his effort was blocked by the opposing GK HIRATA Riku, giving the home side a 1-0 shut-out victory. Following their victory, coach Koyano mentioned, “Our goal is to earn a victory over a J club. In order to achieve that goal, we must win three more matches, so we will continue to focus on the results.” 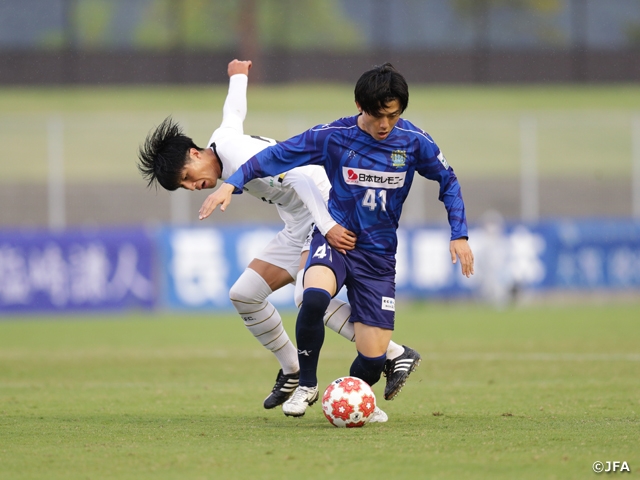 With the conclusion of this match, all 16 teams advancing to the third round have been determined. The third round will take place on Wednesday 28 October and Wednesday 11 November.

KOYANO Hiromu, Coach (Fukuyama City FC)
While our team play in the prefectural league, our opponent plays in the Chugoku regional league, so I told my players to enter the match with a challenger’s spirit. We were able to execute our game plan, but it would have been better if we were able to score one more goal. Our build-up plays were good, but we lacked quality in the final third, so we hope to improve ourselves in that aspect before the next match. With our team advancing to the third round, we will be the only team belonging in a prefectural league, making us the lowest ranked team in the tournament. We will not have a chance if we play passively, so we will continue to play aggressively with a challenger’s spirit.

TANAKA Sho (Fukuyama City FC)
Although we were getting dominated towards the end, I gave everything I have got to defend our goal and focused on coaching our attacking players to apply pressure from the front line. The opponent’s attacks were just as our coach analysed, so we were able to showcase what we have been working in our trainings. I feel like we were all able to enter this week with a positive vibe. Including the bench members, the entire team was in sync, and that must have been one of the reasons we were able to win today. Although the match was played on a weekday, many supporters came to watch our match. Their presence gave us lots of courage in this knockout competition. We will give our best efforts to heighten the quality of our plays and prepare ourselves ahead of the third round.

FUKUHARA Kota, Coach (FC Baleine Shimonoseki)
In order to win this match, we wanted to keep the first half scoreless, but after conceding a goal, it became a tough match for us. In the second half, we managed to increase our time in offence, but our opponent did well to deny our attacks in the flanks. You can tell that they came prepared for this match. We still created plenty of opportunities, so it was unfortunate that we were not able to capitalise on our chances. Despite the tough situation surrounding the society, we are grateful that we were given the opportunity to play such a wonderful match in front of our fans. It really made us realise that we must never take for granted of the environment we were given. Our team consists with many players who have never played in a national competition, so this match gave us a wonderful learning experience.

YOSHIZAWA Rintaro (FC Baleine Shimonoseki)
We entered the match thinking we can take control of the match if we can keep the first half scoreless but ended up conceding a goal in the first half, which shattered our game plan. Our opponent was more critical in the attacking third as well. After it was determined that we were going to play in the Emperor's Cup for the first time, many people have supported us, including the mayor and our sponsors. We were hoping to make a deeper run to put the spotlight on the city of Shimonoseki. This was my first appearance in a national tournament, so today has become a special day for me. I was so excited, and it made me want to return to this stage in the near future.