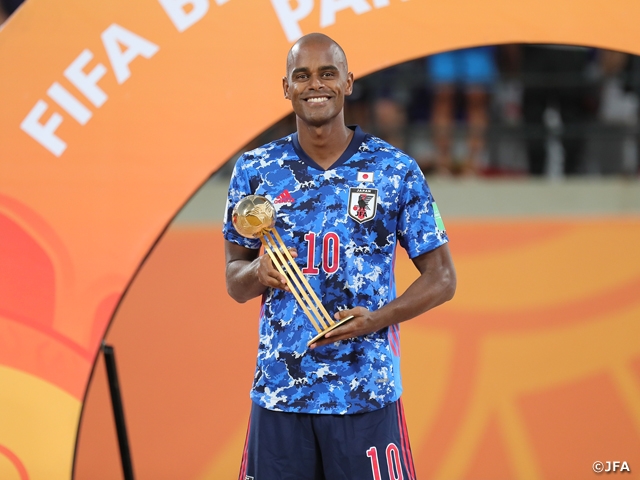 JFA would like to announce that Mr. MOREIRA Ozu has been named as the new coach of Japan Beach Soccer National Team. Along with his duty as a coach, Mr. Moreira will continue to play as a player as well.

MOREIRA Ozu, Coach
I have been newly appointed as the coach of Japan Beach Soccer National Team. With the team reaching the top in Asia, we must now prepare ourselves to reach the top of the world. Both as a player and a coach, I will give my utmost efforts to promote the sport and strive to showcase the strength of Japan National Team.

KITAZAWA Tsuyoshi, Chairman of JFA Futsal Committee
We are delighted to have one of the most profound beach soccer players in the world to become the coach of Japan Beach Soccer National Team. The team finished in fourth place at the FIFA Beach Soccer World Cup Paraguay 2019, which was a tournament that made us realise what we need to do to become the world champions. Mr. Moreira was named as the tournament MVP at that World Cup, and his playing career is filled with top class achievements. We are hoping that his presence will allow the players of Japan National Team to feed off of his world class skills, strategies, and mental strengths to help bring the team to a higher level. Japan Beach Soccer National Team is about to face a generation change. Mr. Moreira is a person who is fully aware of the world trends and the current situation surrounding the beach soccer scene in Japan, which makes him the perfect fit to spread JFA’s mid/long-term vision to the Japan beach soccer community and carryout the rebuilding process of the national team, both as a player and a coach.