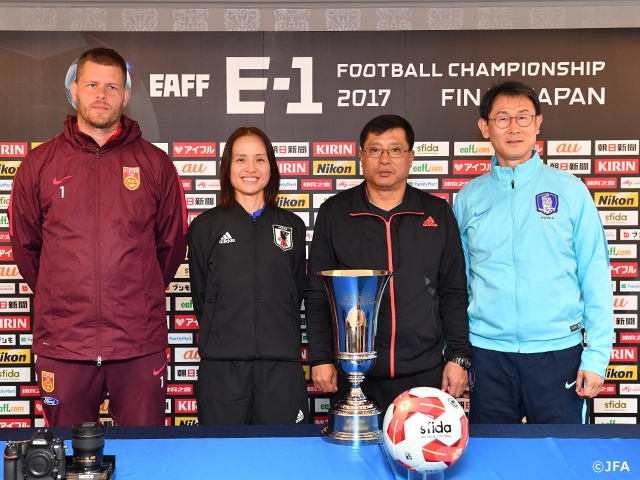 Three other coaches of the participating countries also joined TAKAKURA to share their version of outlook for the tournament starting in two days.

TAKAKURA said of the current state of her mind with smiles, “I look forward to being a part of such a wonderful tournament. We started practicing two days ago, and our players are showing very good look full of energy and enthusiasm.” Apparently, she is satisfied with the team coming in good shape ahead of the tournament.

On the four participating countries who are all sitting near the top of the FIFA ranking, she expects the tournament to be full of heated and competitive battles of pride, saying “there is no need to point out that these four teams have been great rivals in Asia and competed against each other.” “I want everyone to witness how our new players perform. We will play good games,” added the coach.

On the same day, the squad had two practice sessions, one in the morning and the other in the afternoon. While the first was short and light for about one hour focusing on individual conditioning, more time was spent for the tactics with higher intensity in the second. After warmed up by stretching and splinting, the players engaged in a 7x3 passing drill, polishing their skills to control the ball with less but accurate touches and fast passes.

Next, they went through player movements by fully using the pitch. Coach TAKAKURA stayed on the pitch moving around with the players and giving instructions as her breath was quite visible with the low temperature. Afterwards, various set pieces were reviewed repeatedly as well.

With plenty of communication on the pitch among the players themselves, the preparation for the opening match against Korea Republic on Friday 8 ended on a good note. 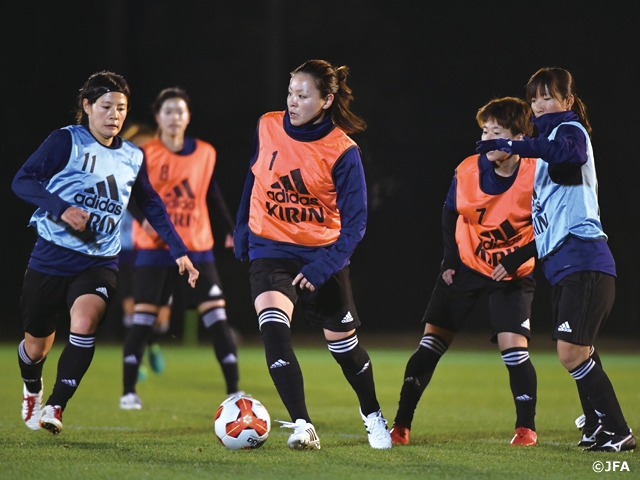 TAKAKURA Asako, Coach (Japan Women’s National Team)
I look forward to being a part of such a wonderful tournament. We started practicing two days ago, and our players are showing very good look full of energy and enthusiasm. I am telling them to be a player who can make a difference. I myself can’t wait to see who can lead Japan to victories in this tournament. I have high expectation for everybody on this team. It has been said that Japan have very good skills to control the ball, but we want to show how well we can play as each one of us thinks how we show such skills in various situations in matches. However these matches turn out to be, I think we can show our attitude that we never give up playing hard from the kick-off whistle and the time-up whistle. That mentality and our skills, we want to show the most.

KIM KWANG MIN, Coach (DPR Korea Women's National Team)
Our country won the FIFA U-20 Women’s World Cup last year. In the AFC U-19 Women’s Championship this year, too, we built our national team with a good mix of young players. We have rebuilt our team since this tournament in 2013 and 2015, but we still maintain the team’s capability. We will go out to play with a mindset that we will perform as well as we did in the past.

YOON DUK YEO, Coach (Korea Rep. Women's National Team)
I am very happy to participate in this tournament with such a wonderful team. This tournament has full of outstanding teams. Objectively speaking, our team may be inferior to others, but our passion for winning matches is as strong as that of any other teams. We will play hard and do our best to show good plays to all the people supporting our team in our country.

DF #2  OYA Ayumi (Ehime FC Ladies)
Our target in this tournament as a team is to win the championship, so I think about what I can do and what this team can do as I play. The level of my defence is not so high yet, so I will try not to be outplayed. It’s difficult to position myself well and find the right timing to go up to attack, but still I need to show my strength there. I want to keep attacking. In particular, I will try to overlap and make assists that can result in our team’s goals. Defence cannot be done by just one player. I am learning how to play team defence by asking SAMESHIMA Aya (who has made a position change as well) and through other means, too. During this camp, I want to gain more of such knowledge, play aggressively and do my best to be a part of the core of the team for the Women’s World Cup.

DF #20  MOMIKI Yuka (NIPPON TV BELEZA)
During the Jordan trip, I was able to send the balls to upfront but not many cross balls. I couldn’t play out my game. This tournament is a work continued from the Jordan trip. I will aggressively try to show my plays and help the team. 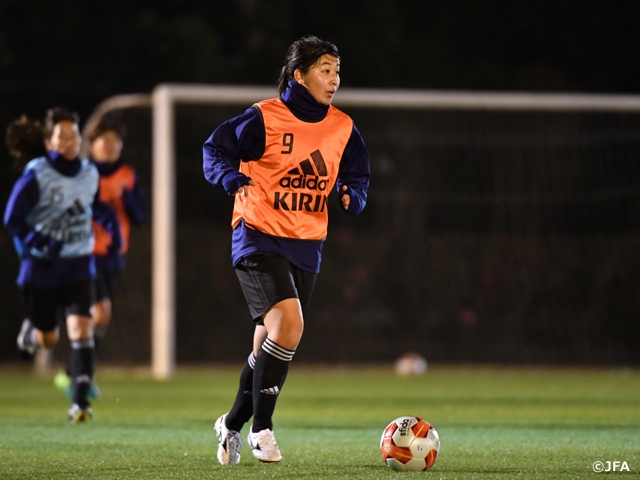