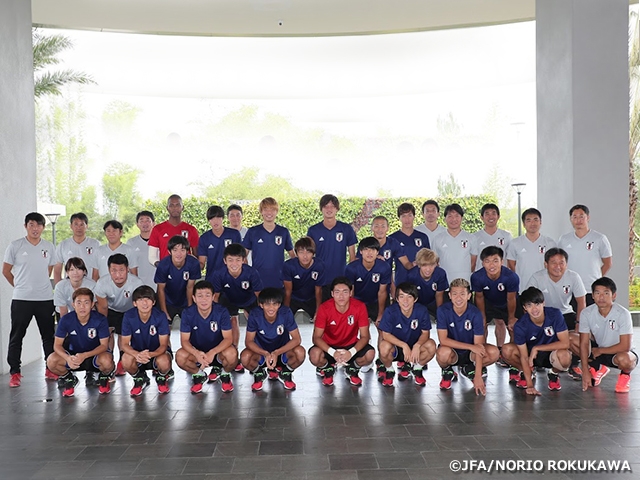 On Friday 31 August, one day ahead of the final at the 18th Asian Games 2018 Jakarta Palembang, the U-21 Japan National Team held their final training session at Bogor, Indonesia.

Following their warmups, the players were seen conducting drills involving possessions and ball works. The session concluded by going over their side attacks as the players worked up the sweat for about an hour under the scorching sunlight. Coach MORIYASU Hajime mentioned of his team’s growth, “During these six matches, the players have shown great improvements as they found tasks each match and made the adjustments accordingly.” He continued by sharing this aspiration ahead of the final, “I want them to showcase what we have worked on and perform with great confidence.” 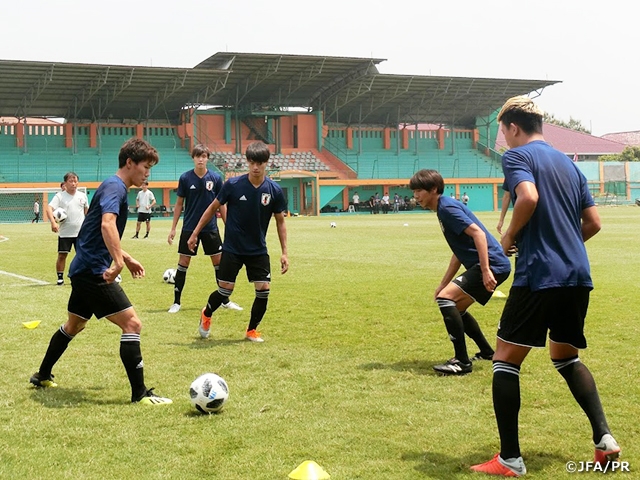 Their opponent at the final will be the U-23 Korea Republic National Team, who has utilised their overage players effectively by adding their top team members, goalkeeper Jo Hyeon-woo, forwards Son Heung-min, and Hwang Ui-jo. With their overwhelming attacking power, they have won against Iran, Uzbekistan, and Vietnam at the knockout stage. At the official press-conference held this day, everybody’s attention was towards Son Heung-min, who plays for the Premier League’s Tottenham Hotspur. In regard to facing a U-21 squad, the Korea Republic ace mentioned, “In football age is not a big factor. Each team will play with 11 players apiece.” He continued by sharing his take on the match, “Japan is a very strong team that deserves to be in the final, so I am looking forward for this match. However, we are starving for a title.”

Japan on the other hand has made it to the final with their collective effort in defence and the hard work displayed by the entire team. Team captain, MIYOSHI Koji stated, “This match against Korea Republic is a huge opportunity for us. We will challenge them with great joy.” IWASAKI Yuto followed by mentioning, “Our willingness to win has grown with each game we played.” ENDO Keita also shared his eagerness to win the title, “This team has the mentality of the winners and deserves to win the title. I don’t care how we do it, either by playing 120 minutes or by penalty kicks, I just want to win the match.”

The final match of the 18th Asian Games between the U-23 Korea Republic National Team and the U-21 Japan National Team will take place on Saturday 1 September with a kick-off time of 18:30 local time (20:30 Japan time). 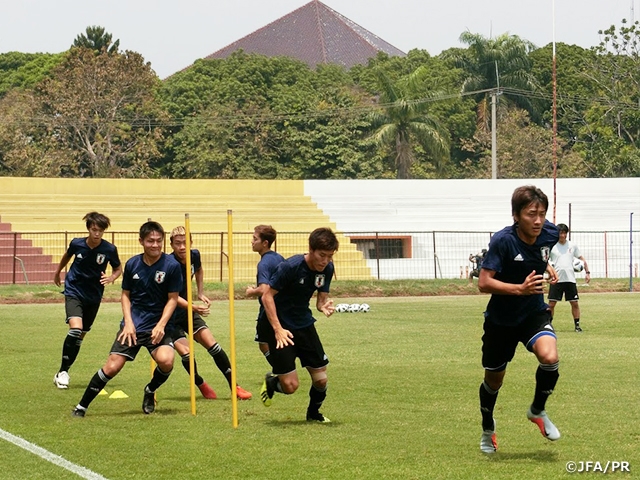 MORIYASU Hajime, Coach (U-21 Japan National Team)
Not only do they feature players with great talents, Korea Republic is a very strong team. We must take responsibilities at each position and I want my players to challenge aggressively. The players will have to anticipate what the opponents are going to do and play with more options than them. Our players have shown great growth during this tournament. Regardless of who we face, we just have to keep on challenging ourselves. We have prepared ourselves well ahead of tomorrow, so I hope our players can perform to their full potential and play with confidence.

GK #1 KOJIMA Ryosuke (Waseda University)
We are just one win away from our goal of winning the title. All we have to do now is to play to our fullest. The attacking players of Korea Republic is very powerful, and we will certainly face more adversity than our previous matches. I must input all the information in my head and utilise it to make effective decision makings during the match. I will focus on giving out directions to evade attacking threats from being created by the other side.

DF #7 HARA Teruki (Albirex Niigata)
We managed to conduct a good training session with a positive vibe today, and despite the short lead time, we were able to prepare ourselves well ahead of the final. It is clear to everyone’s eyes that Korea Republic has a powerful attacking third. But we can’t be afraid of them and make a passive approach. Every player must fight in each of their positions and display our style of football. I will fight the match with everything I’ve got.

MF #10 MIYOSHI Koji (Hokkaido Consadole Sapporo)
This will be a very big match for Japan. I feel fortunate to be able to play against a strong Korea Republic team at the final of the Asian Games. We have played each of our matches from the group stage with great intensity and that will not change in the final. Regardless of who we play, we just have to prepare ourselves to perform our very best football. This is a major opportunity for us that can have a huge impact on our football career. We will challenge as a team with great joy.