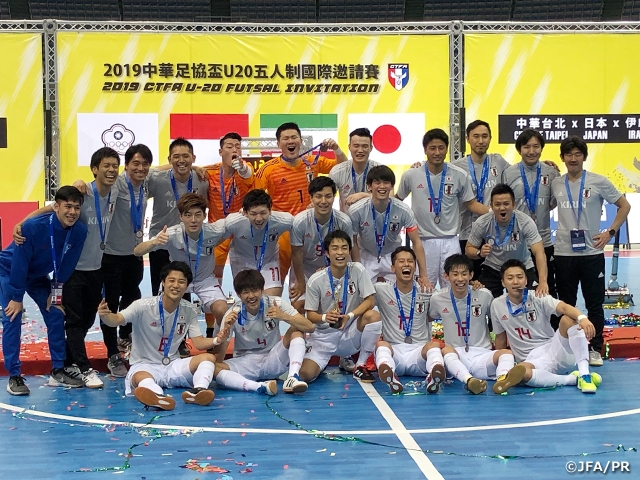 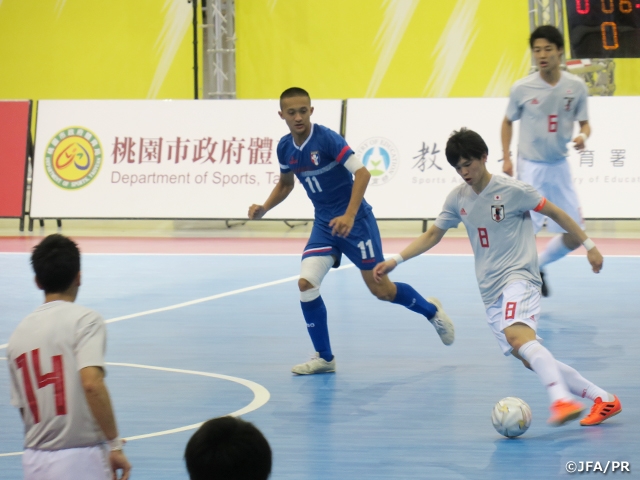 Despite losing to Iran on the previous day, Japan’s hope to win the title was kept alive after Indonesia won their match against Iran on the match played just ahead of them. Coach SUZUKI Ryuji sent off his players by giving them a pep-talk, “All the work-load we have put in has created this situation for us. Let’s enjoy this moment and take home the title.”

It was Japan who took the initiative of the match in the early minutes. In the fifth minute, MOTOISHI Takehiro converted the pass delivered by TAKAHASHI Yudai to give Japan the lead. However, with the crowd supporting their back, the home side rallied to threaten the Japanese goal. In the seventh minute, a one-on-one situation was created for Chinese Taipei, but the Japanese goalkeeper INANO Shin made a superb save to keep the score intact. With both sides showcasing great intensity on the court, the match entered a deadlock for a while, but Chinese Taipei captured the equaliser in the 17th minute, when they forced a turnover deep in the opposing territory, sending the match into halftime with an even score of 1-1. 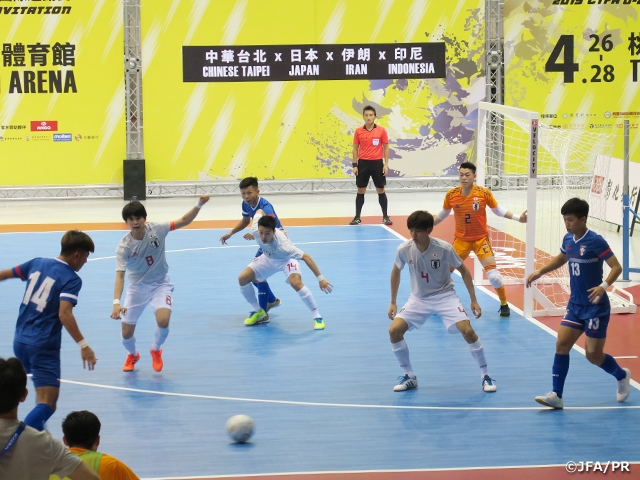 The second half saw the Japanese side applying even stronger pressure than the first half. In the 21st minute, Motoishi found YAMADA Kaito making a run in the left side, who then delivered the ball towards the centre to allow OSAWA Masashi to score the go-ahead goal. Just four minutes later, Yamada received the ball unmarked in the central area and struck a shot into the net. Motoishi followed in the 34th minute when he converted the pass delivered by KIMURA Yuta. In the closing seconds of the match, Yamada scored from an interception to finish off the match with a score of 5-1.

As a result, Japan finished the international friendly tournament as the champions. In the closing ceremony held after the match, Yamada and Motoishi were named as the top scorers of the tournament with their three goals.

SUZUKI Ryuji, Coach
We were able to finish the tournament as champions. Ahead of the AFC U-20 Futsal Championship scheduled in June, this tournament has given us a great opportunity to strengthen and develop the team. I would like to congratulate the players for their strong intention and efforts to take down the title. I would also like to thank all the supporters, those who attended the match, those who have supported us from Japan, and everybody who was involved in this tournament. Thank you very much.

FP #3 IGUCHI Rintaro (Shriker Osaka U-18)
I personally felt like I was able to strengthen my mentality through these three matches. I also believe that our team has improved so much through this tournament and it gave me an even stronger will to contribute for the team. We don’t have much time left ahead of the AFC Championship, so once we return to Japan, we will cherish each day and work hard to improve ourselves.

FP #5 HATAKEYAMA Yuki (F. League Select Team)
First of all, I am so glad that we were able to win the tournament. However, none of the players are satisfied with this result, since our goal is set at a higher level. Once I return to my team, I will implement what I’ve learned from this tournament and strive to become a better player.

FP #11 MOTOISHI Takehiro (Pescadola Machida Aspirante)
I would like to express my sincere gratitude towards my teammates, coaches, staffs, supporters who attended the match in Taiwan, and the people who supported us from Japan. I am so happy to win this tournament. However, this tournament has made us realise what we need to work on. By facing the current Asian champions, Iran, and other powerhouses of Asia, we were able to find out where we stand in Asia and what we must do ahead of the AFC Championship. We will give our very best to take home the champions’ trophy. Once we return to our teams, we will continue to train hard and strive to improve ourselves.