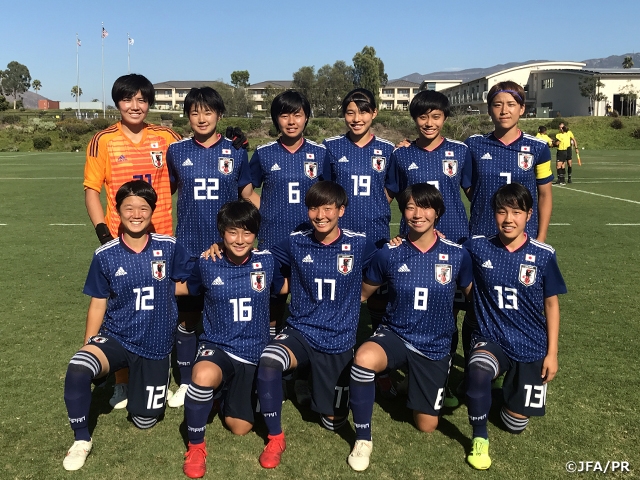 Following their 2-1 victory over the U-19 USA Women's National Team in the first friendly match, the U-19 Japan Women's National Team made four changes to their starting line-up. The match saw early action, as the USA showcased great intensity to start off the match and captured the opening goal in the 12th minute. Japan came close to levelling the match in the 17th minute, when ITO Sara delivered a pass to HIROSAWA Maho, who sent a cross that allowed MORITA Misaki to strike a shot, but her attempt was denied by the goalkeeper.

The second half saw the Japanese side take control of the match but struggled to capitalise on their opportunities. In the 60th minute, OSAWA Haruka responded to a through ball delivered by Morita, but fell short from striking a shot. Desperately needing a goal, Japan created numbers of chances, but failed to convert them, as the match ended with a final score of 0-1. As a result, Japan concluded the USA tour with an even record of one win and one loss.

The U-19 Japan Women's National Team is scheduled to compete at the AFC U-19 Women's Championship at Thailand in October.

GK #18 INO Maya (Nittaidai FIELDS Yokohama)
Compared to the first match, the USA changed their approach in defence, and we weren’t able to make the adjustments against them. As a result, we allowed our opponents to utilise their speed and conceded many opportunities. Although we managed to create many chances in the second half, we failed to convert them and loss the match. Ahead of the AFC Championship, we must work on the tasks we saw during this tour and make the necessary adjustments to make the team better.

DF #7 TAKAHASHI Hana (Urawa Red Diamonds Ladies)
Following the first match, both teams made the adjustments before entering this match. In the first half, we struggled against the changes made by the USA and conceded the opening goal. It made us realise that we needed to be more flexible in order to make the adjustments on the field and respond to the changes more quickly. As the match progressed, we managed to take control of the match and create many chances. The fact that we were able to show our dominance was great, but we still had to convert our chances to score goals. Ahead of the Asian qualifiers, we must all work hard to strive for a higher level as an individual and as a team.