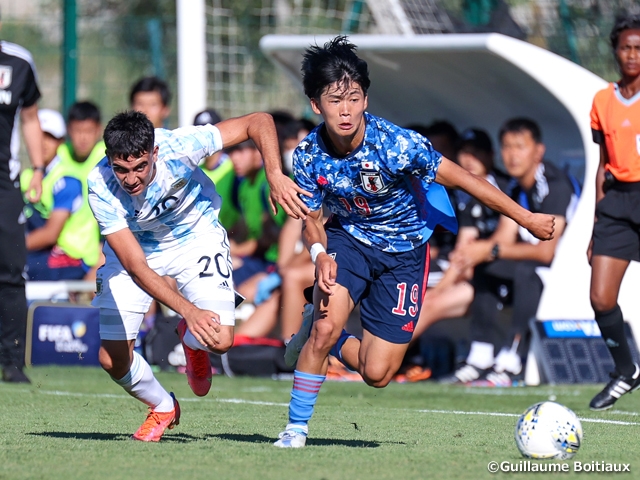 On Friday 10 June, the U-19 Japan National Team played against the U-20 Argentina National Team in the 5th/6th place play-off of the 48th Maurice Revello Tournament (formerly Toulon Tournament).

Coach TOGASHI Koichi returned to the team after testing positive for COVID-19 on the day of their first group stage match and took on the South American giants led by coach Javier MASCHERANO.

The first half began with Argentina taking over the pace from the 15th minute onwards, and the game continued to be difficult for Japan. Even when they got the ball, they faced aggressive pressure from the Argentinian players and were unable to play freely.

After striking the crossbar from a freekick taken in the 22nd minute, Argentina inched closer to the Japanese goal as minutes went by and scored the opener in the 37th minute with a superb individual effort shown inside the box. With the South American side adding another goal in the 43rd minute, Japan went into halftime two goals behind. 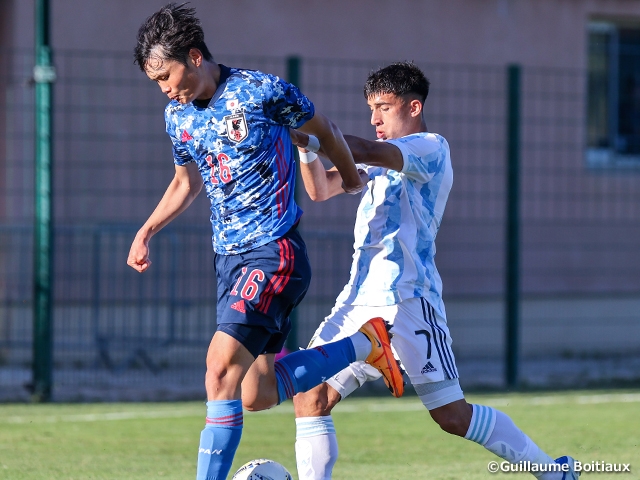 In efforts to rally back, Japan made two changes during the break and managed to cut the deficit in half with the PK converted by SAKAMOTO Isa (#22) in the 61st minute, but conceded soon afterwards in the 64th minute, to once again trial by two goals.

Although Japan managed to score a goal in the closing minutes from another penalty kick, this time converted by YOKOYAMA Ayumu (#10), the team fell short from equalising the score, losing the match 2-3 to finish the tournament in sixth place. 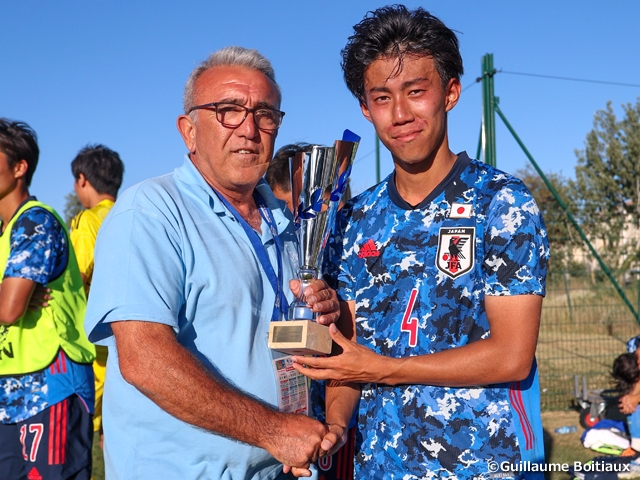 TOGASHI Koichi, Head Coach
After completing the whole tournament, I felt once again that it was great to be able to participate in an international competition. We were able to experience the level of the teams competing in this prestigious tournament and the brilliant way in which the tournament was organised. Above all, we were able to realise that the world standards we had discussed in our meetings and trainings were even higher than what we had expected. It was a harsh reality, more than enough to make up for the two years lost in the Corona pandemic, and a precious experience that will accelerate the players' development. The team's goal will remain the same, which means that we must grow and change as a team in order to get there. We must do more. We can do more. We are reminded that football is a global sport. We would like to once again thank the teams for providing the players during this time of the year. Thank you very much.

DF #2 KIKUCHI Shuta (Shimizu S-Pulse)
Unfortunately, we finished in sixth place. Today's match against Argentina was a difficult one, as we were often outplayed and lost the battles in crucial areas. I think it was good that we kept trying to score goals until the final whistle. However, we were reminded of the gap between us and the rest of the world in many situations. We will sort out what worked well and what we need to improve on and try to make the most of this experience as we go back to our own teams. Thank you very much for your support from Japan. We will do our best to deliver good results next time.

DF #13 MAEDA Haddow Jay (Blackburn Rovers FC/England)
We were able to stay organised and fight as a team. There were both good and bad aspects, but we were able to fight with a high spirit until the end. Although we finished the tournament in sixth place, I feel that we were able to showcase our skills and team tactics against teams of a higher age group with stronger physiques. I think it was a good preparation for the FIFA U-20 World Cup™ qualifiers, and we will continue to build on what went right, fix what we can improve on and prepare for the Asian qualifiers.

MF #17 SANO Kodai (Fagiano Okayama)
We entered this match with the intention of finishing the tournament on a high note and to see how well we could do against Argentina. However, we ended up losing 2-3, and although we scored two goals, we were completely outplayed throughout the match. They were better than us in all areas and didn't let us do anything. The tournament is over, but the league competition will continue, so I will take back the experience I gained from this tournament and try to grow further as a player. Thank you for all the support.