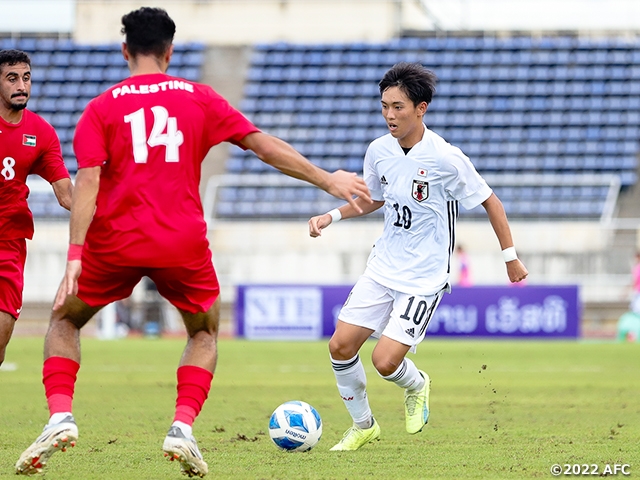 On Friday 16 September, the U-19 Japan National Team played their third group match of the AFC U20 Asian Cup Uzbekistan 2023™ Qualifiers against the U-19 Palestine National Team at New Laos National Stadium.

Palestine on the other hand, changed their style for this match and entered with a five-back formation. “I was surprised to see how deep our opponents were,” said Fukui, as the Japanese side struggled to create opportunities in the early minutes of the match.

However, after making adjustments against this unexpected formation change, Japan scored the opening goal in the 26th minute, when Sano struck a header off a cross delivered by Nakano. Although this shot was deflected by the goalkeeper, Kitano was there to convert the loose ball. Fukui followed in the 28th minute to score a goal from a set-piece, before Sakamoto made it 3-0 just before halftime. Japan made conscious efforts to penetrate the flanks, which turned out to be effective in the first half, as Sano later reflected, “(facing a five-back formation) We kept reminding each other to utilise the width of the field.” 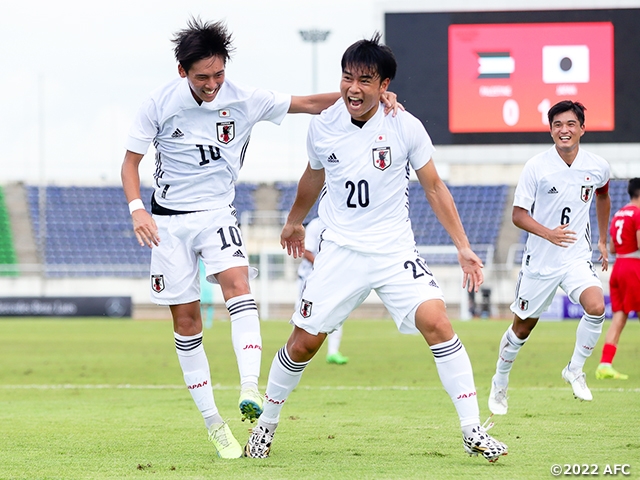 Japan’s goal spree continued in the second half. After Sakamoto converted a spot kick in the 47th minute, two players who entered as substitutes, CHIBA Kanta (FC Imabari) and KUMATORIYA Issei (Meiji University) scored back-to-back goals in the 65th and 68th minute, before Chiba added two more in the 73rd and 77th minute to complete his hat-trick. As a result, Japan recorded their third win with a score of 8-0.

TOGASHI Koichi, Head Coach of U-19 Japan National Team
I would like to thank the players for fighting hard for the entire 90 minutes. Palestine entered the match in a way that we didn't expect them to, so I think there was a bit of confusion for the first 20 minutes or so. However, we had been working on how to attack against a five-back formation, so we eventually managed to deal with them. We still have a match left to play, so we will continue to work hard to finish the tournament on a high note.

MF #7 SANO Kodai (Fagiano Okayama)
Facing an opponent with a five-back formation, we made conscious efforts to create chances from the flanks. We also knew from our scouting report that the opponents had the tendency of marking man-to-man, so we wanted to take advantage of that tendency. I was anticipating to get in front of the defenders, and it worked out well when we scored the opening goal. 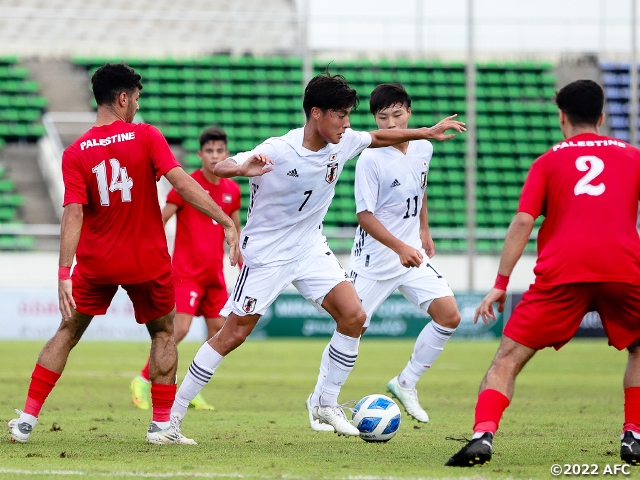 FW #9 CHIBA Kanta (FC Imabari)
With our opponents dropping deep in their territory, we struggled to create chances in the outset. The pitch condition and the tough match schedule also had an affect on us as well. However, we knew that we could win the match as long as we can show our quality, so I am glad we were able to win. We are also aware of all the support we have been receiving through SNS, so we want to respond by delivering positive results to Japan.

FW #11 SAKAMOTO Isa (Gamba Osaka)
It was tough in the early minutes, but the match opened up after we scored the opening goal, and I am glad I was able to score within the first half. When I scored my first goal, I was anticipating for a deflection when Kitano struck a shot. I am getting the sense that we are getting better with each match.