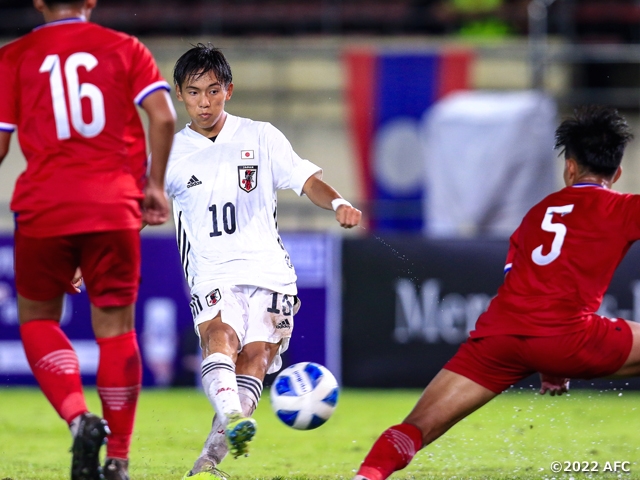 For Japan, this was their first match of the qualifier, while it was the second match for Laos. With heavy rain falling before the start of the match, kick-off was delayed for about 30 minutes and the match had to be played on a waterlogged pitch, which imposed a challenge for the Japanese players both physically and mentally. 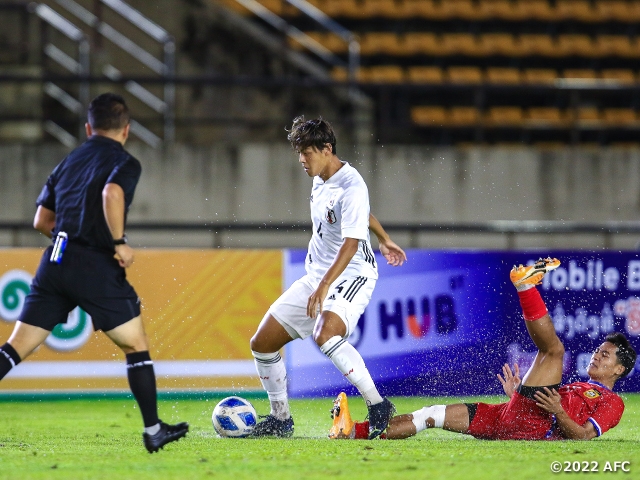 The weather and pitch condition forced the two sides to keep their plays simple in the early minutes, while the crowd of 9,225 enthusiastically cheered on the home side, as Sakamoto later described, “It was a completely away atmosphere.” Despite the circumstances, the Japanese players showcased great composure on the pitch, as coach Togashi later reflected, “The players handled the situation very well.”

The opening goal came in the 21st minute, when Einaga broke through the left flank before sending an early cross towards the far side. It was Sakamoto who converted the cross with a header to give Japan the lead, as the striker later reflected on the play, “Einaga’s delivery was well-timed and so accurate that I only had to make contract to score.” 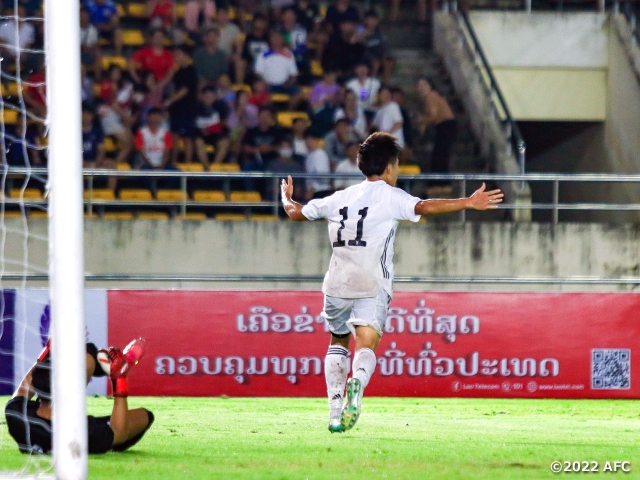 Laos also created close chances through set-pieces, but the Japanese defence displayed great coverage to keep the opponents from scoring a goal. Einaga assisted another goal with his cross, this time setting up the header of Yamane in the 44th minute to double the Japanese lead. With momentum on their side, Japan scored back to back goals in the 63rd and 69th minute to extend the lead to 4-0. 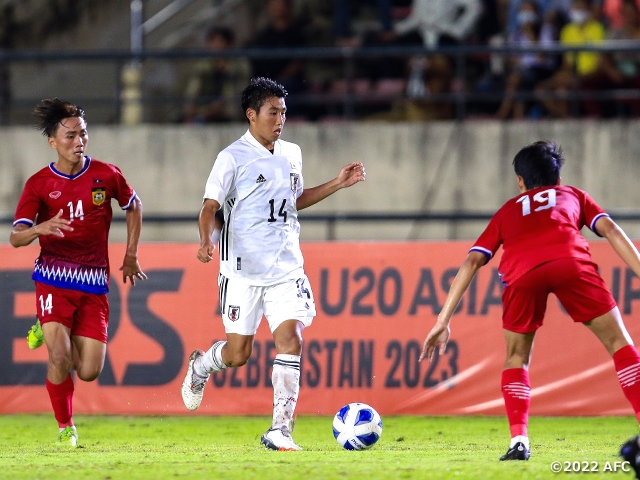 With their defence keeping a clean sheet, Japan won the match 4-0, in a match coach Togashi described, “It was a match that really reminded us that the overall level of football in Asia has risen over the recent years.” The coach also praised his players performance, “Throughout the match, they showed their ability to manage risks while also seeking for their opportunities to press forward.”

TOGASHI Koichi, Head Coach of U-19 Japan National Team
Many things happened before the match, including the inclement weather. The venue staff worked very hard to prepare the pitch and decided to delay the start of the match by half an hour, which we really appreciate, because I don’t think we would have been able to play football if the pitch condition stayed that way. We are going to take one match at a time, so we will concentrate on beating our next opponent, Guam, rather than thinking about the matches ahead.

DF #4 KIKUCHI Shuta (V-Varen Nagasaki)
We entered the match with the intention of keeping our plays simple. I worked closely with Tanaka, Nakano, and Matsuda to keep the clean sheet intact. We also made conscious efforts not to pass the ball back (because of the pitch condition). Including the stadium’s atmosphere, everything we experience here is something we cannot experience in Japan, so I feel fortunate to be given this opportunity.

MF #6 YAMANE Riku (Yokohama F. Marinos)
Instead of being negative about the whole circumstance, we wanted to make the most of the given situation and make it into a positive learning experience as a team. The opener scored by Sakamoto was huge. The second goal came from a play I wasn’t used to, but considering the pitch condition, I was anticipating scoring from crosses delivered from the flanks.

FW #11 SAKAMOTO Isa (Gamba Osaka)
The atmosphere and pitch condition were very different from the J.League matches, so it took us a while to get used to the whole situation. However, once we got used to the away atmosphere, we were able to play with composure for the remainder of the match. I was determined to score the opening goal, so I am glad I was able to do just that. The fact that I was able to convert my first opportunity might have helped the team gain momentum.