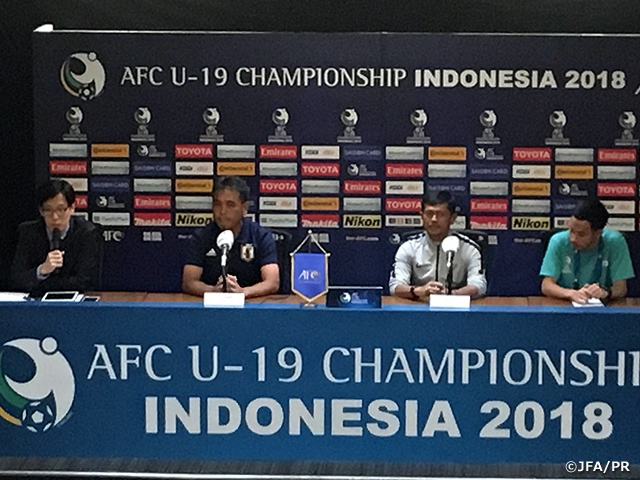 Following the conclusion of the group stage matches of the AFC U-19 Championship Indonesia 2018, the fixtures of the knockout stage has been determined. Japan will face Indonesia, Qatar to square off against Thailand, Korea Republic to play Tajikistan, and Saudi Arabia facing Australia.

On Sunday 27 October, one day before their clash against Indonesia, the U-19 Japan National Team Coach KAGEYAMA Masanaga appeared in an official press-conference along with the U-19 Indonesia National Team Coach Indra Sjafri. The Japanese coach stated, “We have been performing well up until this point. Tomorrow’s match will be a crucial match for us. We will prepare ourselves so that we can adjust to any situations.” Coach Indra followed by mentioning, “We have won our matches in great form. We will win our match tomorrow and earn our spot into the FIFA U-20 World Cup.” During the question and answer session with the media, it was revealed that 55,000 tickets were pre-sold for this upcoming match, making it a complete away match for the Japanese side. 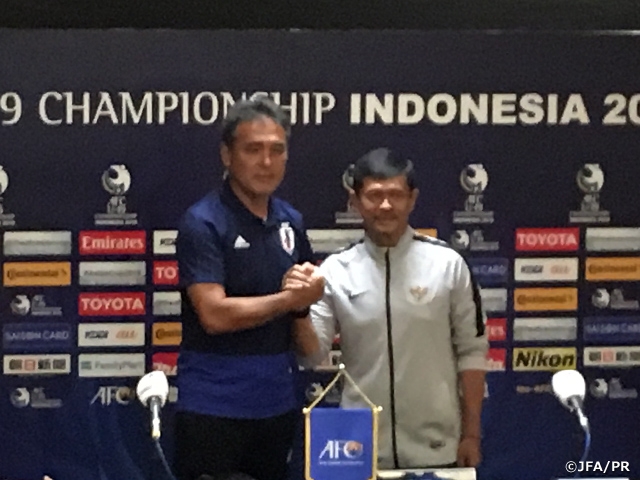 The team visited the match venue, Gelora Bung Karno Main Stadium in the evening to check out the pitch condition. They then returned to their training site to conduct a final tune-up session ahead of the match. As the players were told that, “This will be a short session, but let’s stay focused and make it a productive one,” they showed great enthusiasm to build up their concentration level ahead of the big match.

The quarterfinal match against Indonesia will kick-off at 19:30 (21:30 Japan time) on Sunday 28 October. 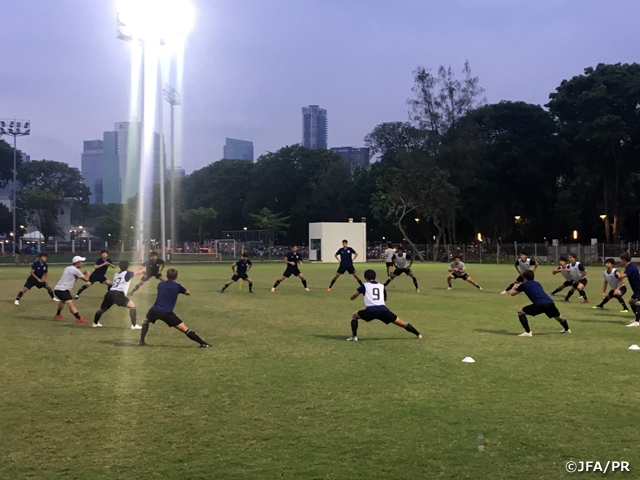 KAGEYAMA Masanaga, Coach (U-19 Japan National Team)
We have faced Indonesia in March, and although they may have changed their style since then, they left an impression that they have great speed and individual techniques. And in this tournament, they have been showcasing their persistence to fight through the entire match, along with a strong willingness to win the match. We will prepare ourselves so that we can adjust to any given situations and perform up to our full potential.

The pitch condition seemed to have worsened since we played here in March, and we may not be able to showcase a beautiful style of football here, but we will keep our focus and try to win the ball before our opponents. It’s not the nifty skills that will prevail here, but rather the fundamentals will make the difference tomorrow. Our staffs have done a great job to keep our players in great condition. We still have some time ahead of the match, so they shall be in better form by tomorrow.

Compared to the other Asian teams, Japan has the upper hand in the ability to improve themselves through trainings and matches. Our players have shown great development through the matches and it gives me great confidence. We will be asked to do a lot more in tomorrow’s match to come out as the winner, but I am confident that our team can perform well regardless of who starts the match. I am hoping that our players will be able to showcase their individual talent on top of the fundamental team tactics, to help the team pull off the win.

MF #6 SAITO Mitsuki (Shonan Bellmare)
The sense of urgency has been building up, and it is helping us create a positive atmosphere. Indonesia consists players with great speed and power. On top of it, they will be playing at home tomorrow. We must stay alerted and find out ways to take the initiative of the match. We know that they will attack aggressively from their front line, but we should not respond passively against them. We must win each fifty-fifty ball and outrun our opponents. By winning these matches, we will gain more opportunities in the future. We will focus on earning good results in our match tomorrow.

FW #9 KUBO Takefusa (Yokohama F・Marinos)
We have managed to build our team through each and every match. This will be our fourth match, but we will continue to strive for higher stages while we heighten the quality our collective plays as a team. I have played in this stadium during the preseason, and I have a good idea of what the match will be like tomorrow. I know many of our players have also played in this stadium before, so we will share each of our experiences to prepare ourselves ahead of tomorrow’s match. It’s important that we don’t make this a tough match on ourselves to start with. I think it’s good to encourage ourselves by telling each other that we have a tough match ahead of us, but we don’t want to take that too far and stress out the team. We need to stay relaxed while we build up our concentration level. We will perform as usual and manage the match in our favour. We will prepare ourselves well and fight as a team so that we can earn good results in our match tomorrow.

FW #11 TAGAWA Kyosuke (Sagan Tosu)
We were able to conduct today’s training session in probably the best atmosphere of this tournament, and I can tell that we are in great condition right now. I am in good form as well and I am not worried about anything in that aspect. I have an impression that the Indonesian players are very athletic and knowing that they will have the home crowd on their side, I am sure that they will come out even more aggressively tomorrow. We will not back down and fight for each ball. I think those fundamental aspects will decide the match. Our team has developed our combinations throughout the matches, so we will continue to build on that and showcase a good collective effort in tomorrow’s match. We will be presented with a tough challenge tomorrow, but we will fight as a team. I would like to contribute to the team by scoring a goal, but more than anything, I want my team to win, so we will prepare ourselves well ahead of the match.