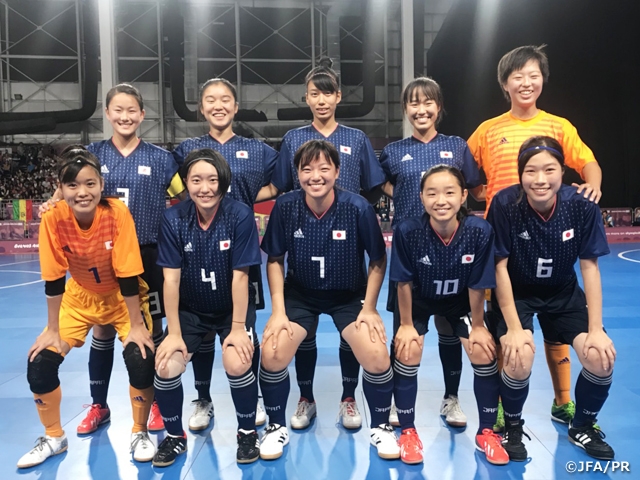 With the world title at stake, Japan faced Portugal, who they faced in their fourth group stage match. The match started off with Portugal launching a lobbing shot from half-way that captured the goal. Facing a Portugal side who has the upper hand in both speed and technique, Japan applied aggressive pressure from the front line to create opportunities but came short from scoring the goal. Conversely, Portugal’s GONCALVES Ana Sofia, who already plays for the Portugal Women's Futsal National Team, scored a hat-trick within the first half to send the match into halftime with a score of 0-3.

Early in the second half, Goncalves captured her fourth goal of the match in the 22nd minute. In the following kick-off, Japan’s MAEDA Miu dribbled the ball upfront before sending a pass to YAMAKAWA Rikako who converted the pass to score the team’s first goal. Japan tried to pick up their momentum and score more goals, but ran out of time, as the match ended with a final score of 1-4.

As a result, Portugal was crowned as champions, while Japan finished second and Spain in third.

Numbers of players who participated in this Youth Olympic Futsal Tournament will now play in the JFA 15th Japan Women's Futsal Championship, which will be held in Ishikawa prefecture from Friday 2 to Sunday 4 November, to compete for the national title.

The players fought courageously at this stage of the Youth Olympic Futsal Tournament final. The team is always evaluated by the results, but their performance on the court and their efforts shown during the process which led to this stage, are something they should be proud of. I am very proud of these 10 players. At the same time, I would like to express my gratitude once against towards the 14 players who fought through the AFC Women's Futsal Championship Thailand 2018 to qualify for this tournament. This team has taken the Japan futsal community into new heights, and their achievement is a result of all the efforts made by everyone who has been involved with the Japanese futsal community. Next time, we will strive to become number one in the world. Thank you for all of your support.