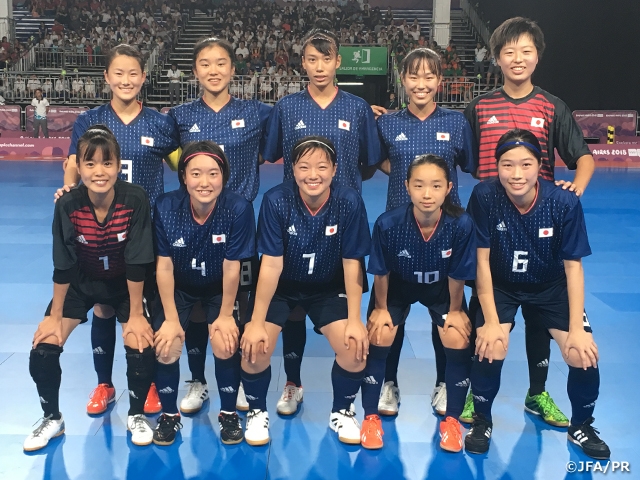 With this match being the first match of their first ever international tournament, Coach KOGURE Kenichiro sent off his players by telling them, “Let’s give our very best performance and leave no regrets. We must stay vocal and support each other in times of difficulties. If we can do that, positive results should follow.”

Facing a Cameroon side who are physically stronger and consists great speed, Japan applied aggressive pressure from their front line to force turnovers. In the eighth minute, MAEDA Miu captured the opening goal from a corner kick, followed by YAMAKAWA Rikako’s goal in the ninth minute to enter the halftime with a 2-0 lead.

Yamakawa opened up the second half with another goal to further extend their lead. Despite conceding two goals against Cameroon, with the help of the goals scored by MIYAMOTO Mai, Maeda, and OINO Sara, Japan managed to win the match with a final score of 6-2.

Japan’s next group stage match is scheduled to kick-off at 14:00 on Wednesday 10 October, where the team will face the U-18 Futsal Chile Women's Futsal National Team.

#5 OINO Sara (Laufen)
This was our first ever international match. The Cameroonian players were physically much stronger than us, but we managed to match their intensity and play our game. I was able to find out many personal aspects I must improve on and I will work on those aspects in tomorrow’s training session. We will give our very best in our next match so that we can live up to our supporters’ expectations.

#10 IKEUCHI Aki (Fukui Maruoka RUCK)
By winning our first match, we were able to gain great momentum. With this being our first ever international match, we looked a little stiff at first, and our defence were unstable. However, we stayed vocal and eventually found our rhythm. The Cameroonian players were very fast, and they were also very athletic, but we stayed aggressive in defence and managed to contain them from playing freely. I feel like we were able to display what we have worked on in our training sessions while showcasing our strengths. We will continue to enjoy playing as team in our next match.