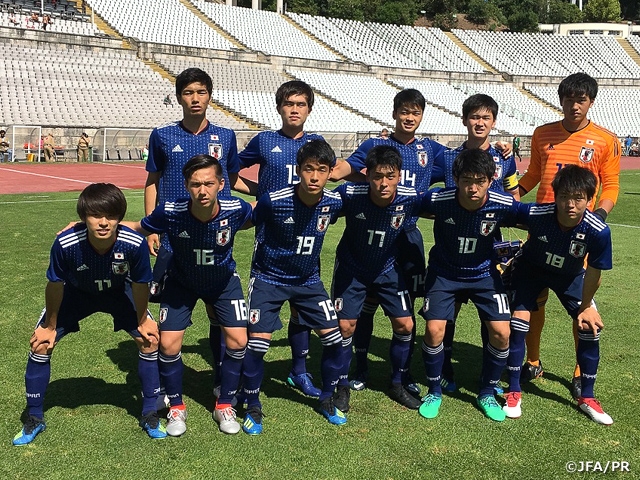 On the final day of the 24th Lisbon International U18 Tournament, the U-18 Japan National Team lost a close battle against the U-18 Norway National Team 1-2, and missed out on their opportunity to win the title. Japan has lost the same matchup 0-1 last year in the same tournament. Despite their record of one draw and one loss before the match against Japan, the Norwegian side played close battles against Portugal and Czech Republic in this year’s tournament.

With the title at stake for Japan, the temperature rose over 30 degrees Celsius at kick-off time. The early minutes saw Japan struggling against the pitch condition and the physical approach taken by the Norwegian players. Japan were seen turning over the ball easily numerous times, as Norway scored the opening goal in the seventh minute off a counter attack after Japan gave up the ball in the midfield. In efforts to level the match, Japanese midfielder TSUBAKI Naoki took a shot from a cross delivered from NAKAMURA Takumi, but his effort sailed off the target. In the 11th minute, HIRAKAWA Rei switched sides with a long ball where Nakamura superbly trapped the ball before launching a shot, but his effort also couldn’t find the target. Norway on the other hand, attempted many long balls toward their tall forwards, taking advantage of the height difference. Japan’s patience was tested as they struggled to win the ball following the long balls. Japan kept on attacking as MIYASHIRO Taisei, KOZUKI Soichiro, and SAITO Koki combined well upfront. In the 28th minute, Tsubaki fired a volley off a cross, but his shot effort was denied by an outstanding save made by the opposing goalkeeper. While Japan came short from scoring the equaliser, Norway extended their lead in the 40th minute, where their counter attack following a long ball driven in the centre led to their second goal. Japan was given their opportunity to close up the gap in the 42nd minute, when Saito pounced on a passing error made by Norway, creating a one-on-one situation against the goalkeeper, but his shot went just wide of the goal, ending the first half with a score of 0-2.

In preparation for the grind, and to score goals, Japan made multiple substitutions during halftime. In the 51st minute, Hirakawa received the ball in the centre, carried up the ball and took on a defender before launching a shot. His effort found the right-hand corner of the goal, cutting down Japan’s deficit in half. The goal gave Japan the momentum to win the battles in fifty-fifty situations and quicken their transitions, however, the Norwegian side showed great persistence to keep their one goal lead. In the 68th minute, forward MIZUNO Yuta, who was subbed in during halftime, fired a shot after a combination of passes, only to see it go off the target. Japan kept on the pressure while Norway committed themselves in defence in the remaining minutes, but the final whistle blew before Japan found the net, ending the match with a final score of 1-2. The U-18 Portugal National Team bested the U-18 Czech Republic National Team 2-1, and with this result, Japan and Portugal were tied in first place with six points, but due to tournament regulations, Portugal took the title as they led Japan in goal differentials. In their search for their first title at the Lisbon International, the final loss came with a big cost for them. 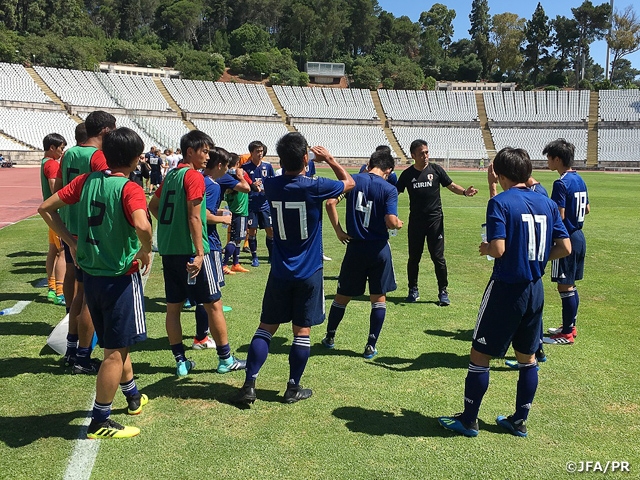 KAGEYAMA Masanaga, Coach (U-18 Japan National Team)
The 24th Lisbon International U18 Tournament was the first activity for this year’s U-18 Japan National Team. This is the same generation who played in the FIFA U-17 World Cup India in 2017, and this travel squad was based on the members who participated in the Cup, while we added some new faces as well. Their participation served not only to strengthen the U-18 national team, but it also served as a selection process for the U-19 national team ahead of the AFC U-19 Championship Malaysia 2018.

The players have gone through a tough schedule, as we conducted four sessions in two days to nurture the team concept as well as to train the objectives of both offence and defence, while playing three matches in five days. But the players showed great understanding of the team concept and gave their best to display their characteristics.

In efforts to make their way into the upper age categories, some players managed to play to their fullest, while some couldn’t quite do so. In our last match against Norway, where we played with the title at stake, we learned the impact of conceding goals in the hard way. Although we missed out on winning the title, I believe the players were able to take a look at their own plays during this tour. Especially the way they played aggressively to force turnovers and initiated quick attacks in the second match against Portugal showed how well they understand football. I would like to take this time to thank everyone who has allowed this tour possible, including the players’ club teams who allowed them to join this team. Thank you very much.

DF #3 NAKAMURA Toya (Hokkaido Consadole Sapporo U-18)
It was an honour to be selected into the U-18 Japan National Team, and to spend the week with the team. I will continue to work hard at my club so that I will be selected in to the national team moving forward. Today we played a match with the title at stake but conceded two early goals. Despite the tough situation, we managed to create many chances by penetrating the flanks against the opponents playing deep defence. However, at the end, we couldn’t level the match and missed our opportunity to win the tournament. We lacked stability when facing teams with stronger physicals. Even though we couldn’t win the title, I still got to play with teammates and play against teams at a high level, which is a rare experience for me. I will like to feed off of this experience and utilise it for my own growth. I will continue to train at my club with this experience and the world level in mind.

MF #4 HIRAKAWA Rei (FC Tokyo)
Following the Osaka training camp for the U-19 Japan National Team, it is an honour to be selected into the U-18 Japan National Team. I entered the tour determined to earn results. It was regretful that we couldn’t win in the deciding match today. At a personal stand point, I am glad I managed to score a goal, but as the team captain, the fact I couldn’t lead the team to victory shows that I still need to improve. As a team, we lacked attacking options when facing a team playing deep defence. We will return to our clubs, but we will continue to keep our focal point towards the world and strive to be selected into the national team again.

FW #11 SAITO Koki (Yokohama FC Youth)
I am glad to be selected into the U-18 Japan National Team along with those who played in the FIFA U-17 World Cup India 2017. We have bitter memories from the World Cup, so we wanted to show our growth in this tournament. I am happy I was able to assist the winning goal as a substitute in our match against Portugal, but today’s match was very disappointing. After we conceded the two goals, I had a few chances where I could have scored, but the fact I couldn’t score shows that still have long ways to go. During this tour, I managed to create many opportunities with my dribbles, but I couldn’t display my strong point, which is the ability to find and exploit the space behind the defenders. I felt the need to make more runs and demand for the ball more often. As a forward, I must be able to score more goals, so once I return to my club, I will train to get stronger and enhance my ability to score goals. 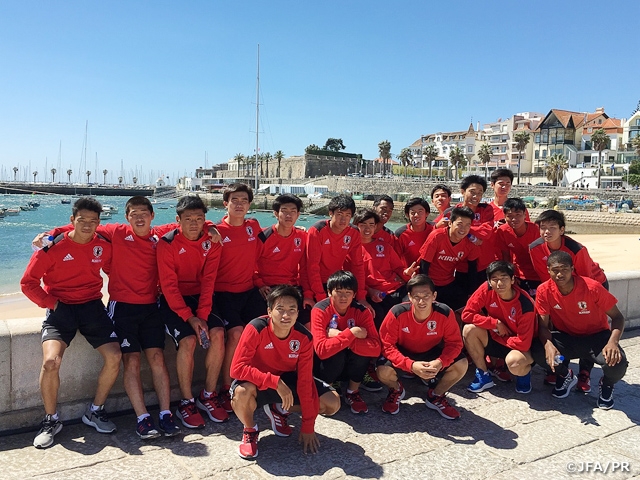