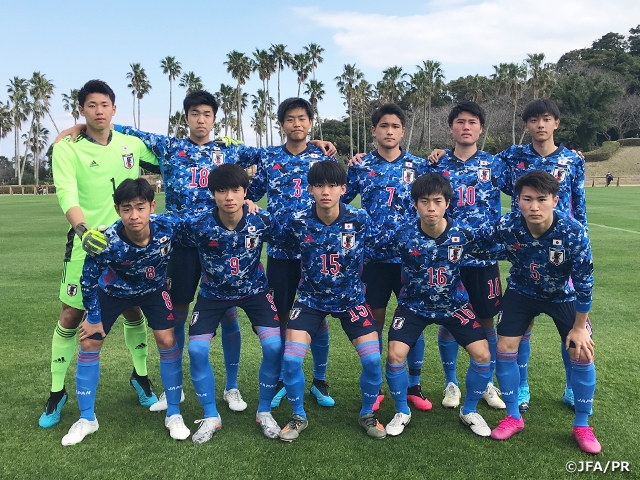 The U-17 Japan National Team played their first group match of the JENESYS2019 Youth Football Exchange Tournament against the Kagoshima Selection U-18 on Wednesday 26 February.

The match saw an early goal scored by the national team, as HIGASHI Ren converted a cross from the right flank to give his side the lead in the fourth minute. Forward KATSUSHIMA Shinnosuke followed in the 12th minute to double the lead with a powerful shot that shook the net. Kagoshima Selection Team responded by creating numbers of major opportunities through their counterattacks and side-attacks but fell short from scoring a goal. Katsushima came close to scoring another goal at the end of the first half, when he responded to a through ball sent by SHIMIZU Kazuma but failed to convert the one-on-one against the goalkeeper, as the match entered halftime 2-0 in favour of the national team.

In efforts to rally back, Kagoshima Selection Team started the second half with a crucial goal scoring opportunity, but goalkeeper TAKAHASHI Ippei made a brilliant save to keep the local side from scoring. With the team picking up momentum from this play, the national team started to apply aggressive pressure from their frontline and force turnovers deep in the opposing territory. Following the goal scored by AOKI Shunsuke in the 47th minute, the national team went onto a scoring spree, as the team scored five goals within the first 15 minutes of the second half.

Despite conceding a late goal to Kagoshima Selection Team, the U-17 Japan National Team started off the tournament with a 7-1 victory. The team will face the U-19 Laos National Team on Thursday 27 February. 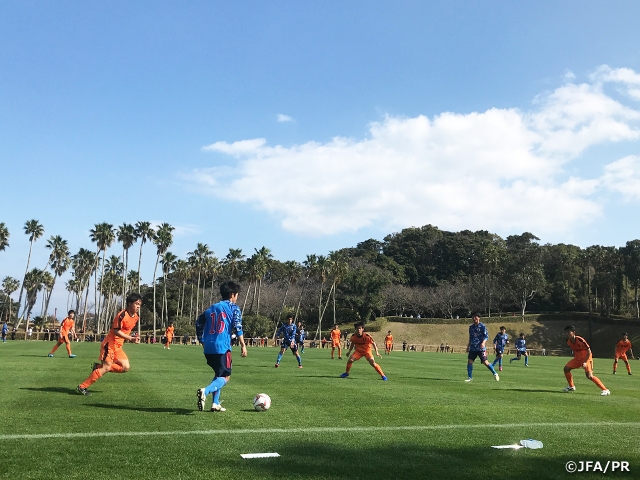 DF #15 MATSUDA Hayate (JFA Academy Fukushima U18)
In this match against the Kagoshima Selection Team, we were able to showcase our ability to convert chances in the final third and win the match 7-1. Although I was able to get myself involved in our offence to create chances, the quality of my passes was not great, so I hope to improve the quality in our next match.

MF #5 AOKI Shunsuke (Higashi Fukuoka High School)
With this being our first match of the tournament, we looked a bit nervous, but it was great that we managed to score an early goal. As a team, we were able to score goals from plays we worked in our trainings. We hope to raise the quality of our plays even higher by communicating with each other and strive to win the remaining three matches. I will also try to earn positive individual results.

MF #8 YASUDA Kojiro (FC Tokyo U-18)
We managed to stay vocal and apply collective pressure to initiate counterattacks, which led us to scoring multiple goals in this match against the Kagoshima Selection Team. However, we still made many simple mistakes in offence, so I felt the need to improve the quality of our plays. 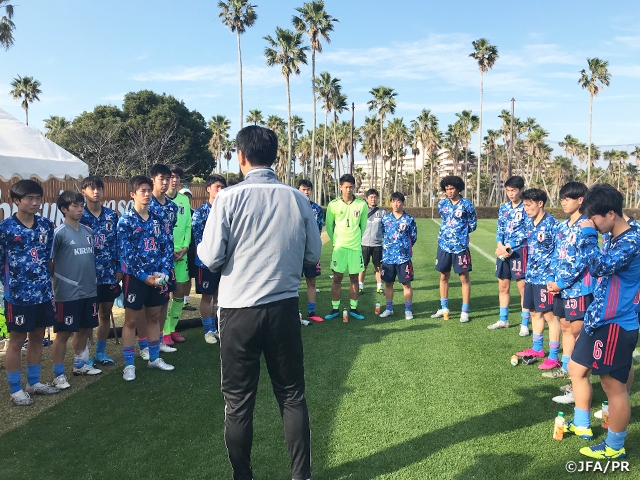