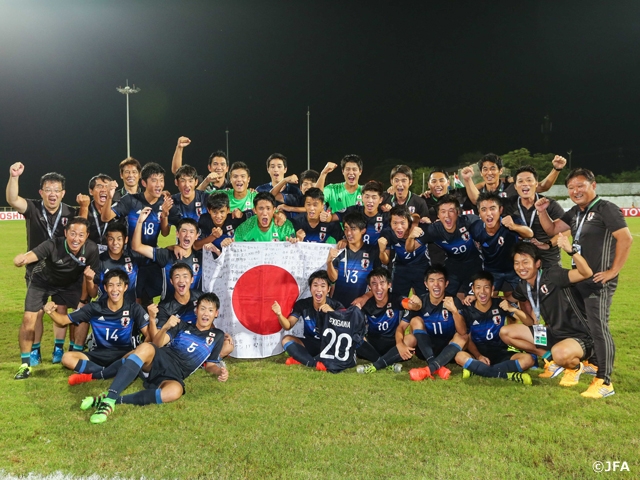 ‘00 Japan’ succeeded in opening the door to the world stage!

The opponents were the U-16 UAE, who managed to win close games in Group A. The UAE is a strong country with significant youth-level development. In the Final Asian Qualifiers the other day, SAMURAI BLUE (the Japan National Team) suffered a defeat against them.

The match to secure a spot in the FIFA U-17 World Cup started amid mounting tension. Japan stole the ball through rapid switches between offence and defence, initiating attacks from the wings while passing the ball around. The UAE, on the other hand, mainly used long-distance balls, waiting for opportunities to counter-attack.

Although neither of the teams succeeded in creating any goal-scoring opportunities for a while, midfielder KIDA Hinata took a strong long-distance shot in the 14th minute, which let Japan gradually find their rhythm. After 31 minutes, Japan struck the much-awaited opener. After several close attempts from Japan’s corner kicks, the opponents’ goalkeeper fumbled a shot from forward KUBO Takefusa, and defender SEKO Ayumu tenaciously slotted it into the goal. All of the players erupted with joy.

For the remainder of the first half, defenders Seko and SUGAWARA Yukinari stayed focused to fend off the opponents’ attacks from long-distance balls. The match went into halftime 1-0.

In the second half, Japan reacted calmly to the opponents, who used long-distance balls more often than in the first half. In the 67th minute, forward, YAMADA Hiroto, who just came off the bench, got through to face the goalkeeper one-on-one and fired a shot, only for it to go outside the goalpost. After 71 minutes, Yamada again could not capitalise on the scoring chance.

The UAE created a promising chance in the 75th minute. Japan let them go through the right to send in a cross, where the unmarked forward freely took a shot. However, goalkeeper TANI Kosei calmly punched it away, preventing the opponents from scoring the equaliser. After 81 minutes, forward MIYASHIRO Taisei was taken down by the opponent and earned a penalty kick. Miyashiro took it himself, but it cruelly hit the right post. Although his failure could have impacted the match, Japan remained calm. They stayed focused to defend against fierce attacks from the opponents and maintained their one-goal lead until the final whistle.

For the eighth time ‘00 Japan’ booked a place at the FIFA U-17 World Cup for the first time in two tournaments.

In the semi-final, the team will meet the winner of the game between U-16 Uzbekistan and U-16 Iran. ‘00 Japan’ will continue their pursuit to become the best in Asia.

* "00 JAPAN" is the nickname of the U-16 Japan National Team that consists of members who were born after 2000. 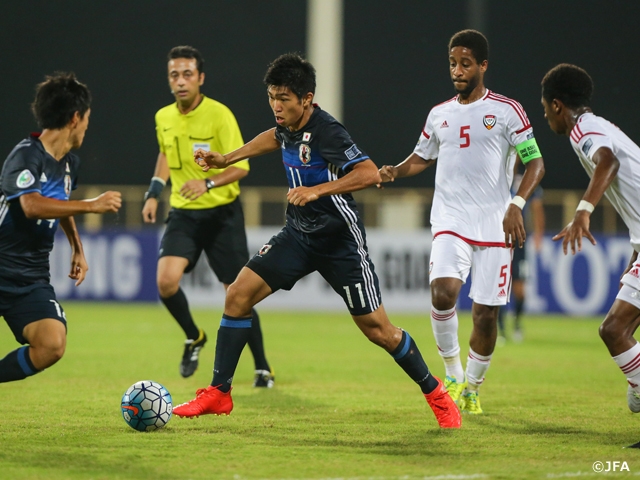 MORIYAMA Yoshiro, Coach
We could calmly pass the ball around in the first half, but we struggled a lot in the second half against the opponents, who were determined to score. Despite our numerous opportunities to add insurance, the accuracy of our shots was not good enough. Having said that, it was an excellent experience for us to win a game 1-0. I believe this victory meant a lot to us, as the players defended tenaciously to maintain their lead.

We have had many training camps and trips since the team were assembled one and a half years ago. We didn’t aim to win the championship, but just stayed focused on each coming game. As I expected today’s match to be tough, I’m really relieved that we won it. Now we can make a new start onto the world stage.

MF #10 FUKUOKA Shimpei (Kyoto Sanga F.C. U-18)
We earned today’s win together as a united team. We played tenaciously until the final whistle, maintaining our one-goal lead. Winning the game 1-0 was a good experience for us for the future. We will be able to improve ourselves even more by managing to win a difficult game and booking a place in the World Cup.

FW #14 TANAHASHI Akito (Yokohama F・Marinos Youth)
I’m over the moon that we gained a spot in the World Cup. We achieved one of our aims, which we’ve been working towards since this team was assembled. I just want to really enjoy this victory that we earned with my excellent teammates. I’ll continue to play hard to win the remaining two games and the championship.

FW #9 KUBO Takefusa (F.C. Tokyo U-18)
I’m chuffed that we achieved our first aim – to play in the World Cup. However, this is only a ticket to the world stage. So I’d like to continue to work on improving the team as well as myself.

DF #5 SEKO Ayumu (Cerezo Osaka U-18)
I’m delighted that I scored a deciding goal and contributed to the team’s victory. I’m truly grateful to my teammates.

DF #7 SUGAWARA Yukinari (Nagoya Grampus U18)
I’m really pleased with today’s victory. The encouragement from many of our supporters brought us strength. I’d like to maintain our momentum until the final and win the championship. We want to participate in the World Cup as the champions of Asia. 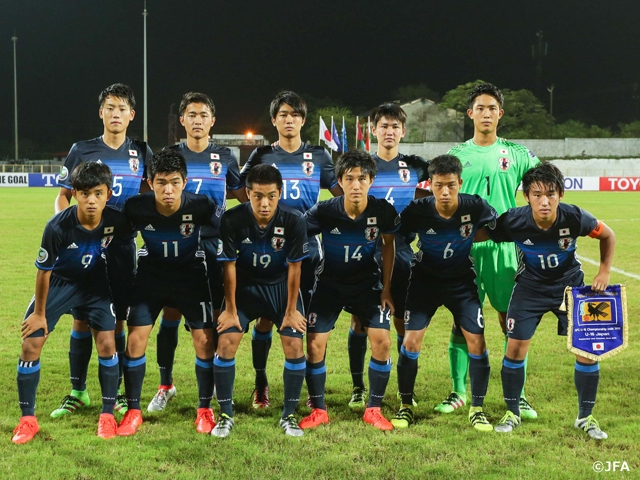 *Local Time
*The schedule is subject to change due to the team condition, the weather, etc.
*If India, the hosting country of 2017 FIFA U-17 World Cup, advances to the semifinals, the playoff matches will be held on 29 September and 2 October deciding the fifth place among the four losing teams in the quarterfinals.