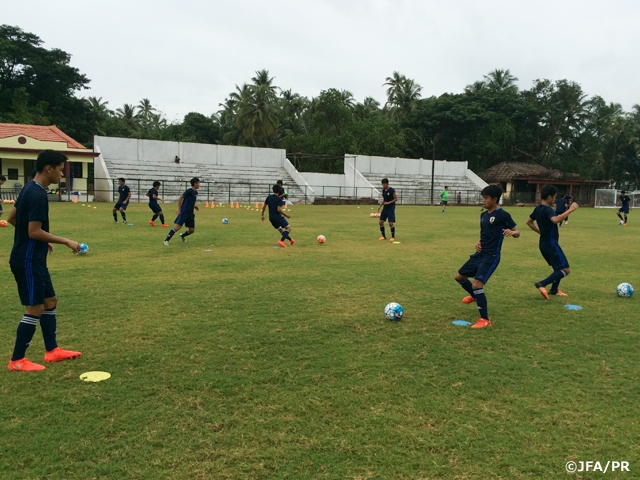 ‘00 Japan’, the U-16 Japan National Team, which has built positive momentum with two consecutive wins following their victory in the second group stage match against U-16 Kyrgyz Republic, held only one training session in the morning the following day after the game.

Just like the day after their first game, the players who had been on the pitch in the match, focused on recovering, while the rest of the players practiced in a game format for one hour. Another match in the same group was held yesterday, and U-16 Vietnam won against U-16 Australia. As a result, ’00 Japan’ have already secured the top spot in the group to advance to the next stage with one game remaining against U-16 Australia.

The coach MORIYAMA Yoshiro reviewed the two previous games and told the players to brace themselves: ‘your effort brought positive results. But, we haven’t achieved anything yet.’ 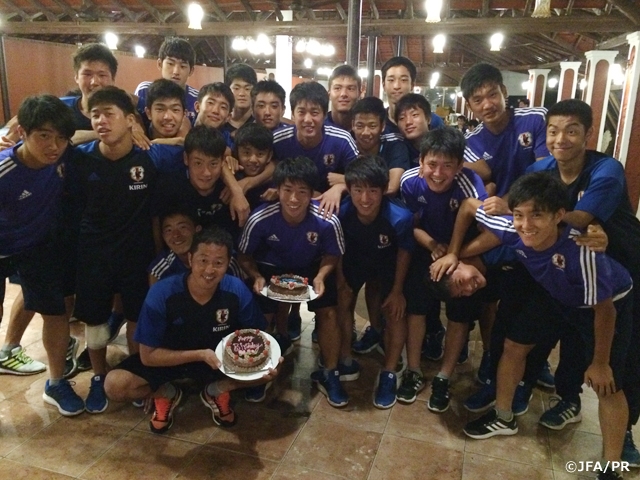 ‘00 Japan’ held one training session in the afternoon prior to the third group stage game against U-16 Australia the following day. The players were highly motivated to play a practice game in preparation for the match.

Although ‘00 Japan’ have already booked a place in the next stage and the opponent U-16 Australia have failed to get through to the group stage, this match will be vital for the coming quarterfinal which will qualify teams for a spot in the World Cup.

* "00 JAPAN" is the nickname of the U-16 Japan National Team that consists of members who were born after 2000. 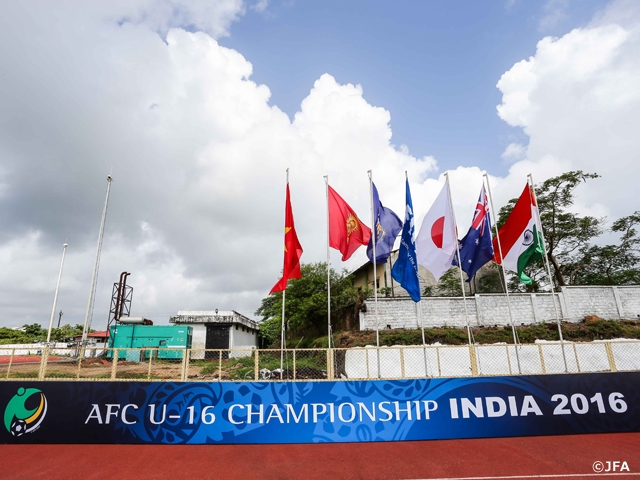 GK ＃23  OUCHI Issei (Yokohama FC Youth)
I believe we have been performing well, winning two consecutive games in good order. The coming match against Australia is vital and we must win to maintain our positive momentum. As the coach told us, I’d like to brace myself, and take care of my physical condition. Even though we are in the lead by a considerable margin, we don’t want to become too relaxed.

DF ＃2  KATSURA Rikuto (Sanfrecce Hiroshima Youth)
I didn’t have an opportunity to play in the first game, but I came off the bench in the second. I played carefully not to concede a goal, since my team had already built a lead. I contributed to the team, so that we could build up more positive momentum. Although we have performed well in the past two games, I’m hoping to play even better to win the championship. I was so pleased that my teammates celebrated my birthday. They are such a good team. I’m determined to book a place in the World Cup, so that we can continue to play in this team.

MF ＃4  HIRAKAWA Rei (F.C. Tokyo U-18)
I believe we had been preparing and performing well in the previous two games. I’d like to win tomorrow’s game for sure, so that we can bring something positive for the next match. Personally, since there is still room to improve in many aspects, I’d like to focus on the quality of each play. I’d like to focus on booking a place in the World Cup first, and then win through the championship to claim the title.

*Local Time
*The schedule is subject to change due to the team condition, the weather, etc.
*If India, the hosting country of 2017 FIFA U-17 World Cup, advances to the semifinals, the playoff matches will be held on 29 September and 2 October deciding the fifth place among the four losing teams in the quarterfinals.