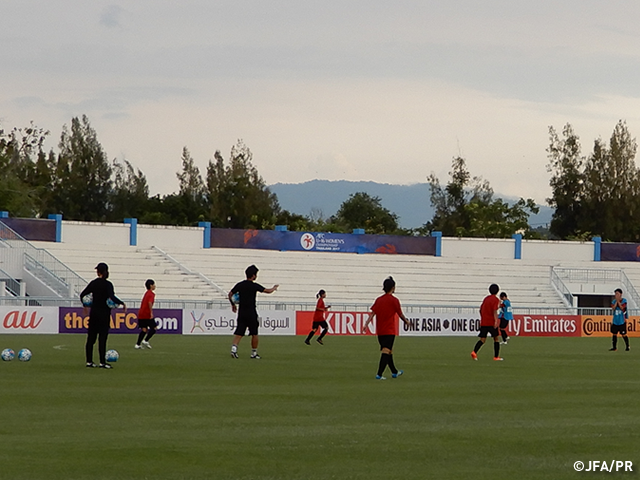 The Asian Football Confederation held an official press conference in the morning one day prior to the commencement of the AFC U-16 Women’s Championship Thailand 2017.

In the afternoon, the Japanese women’s team held an official training at the match venue, IPE Stadium, and worked on set pieces and few other plays ahead of the important opening match against the U-16 Australia Women’s National Team the day after tomorrow. They are scheduled to have training tomorrow as well.

DF #15 ARAI Miyu (JFA Academy Fukushima)
We had our training while putting our main emphasis on defence. I felt that in defence it is important to talk to everyone on the pitch and decide on where to rob the ball. We only have two more days before the tournament opener. We have to communicate more proactively before finalising the team in the limited time we have remaining as well.

MF #12 NAKAE Moe (Albirex Niigata Ladies U-18)
In the official training held at the match venue, we were working mainly on defence. While forward player were restricting the playing area of the opponents, midfielders and defenders were instructed to make quick shifts in zonal marking to rob the ball. There were times when shifting of defensive blocks was too slow to rob the ball, but still I have a good image now of how to execute them well. I would be reflecting on the things that we practised today and continue to work on them tomorrow.

MF #16 WATANABE Rin (Fujieda Junshin High School)
Our main objectives in the 6v6v6 training today were quick pressing and making swift shifts of defensive blocks. We then moved to the match venue to work on set pieces. On different pitches that we practised so far, the grass in the stadium was trimmed nicely for playing football. However, we are uncertain about the playing conditions as well as having game-time jitters on the day of the match. We might not be able to play as well as we expected as well. Therefore, we need to encourage each other on the pitch in order for us to win the upcoming game against Australia in two days before aiming to book a place in the U-17 World Cup and win the AFC Championship. Lastly, in pursuit of this goal, we need to get in top form by also eating and resting well and make the best possible preparations for the upcoming matches of the tournament.